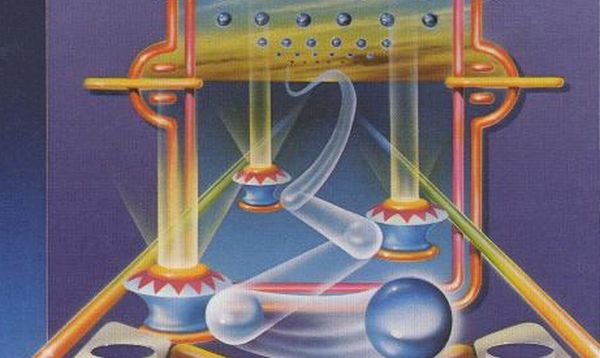 Anyone could dismiss Video Pinball as redundant thanks to the abundance of pinball simulators. Heck, you can easily download one and ignore Video Pinball all together and I wouldn't blame you. However, there are a select few of us who still pine for a simple score-attacker that oozes old school sensibilities. No, Video Pinball isn't intended to perfectly ape a pinball machine. Rather, it adapts the rules and concept into a product that's more at home with Atari 2600's brand of primitive, fast-paced, and addictive gaming. That sounds like a winning combo to me.

Where did I put my walker and dentures?

As you can tell, the objective hasn't changed much. You ram your ball into stimuli for points, attempt to beat your old scores, and then brag to others in the hopes of making them swoon. After launching the orb, you are in control of three items: the two flippers at the bottom and the ball itself. Using the joystick, you can move the flippers either individually or simultaneously to thwack the ball back upward. Timing is key, though, as there are times when the ball hits the flippers and stops dead. By pressing and holding the fire button and moving the joystick, you can ''tilt'' the table and move the ball anywhere you want at any time. Unfortunately, if you do this for too long, the game will penalize you by activating a kill switch that sends you into the gutter. However, the fact that you can tilt lends more of the an authentic pinball element to the experience. The best part about this is that the ball actually moves about the same speed as a regular pinball when you tilt. 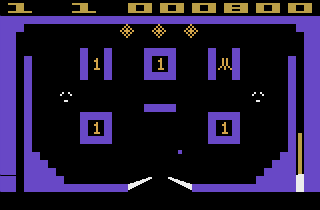 Unlike other pinball games, you can advance levels in Video Pinball. To do so, all you must do is nab a few diamonds from the top of the screen, then you begin the task anew. Accomplishing this is not always a simple request. Sometimes you run out of momentum and the only thing that can save you is a clever, well-timed hit. On top of that, tilting is a must, even though its technically cheating in actual pinball. Sometimes there's no other way to coax the sphere into dropping down the correct pathway so you can grab a diamond. You just have to know when to do it and how long is acceptable before the game decides to pull the plug.

If you've played this game, then you may have noticed something missing: music. This is a good thing, trust me. Given the type of actual ''soundtracks'' we've heard from Atari games, an ear-splitting score could have tarnished this one. In place of the annoying humdrum, we get brief sound effects as the ball pongs its way around the screen. Although these tiny sounds add to the game, they don't contribute as strongly as the silence does. It's almost as if the game wants you to concentrate.

The game's overall presentation is humble. The stages do not feature expansive color pallets, but keep the visuals cool and simple. To create a simulation of any device is difficult yet doable, but to do so effectively with antiquated hardware is impressive. The developer, Bob Smith, had his work cut out for him, as there were many facets to consider when deciding what to feature in the game what to leave out. "Let's not just make a regular old pinball game, let's find ways to make it act like a pinball game with Atari elements," The blend is brilliant and works very well.
4/5

If you enjoyed this Video Pinball review, you're encouraged to discuss it with the author and with other members of the site's community. If you don't already have an HonestGamers account, you can sign up for one in a snap. Thank you for reading!

© 1998-2020 HonestGamers
None of the material contained within this site may be reproduced in any conceivable fashion without permission from the author(s) of said material. This site is not sponsored or endorsed by Nintendo, Sega, Sony, Microsoft, or any other such party. Video Pinball is a registered trademark of its copyright holder. This site makes no claim to Video Pinball, its characters, screenshots, artwork, music, or any intellectual property contained within. Opinions expressed on this site do not necessarily represent the opinion of site staff or sponsors. Staff and freelance reviews are typically written based on time spent with a retail review copy or review key for the game that is provided by its publisher.