First things first. If youre looking for Silent Hill: The Remake, then youre going to be drastically disappointed. Silent Hill: Shattered Memories does involve Harry Mason looking for his daughter Cheryl, but right there the similarities between it and the first game stop. There are no cults, no Alessa, and many of the main characters have gone through drastic changes (ie. Dahlia is now a deviant hottie with a thing for Harry). Furthermore, there are no weapons, very few enemies, and the entire focus is on atmosphere, puzzle solving, and character development. Sounds odd at first, but if one considers the psychological theme of the majority of the Silent Hill games, then Shattered Memories seems the natural destination of the series. I do question whether or not Konami has gotten it right, though.

Speaking of which, the game opens with the following warning: 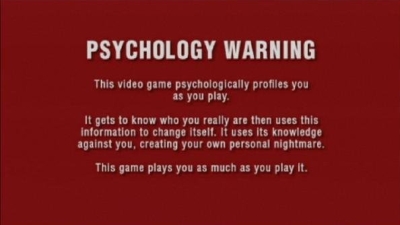 At first I scoffed at this proclamation. I mean the game plays you? Cmon, it sounds like a really shoddy anti-drug slogan. Once the game began, however, I was amazed at the subtlety with which it carried out this threat. Silent Hill: Shattered Memories is played in stages. Every stage begins with a first person psychological examination performed by a re-imagined version of Doctor Kaufmann from the original game. Kaufmann may now be a psychologist, but hes lost none of his sinister bedside manner.

Early on, the Doctor has a calming presence and acts very respectfully towards you. However, as the sessions go on, he becomes confrontational and accusatory. He wears a sadistic smile as he asks you pointed questions about who you were in high school: whether you were a slacker, or a bully, or a slut. Other questions are not always easy to answer, morally, and the Doctor smirks at you the entire time you deliberate, giving you the uncomfortable feeling that hes not really trying to help you so much as perversely getting off on your responses. One time, while answering an exam, I hesitated on whether or not Id been faithful in my relationships. When I finally answered, the Doctor took the test from me and hemmed and hawed and then... then he paused and gave me a searching look. Have you REALLY been unfaithful? he asked. The truth was, I hadnt, but I have had some harrowing relationships that made me feel obligated to say yes. I couldnt explain this to the game, so I was forced to re-evaluate my stance and answer no. The Doctor grinned at me, pleased as punch to catch me in my uncomfortable lie, and made a note on his sheet.

These sessions serve a dual purpose. On the most basic level, your responses change little details about the game: what the enemies look like, what clothing characters wear, how they interact with you, etc. On a deeper level, these sessions serve to humiliate the player, probing them in ways that will make most people uncomfortable and dropping insinuations designed to raise their temper. More than anything, it leaves a player feeling helpless, which is exactly what you want in a survival horror game.

After the evaluation is over, the player takes control of Harry Mason as he runs around various parts of Silent Hill, looking for clues to his daughters whereabouts. Sadly, the infamous town doesn't live up to the tension created in the Doctor's office. First of all, the new ice aesthetic shows an uninspired departure from the look of past titles. While a frost-riddled landscape has the potential to be bleak and unforgiving, ultimately it is one that speaks of nature and freedom and even a frigid kind of beauty. The macabre industrial wasteland of past titles was something distinctly unnatural and not in the least an attractive environment. It was dead; it was hard; it was ugly. You did not want to be there. In comparison, a Winter Wonderland just isnt so bad.

Also, there are absolutely no monsters during these sections, which makes them pretty pointless. There are plenty of creepy locales packed into Shattered Memories, including old favorites like the school and hospital but also new places such as a dilapidated amusement park and a shadowy forest. However, with the player secure in the knowledge that no bogeyman is going to leap out from the shadows, all of these places fall flat and quickly your journey through them becomes tedious. Konami tries to fill the space with puzzles, but few are going to be excited by those.

With a couple exceptions, the puzzles are centered around tasks involving manipulation, such as pulling back curtains to find a key or opening drawers to find a key or, uh, opening a box to find, um, a key. Obviously, the PSP is not equipped with the Wii's motion controls, but the simple joystick controls handle the puzzles surprisingly well. Maybe too well, in fact. Without the fun of motion control, the puzzles become quick and silly tasks that have little meaning in the grand scheme of things. Even the cellphone, which allows you to make calls to various numbers youll find throughout the game and take pictures of (harmless) ghosts only serves to elongate the tedious linearity of these stages.

Persevere, though, and youll be rewarded with a nightmare. Piercing cries echo throughout the city, the walls frost over, chunks of ice explode from the ground, and everything goes shit crazy with static. In what are easily the best sections of the game, Silent Hill finally releases its monstrous denizens on the player. As there are no weapons in Shattered Memories, Harry is left with little option except to run through a maze of frozen rooms and broken streets while pursued relentlessly by screaming horrors. These sections achieve what every other part of Shattered Memories fails at: they are actually frightening.

The game suffers here a little bit from Mirrors Edge Syndrome, where its not always clear where you have to go or how to get there. Ostensibly, the doors you can open and the ledges you can climb up to are coloured blue, but so is everything else so its easy to get lost. Early on in the game, there arent too many paths to take so youre bound to find your way eventually, but near the end these sections become merciless and frustrating, with little clue given as to how to escape the maze. Inevitably, youll hit a dead end and your pursuers will catch up and give you big deadly hugs. Shaking them off is a simple matter of hitting the button the game tells you to, but then you still have to figure out where youre going. Succeed in beating the maze and its back to the Doctors office for another round of question-and-answer.

The major failing of Shattered Memories is its predictability. The whole point of a survival horror game is to keep a player on his toes. The formula that the game establishes early on never undergoes much change or deviation, allowing the player to become too comfortable. Not having weapons or a combat system keeps the focus on atmosphere but it is a misused concept. Had the designers broken up the monotonous exploration of the environment with a few well-timed scares they couldve captured the full potential of their innovation and delivered a game that was truly unique in the genre, instead of just being a quirky diversion. Players will want to try hard to get the good ending on their first play through. Its a wonderfully twisting tale thats better written and acted than any of the previous titles, but few will want to experience its tedium a second time.
3/5

If you enjoyed this Silent Hill: Shattered Memories review, you're encouraged to discuss it with the author and with other members of the site's community. If you don't already have an HonestGamers account, you can sign up for one in a snap. Thank you for reading!

© 1998-2020 HonestGamers
None of the material contained within this site may be reproduced in any conceivable fashion without permission from the author(s) of said material. This site is not sponsored or endorsed by Nintendo, Sega, Sony, Microsoft, or any other such party. Silent Hill: Shattered Memories is a registered trademark of its copyright holder. This site makes no claim to Silent Hill: Shattered Memories, its characters, screenshots, artwork, music, or any intellectual property contained within. Opinions expressed on this site do not necessarily represent the opinion of site staff or sponsors. Staff and freelance reviews are typically written based on time spent with a retail review copy or review key for the game that is provided by its publisher.