Yes, The Colonel's Bequest has all the good things in life. It's even set in the heart of the Roaring Twenties, but unfortunately for the lovely Laura Bow there won't be any time for bootleg hooch or the devil's jazz. Our spunky flame haired sleuth instead finds herself surrounded by an ever dwindling cast of shifty suspects on Colonel Henri Dijon's crumbling bayou plantation, because nothing livens up a creepy old house quite like death. 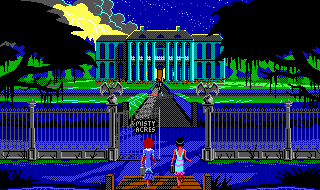 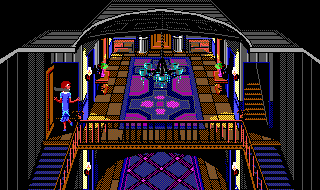 It seems the now wheelchair bound soldier's days are drawing to a close, so he's summoned the entire clan to this isolated estate in order to announce the final disposition of his vast fortune. Everyone is to receive an equal share: the booze-addled lush of a sister, the conniving lawyer, the spoiled Hollywood starlet and her sleazy playboy sibling  even sultry French maid Fifi, who apparently spends most of her time polishing the old boy's collection of fine weaponry whenever she's not buffing his trusty cannon. Naturally should anyone predecease the patriarch, his or her share will be divided equally amongst the lucky survivors, not that there's any immediate reason for concern thanks to the colonel's personal physician being right there on the premises. With all of his (unlabeled) potions and pills. He's also included in the will, of course, as is the faithful cook. So, who wants another peek at Uncle Henri's magnificent collection?

The splendor of his once proud estate may have long since fallen into ruin, but it does make for some truly atmospheric explorations thanks to gloomy EGA graphics and the hauntingly high-end Roland MT-32. Each new act brings with it the discovery of another lifeless corpse, though not necessarily in the same location on subsequent playthroughs, and they seldom shy away from explicit bloodshed or tawdry flashes of 16-color skin. The great outdoors, on the other hand, always teem with activity: upon braving the howling winds, incessant insects, and drunken dames of the sprawling marshlands, you'll be sure to notice sudden bursts of light overhead just before the deafening crash of thunder  and perhaps come to the realization that the term "old ghosts" isn't always a metaphor. There are plenty of subtler touches as well, like the shadowy figure occasionally creeping past the windows unnoticed save by a sharp-eyed snoop. 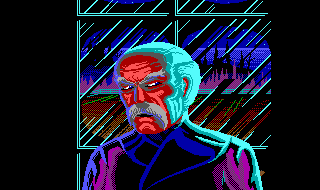 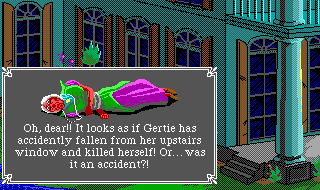 And those eyes had better be sharp, for the murder mystery aspect of The Colonel's Bequest is heavily emphasized with its unique and surprisingly complex twist on the typical graphic adventure formula. Unlike similar Sierra releases of the era, this is no mere scavenger hunt; although there are several traditional inventory-based puzzles that can be solved, the vast majority of your focus is instead devoted to closely scrutinizing Laura's surroundings in order to extract clues and suspicious details  and virtually everything in the game is optional. For example, by uncovering secret passages throughout the house you'll be able to spy on the other guests' private conversations in order to learn their sordid secrets and eventually piece together a web of treachery and deceit, but it's actually possible (if somewhat improbable) to advance the plot merely by blundering through every last delicate situation: brazenly walking in on clandestine meetings, allowing critical evidence to disappear, and ultimately surviving the night with no idea of what's really been going on other than a trail of (missing) bodies and your final score of "barely conscious."

To that end the old fashioned text parser greatly contributes to this whodunit design strategy; right clicking gives you convenient but cursory descriptions of whatever the cursor is pointing at, but in order to interact with something you'll need to know precisely what you want to do with it. It's not enough to simply "talk" to a character either; as in the later Quest for Glory series you'll need to either ask or tell someone about specific subjects. Items change location depending on the time as well as acquiring additional fingerprints, to say nothing of your equally busy fellow lodgers. Hopefully you'll have noticed who owned a certain handkerchief when it turns up somewhere it shouldn't, or which characters are known to enjoy quality smokables after finding a cigar stub in one of the hidden rooms. And if you never bothered to peer inside the study's weapons cabinet at the beginning, how are you going to know if anything's been later disturbed? The total list of available points (quietly tallied up for the mighty Sleuth-O-Meter) is truly staggering, so upon reaching one of two very different conclusions you can review hints on what you missed along the way. 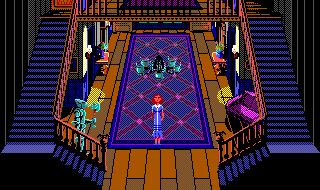 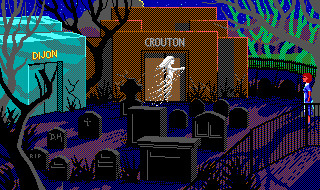 Careless and fiendish players alike, however, will also discover countless ways to reach a distinctly briefer third conclusion. Sierra titles are legendary for their undeniably cool if sometimes frustrating opportunities to encounter a gruesome end, and this one boasts many of the finest demises in adventure gaming history. Tread beneath an ominously tinkling chandelier one too many times and Laura may slowly glance up at it right before she's reduced to a heap of shattered glass and chunky bits, while unexpected shortcuts to the basement via the laundry chute end with her harp-plucking ghost drifting back towards the heavens alongside the exclamation "Oh, chute!" Horrific puns are almost as common as horrific fates, as when sneaking inside a seemingly empty elevator shaft only to be leisurely pressed into paste all over the colonel's formerly immaculate floors. "Way to go, Sherlock, you just invented the trash compactor!" Of course, such inventions aren't particularly necessary in these parts, as hungry swamp gators are only too pleased to carry off unwary adventurers for a midnight meal.

It's even possible to break that most sacred taboo of hot horror heroines; when instructed to "take shower" while in the bathroom, Laura will coyly peel off her dress and lacy underthings for a soothing, unsuspecting scrub. Oh yes, this will certainly turn out well. Shortly after the door quietly slinks open, a gleaming blade repeatedly plunges into her sinking silhouette, thick smears of crimson oozing down the filmy curtain to the shrieking strings of Psycho. You'd be similarly crazy to miss this murderous mystery; whether for fiendish fatalities or devilish deduction, The Colonel's Bequest is sure to leave a lasting mark, just like an elegant painting. 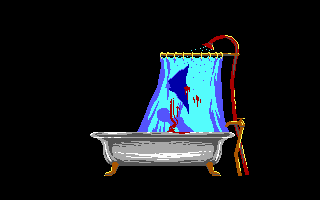 If you enjoyed this The Colonel's Bequest review, you're encouraged to discuss it with the author and with other members of the site's community. If you don't already have an HonestGamers account, you can sign up for one in a snap. Thank you for reading!

© 1998-2020 HonestGamers
None of the material contained within this site may be reproduced in any conceivable fashion without permission from the author(s) of said material. This site is not sponsored or endorsed by Nintendo, Sega, Sony, Microsoft, or any other such party. The Colonel's Bequest is a registered trademark of its copyright holder. This site makes no claim to The Colonel's Bequest, its characters, screenshots, artwork, music, or any intellectual property contained within. Opinions expressed on this site do not necessarily represent the opinion of site staff or sponsors. Staff and freelance reviews are typically written based on time spent with a retail review copy or review key for the game that is provided by its publisher.