Throughout a long and storied history ranging from the old glory days of leading the computer industry to its eventual descent into flaming ruin, the graphic adventure genre has traditionally been dominated by Sierra On-Line and LucasArts. Certainly other companies occasionally gave it a go, but none ever managed to recreate the lavish production values, legendary creativity, and all-important sales figures of the Big Two in their prime. With The Legend of Kyrandia RTS-kingpin Westwood Studios aptly demonstrate this principle in action  despite pretty graphics and outstanding music, it plays like a blueprint on how NOT to design an adventure game. 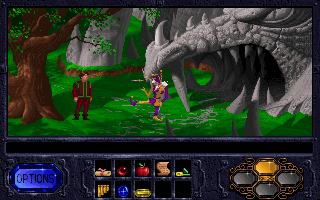 Thrust into the perpetually aching boots of stereotypical lost prince Brandon, Kyrandias generic fantasy setting can never quite decide whether its supposed to be a serious quest or humorous spoof, so it settles for a half-hearted attempt at both. Hence youll meet stock forgetful wizards and dim-witted peasants, but otherwise its all lengthy speeches about saving the land from evil or some other typical gloom and doom. The only memorable exception is antagonist Malcolm, a deranged jester sporting deadly magical powers and a twisted sense of humor thats vaguely reminiscent of everyones favorite undead blowhard, the ghost pirate LeChuck. Likewise it clearly tries to emulate the lush, painstakingly detailed visuals of a LucasArts world, but the actual puzzles are crueler than even the nastiest Sierra game.

Westwood apparently wanted to make interaction simple by employing a single-click interface instead of selecting from various icons or verbs, yet they completely miss the point by constantly forcing you to go pixel hunting and click all over each screen in search of tiny, frequently hidden items. Unfortunately the cursor wont give you any indication when its positioned over a hotspot, and some of these items arent even visible, most notably a large gemstone that can only be uncovered by clicking on an otherwise nondescript spring. Collecting a variety of different jewels is often necessary to solve certain puzzles, yet theyre aimlessly scattered all over the world  and randomly placed, making for a long and frustrating task even if you know which ones you need. For that matter, the solutions to several of these puzzles rely entirely on trial and error rather than well-placed hints. Whether crafting a potentially deadly potion or adorning a statue with exactly the correct types of gems in exactly the right order despite the ridiculous number of potential combinations, youre expected to just keep plugging away until either something works or you get tired of restoring a saved game. On top of that youre saddled with extremely limited inventory space; you can drop things anywhere you want, yet its never clear if an item is no longer needed or will be important again later  or if it ever serves any purpose at all. Considering that you cant always return to earlier areas, its all too simple to irrevocably screw yourself over by leaving something behind, or to misuse an object with no way to obtain a replacement, a familiar (and universally derided) tactic to artificially lengthen your playing time.

In order to further pad out the size of the game world, traveling from one important location to another also requires you to trudge through mazelike forests where every screen looks incredibly similar to the last. Of course thats nothing compared to the later expedition inside a cavernous labyrinth where you have to pick up glowing berries that last for exactly three screens before leaving you trapped in darkness and instant death. Not only is this the most frustrating portion of the adventure by far, but youre forced to return to this maze a second time in order to reach a previously inaccessible exit and also pick up a key. Naturally finding said key requires you to travel down a completely different route than the exit and theres never any indication that youre even meant to be looking for it, so you could easily miss the damn thing and instead find yourself hopelessly stuck at a locked gate near the end of the game.

But while Westwood seemingly lacked all but the slightest idea of how to design a successful point & click adventure, at least their efforts werent a total loss. Frank Klepacki crafted a truly fantastic score for the Roland MT-32 that ranges from somber string melodies to highly energetic, almost funky traveling marches  its therefore a shame that neither ScummVM or DOSBox can support it at present, relegating you to the still catchy but decidedly inferior AdLib music instead. And ironically enough Kyrandias immediate sequel Hand of Fate is a brilliant game that retains the excellent visuals and music while also overhauling its predecessors dreadful missteps in almost every conceivable way, including a very large and very welcome focus on humor as the cynical, slightly air-headed enchantress Zanthia. Clearly The Legend of Kyrandia was an important learning experience for the House That Dune Built, but they had a long way to go before daring to approach Sierras crown; this particular installment merits little more than a dunce cap.

If you enjoyed this The Legend of Kyrandia review, you're encouraged to discuss it with the author and with other members of the site's community. If you don't already have an HonestGamers account, you can sign up for one in a snap. Thank you for reading!

© 1998-2021 HonestGamers
None of the material contained within this site may be reproduced in any conceivable fashion without permission from the author(s) of said material. This site is not sponsored or endorsed by Nintendo, Sega, Sony, Microsoft, or any other such party. The Legend of Kyrandia is a registered trademark of its copyright holder. This site makes no claim to The Legend of Kyrandia, its characters, screenshots, artwork, music, or any intellectual property contained within. Opinions expressed on this site do not necessarily represent the opinion of site staff or sponsors. Staff and freelance reviews are typically written based on time spent with a retail review copy or review key for the game that is provided by its publisher.