Evil is afoot, and its clad in bruise-purple track bottoms and a dull grey trenchcoat with the specially-made high collars that are oft-employed by sexually-deviant flashers. More importantly, its getting away! And if a gaggle of police officers waving what are either truncheons or comically oversized foam fingers perminantly flipping the bird cant stop them, who can?

You can. Armed with only a PDA which seems to have been installed with the pre-BETA version of Windows 3.1, and your wits, Interpol ask you, the greenest PI they could find, to crack the greatest criminal ring ever known. Enter your name into your ancient PDA, and youll even see you have a nickname bestowed upon you befitting to your rank. 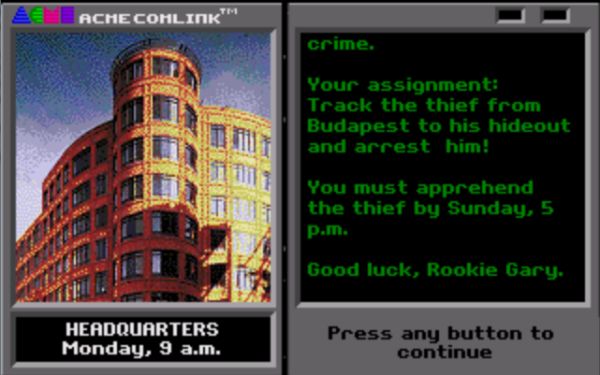 Rookie Gary was not impressed.

The organisation features an impressive cast of misfits and rogues, such as a freestyle aerobics superstar with a love for tennis, spicy foods and crazy jewellery, or a convertible-driving, world-class croquet player who always leaves a diamond-encrusted stickpin at the scenes of his crimes. No wonder Interpol needed go to ACME detective agency to try and track down such subtle masters of stealth and guile.

Rookie Gary starts to investigate a heinous crime committed in the grand settings of Budapest. Just because.

Budapest, like every location you travel to in your anti-crime rampage across the very globe, has three buildings you can visit to gather clues on your nefarious foes. Some of these locations make perfect sense: airports would be an obvious place to look for a renegade on the run, as would buildings like hotels and foreign ministries. Others include more random locales, like sports clubs and libraries.

The odd-looking receptionist at Budapests hotel tells me that our man -- who's being constantly hunted by police and green private investigators -- avoids notice by driving a big flashy limo around and asking everyone wholl listen for timetables of the Patagonian regions. The girl at the airport tells me that he was spotted carrying around a flag with a sun on it. I dont know about you lot, but when Im on the run from THE MAN, (and it happens more than you might think. Videogame journalism can get you on a lot of powerful peoples bad sides), I often prance around waving the flag of my next designated hideout for all to see.

I followed the cretin to Buenos Aires, and, sure enough, I was greeted with a peculiar sight upon entering the stock exchange (for some random reason). A man in a black mask and a stripy top appeared, but soon scampered once he saw me and my eyes blazing with the fiery light of justice. This was obviously VERY SUSPICIOUS behaviour for innocent citizens, so my deductive reasoning led me to believe I was right on the heels of a villainous villain!

The Stock Exchange guy confirmed my suspect was flashing a mammoth gold ring. Entering all I knew about my mark into the PDAs search engine, I found I was tailing none other than the legendary rapscallion SCAR GRAYNOLT! 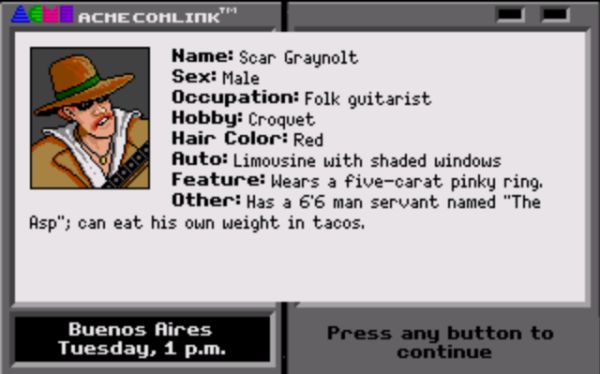 Hes an ungodly hybrid of Hitler and Beck -- he must be stopped.

My airport sources told me the plane he hopped on had an orange, white and green flag on it (yet, though they work in an international airport, they know not what this flag is), while the third informer tells me of his research into Sikh weddings. Rookie Gary flies to New Deli.

The market place lends new henchmen to show Im on the right track, as well as more clues for my fantastic mind to digest. Graynolt, taking a break from malicious harmonica playing, has been digging up the dirt on silver curios and checking out books on Aztec purification. To Mexico, then, and, sure enough, one of the four highlighted locations I can away to is none other than the least-imaginatively-named capitals in existence, Mexico City. Its like they dont even try.

Mexican museum guards tell me Scars been researching French colonial history, so I skip the rest and go right to Montreal, where I innocently enter a hotel only for some thug to hurl a knife at me. Rather than be alarmed at this blatant attempt on my life instigated by a crazed hippy with underarm hair and a giant chauffeur, the local authorities congratulate me for drawing so close to my quarry. 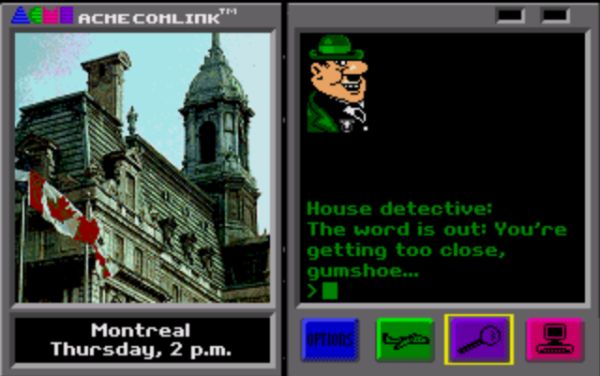 They also edge slowly away from me in case of gunfire. Though later stages suggest that, despite the thief rings apparent wealth, firearms are too expensive and they make do with throwing melee weapons such as axes in their place. So its up to me and my gaggle of uniformed police officers armed with their foam fingers of righteousness (even if they are fashioned in a suggestively naughty way) to bring Scar down. Theres brief chase, before, finally, this criminal mastermind is bought to hard justice. 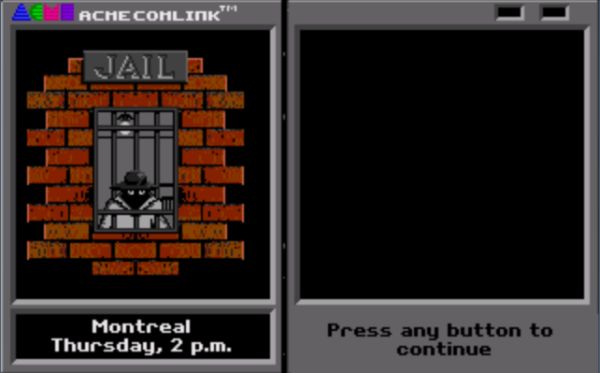 What did we learn?

We learnt that folk musicians are inherently evil and will throw daggers at you if you rate their albums any lower than 2 stars on pitchforkmedia.com, and will also tell everyone they can find little tidbits of information about where they might be headed to next, unless they drop all subtlety completely and wave a huge flag of said country right in the witnesses face. And we learnt that hurling them in a dank cell where they belong earns you the great honour of a shiny new nickname.

Rookie Gary is no more. Make way for Sleuth Gary!

Of course, theres numerous ways I could have lost the case and been stuck at my rookie level a little longer while Scar twanged his guitar tunelessly and warbled on about saving trees or hugging rabid racoons: fail to read the clues correctly and waste your limited time flying incorrectly from one wrong city to the next. Not spend enough time trying to identify your crook from witness descriptions and fail to issue a warrant for their arrest, and, even should you catch them, theyll walk free with an air of infinite smugness. Sleuth Gary had a harder time catching his man than Rookie Gary did, but, while the difficulty alters, the routine never really does. The biggest security blanket the cartel of neer-do-wells revel in is that, though it certainly fares better than most educational titles, Where in the World is Carmen Sandiego? is still a more graphic version of doing your homework, and not even the nerdiest of us enjoy that.

EmP: Hey, do you enjoy doing homework?
Wolfqueen001: Depends, I guess. Sure, sometimes!

I concede, then, that theres a market for this game and I concede, begrudging it all the way, that chasing Sandiegos goons from London to Bombay fuelled by the raging inferno that is my intellect is a gaming pleasure not often enough seen in our chosen media. Scar was doomed the very second he tried to outsmart Rookie Gary, and his cohorts soon fell victim to the same laborious sleuthing that moved the young PI quickly up the ranks until he eventually could have a crack at the big girl herself.

He never got the Overlord moniker I feel he truly deserved, but he did enough to fell a crime kingpin. All he had to do was think, deduce, and try to keep on top of the crippling recycling of the same case with different question rehashed over and over again. But, still, the worlds a better place now so long as Carmen doesnt discover Time Travel or something just as ludicrous.

Notice how theres a link? It leads to a hilarious inside joke. Im smart and funny.

If you enjoyed this Where in the World is Carmen Sandiego? review, you're encouraged to discuss it with the author and with other members of the site's community. If you don't already have an HonestGamers account, you can sign up for one in a snap. Thank you for reading!

© 1998-2021 HonestGamers
None of the material contained within this site may be reproduced in any conceivable fashion without permission from the author(s) of said material. This site is not sponsored or endorsed by Nintendo, Sega, Sony, Microsoft, or any other such party. Where in the World is Carmen Sandiego? is a registered trademark of its copyright holder. This site makes no claim to Where in the World is Carmen Sandiego?, its characters, screenshots, artwork, music, or any intellectual property contained within. Opinions expressed on this site do not necessarily represent the opinion of site staff or sponsors. Staff and freelance reviews are typically written based on time spent with a retail review copy or review key for the game that is provided by its publisher.