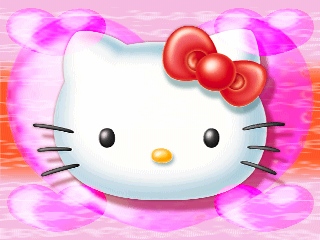 Seeing those two words together on a PlayStation case most likely caused thousands upon thousands of gamers to react in disgust when they saw it in a video game store. Afterwards, they probably tried to find the closest T or M rated game, stared at it for a few seconds, and then left the store, believing their manhood has been kept intact. It's a shame that many a gamer stayed away from this puzzle title thanks to its brand name, because Hello Kitty's Cube Frenzy is actually entertaining. It doesn't come off very innovative, however. Then again, you can say the same for the majority of puzzlers on the market, since Cube Frenzy does exactly what they do: take ideas from other puzzle games and put a twist on it. In Cube Frenzy's case, it closely resembles Tetris Plus' Puzzle Mode, where you must help guide a professor, who aimlessly walks around a small area, filled with blocks already in place, to the goal. You do this by using random, falling blocks given to you, and carefully placing them around the stage, so that the professor can walk or climb on them. To make things more difficult, there's a spiked ceiling, which slowly moves downward every few seconds.

Cube Frenzy plays quite similar, except there's some modifications to the gameplay. You're still playing in areas with pre-placed blocks, except the field is wider, and Hello Kitty takes over the professor's role of aimless wanderer. However, instead of guiding her to a goal with the help of random, falling blocks, you have to help her pick up all the items in each area... with the help of random, falling blocks. There's no spiked ceiling here to get in the way, thankfully, but that doesn't mean things are easier. At first, the items are placed in extremely easy spots, but as you progress through Story Mode, they end up being planted in areas that require you to do some thinking.

In many situations, the placements of the items forces you to restructure the play area by getting rid of specific blocks (by lining them up with three or more of the same colored blocks), and then create new structures for Hello Kitty to walk or climb on. And while the spiked ceiling is absent, there are still plenty of obstacles that will make things a bit challenging. Usually, there are three other characters wandering around the stage; they won't help you, though, they're just present to get in your way. Shoot, one of them even starts kicking blocks around every time you grab an item. This is actually dangerous, because this normally leads to a chain reaction, and if Hello Kitty is standing on the blocks while it's happening, you could unintentionally drop her down a pit.

So, despite Cube Frenzy being just a kids game, the developers made sure it was a pretty interesting one. Even then, for many gamers over a specific age, the enjoyment of this title ends up being a bit limited. I think because the developers knew they were making a game for kids, they held back on making Cube Frenzy truly challenging. I did have fun going through the puzzles, but, I rarely played through one that forced me to really think about how to complete the level. It was only until the final stage in Story Mode that I was provided with some tough situations. Thankfully, the developers were kind enough to add an extra mode, curiously titled Extra Mode, which presented me with tougher puzzles, plus some additional characters to play as once they were completed. Sadly, they didn't include many puzzles in this mode, so it ends pretty quick. Granted, you can make things interesting by changing the difficulty to Hard, which forces you to pick up the items in a specific order, but you're always left wanting more in the end. It would have been neat if they added, if it were possible, a mode where each puzzle was randomly generated, providing gamers with an endless amounts of levels to play through.

However, in the end, it's still a kids game, and it's a bit unfair to be harsh on it for being something it's suppose to be. Viewing this game from a child's point of view, I can imagine this being really fun to play through, and probably end up being a bit more challenging than from what I experienced. That is, if they haven't already moved on to games that are tougher in comparison. So, whether you are a parent looking for something for your child to play on a PlayStation or PS2, or just an open-minded gamer, I'd suggest checking out Hello Kitty's Cube Frenzy, if you can find it cheap.

If you enjoyed this Hello Kitty's Cube Frenzy review, you're encouraged to discuss it with the author and with other members of the site's community. If you don't already have an HonestGamers account, you can sign up for one in a snap. Thank you for reading!

© 1998-2021 HonestGamers
None of the material contained within this site may be reproduced in any conceivable fashion without permission from the author(s) of said material. This site is not sponsored or endorsed by Nintendo, Sega, Sony, Microsoft, or any other such party. Hello Kitty's Cube Frenzy is a registered trademark of its copyright holder. This site makes no claim to Hello Kitty's Cube Frenzy, its characters, screenshots, artwork, music, or any intellectual property contained within. Opinions expressed on this site do not necessarily represent the opinion of site staff or sponsors. Staff and freelance reviews are typically written based on time spent with a retail review copy or review key for the game that is provided by its publisher.