The most obvious is Segas dubious claim that this collection features enhanced HD graphics for ultimate involvement. What this actually means is that you can go to the menu and turn smoothing on. The clean lines will be replaced by blurred edges that make the graphics look blotchy and unclear. Smudging would be a more accurate term. 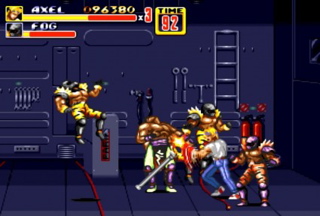 This is not the only issue. It seems that the 360 is unable to handle the Genesis Guitar, because the sound emulation (mainly of effects such as Sonics spin-dash) is far from perfect. This comes as a surprise given the faultless emulation of some of these titles over Live Arcade. What doesnt come as a surprise is the inferiority of the 360 d-pad when compared to the Mega Drives. Normally the 360 controllers most cited weakness doesnt bother me, but when youre playing 40+ Mega Drive games that rely on it exclusively, it does become a nuisance. Personally, I would rather play a compilation than download ROMs. But its hard for me to argue that Ultimate Collection is technically superior to Gens when youre getting better emulation and the precision of a keyboard (putting aside all questions of legality, of course).

The spectre of illegal emulation hangs over collections such as this, which explains why publishers make the effort to include extras such as promotional art, interviews and trivia. Ultimate Collection gathers this material into a museum section, but its bare-bones at best. Sega hasnt even bothered to replace the US box art with PAL scans. This lazy attitude spills over into the Achievements. Instead of requiring gamers to actually complete games or attempt unusual challenges, Ultimate Collection awards gamerpoints for silly tasks like eating two hundred fish in Ecco the Dolphin.

In fact, the only thing that Ultimate Collection does with any real success is feature a large number of Mega Drive games. This may strike you as slightly disingenuous, especially if youve studied the list of included titles and spotted a notable omission. I was disappointed by the absence of Revenge of Shinobi, but then I thought about it and realised that compilations are never going to satisfy everyone because they can only ever provide a snapshot of an era.

I read a review that moaned about the omission of Earthworm Jim from Ultimate Collection. The reviewer overlooked the fact that the game was developed by Shiny and published by Virgin. His experience of owning a Mega Drive is so associated with Earthworm Jim that any retrospective collection which omits it is always going to feel incomplete to him. We can all think of titles that define our own personal experience of owning a Mega Drive and are absent from this collection: Revenge of Shinobi, Gunstar Heroes, Castle of Illusion Even if this collection had a hundred Sega games from the 2D era there would still be one person disappointed that Wardner didnt squeeze its way onto the disc.

So forget what isnt here and concentrate on what is! Ultimate Collection is comprehensive enough to include, in full, all the major Sega franchises from the 16-bit period. RPG titans Phantasy Star and Shining Force are present, as are brawlers Golden Axe and Streets of Rage. Sonic the Hedgehog makes its umpteenth appearance on a Sega collection, but this wouldnt be a Sega collection without the presence of its iconic platformer. Alongside these heavy-weights is a selection of games that reflect Segas impressive output during the early 90s. Ristar, Alien Storm, Shinobi III, Comix Zone, Vectorman, Kid Chameleon, and so on. There are even a few titles that that have never made it onto a Sega compilation before, such as The Story of Thor (Beyond Oasis), Fatal Labyrinth and Dynamite Headdy.

Given the diverse and plentiful selection of classic Sega games from the 16-bit era, you may be slightly shocked to learn that most of my time has been spent playing Alien Storm. Sega Sonic fans may remember Alien Storm as a BAD side-scrolling brawler, but once you get over this small issue its actually quite fun! 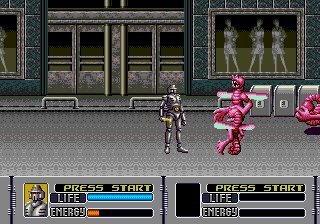 Maybe its best if you take my word for it.

Despite its obvious deficiencies, Alien Storm is played at a frenetic pace. Most of the action games on this disc are actually quite sluggish. For all the abilities of Joe Musashi, even Shinobi III can be a little slow at times. His running melee attack must be very carefully timed if you actually want it to connect with an enemy. In contrast, Alien Storm feels like a hyperactive version of Golden Axe. This is due to the dexterity of Scooter, the silver robot protagonist. He attacks the gruesome alien invaders with an electric whip and shoulder cannon. Watching him lash out at alien blobs and green monsters is actually quite a sight, as he combines whip and cannon in a flurry of explosive activity. Scooter is able to dart about the screen like a bolt of lightning as he/she/it evades the alien hordes, but even his bog-standard walk is best described as an urgent shuffle, rather than the languid stroll of his brawler peers.

Maybe Ive been spoilt by a diet of modern action games that do everything at such a hurried, unremitting pace. Or maybe, just maybe, the merit of compilations such as this lies in the second chance they give to titles that were missed, avoided or rejected for other, better adventures. Back in the distant days of 1993 I never gave Alien Storm a chance because I had Streets of Rage 2. Ive only played Streets once since I bought Ultimate Collection. Im glad its on this disc because I feel a sense of nostalgic affection for it and its still a very good brawler. But these days Id much rather rediscover a long forgotten title like Alien Storm because it still has the potential to surprise me.

Compilations are a valuable source of nostalgia, but instead of moaning about exclusions we should relish the chance to fill gaps in our experience of a specific period. I can complete every Sonic game with my eyes closed, but Ive never owned a single Golden Axe game. Ultimate Collection gathers them all together, even the third title in the series. I recognise the graphical style and gameplay mechanics because theyre so iconic, but the experience feels fresh and therefore more engaging than rushing through the Green Hill Zone for the millionth time. This sense of discovery is made easier by the depth of games assembled for Ultimate Collection. The collection is so comprehensive that there are bound to be titles that youve previously missed or ignored. I even saw Altered Beast in a new light after playing the vastly superior arcade original (an unlockable extra). I wose fwom my gwave and was stunned by how good it was!

An objective verdict would stress the technical flaws and shallow extras of this compilation. However, such a judgement only tells half of the story, because the depth of this collection overshadows these mostly superficial complaints. Has any compilation featured this many games before? I owe Sega Mega Drive Ultimate Collection gratitude for exposing me to 16-bit games that I was unfamiliar with or had long ago rejected. Theres every chance that youll play Alien Storm and dismiss it as a pale imitation of Golden Axe, but maybe youll rediscover Phantasy Star IV, or Gain Ground, or Shinobi III. You would be foolish not to accept this second chance.

If you enjoyed this Sonic's Ultimate Genesis Collection review, you're encouraged to discuss it with the author and with other members of the site's community. If you don't already have an HonestGamers account, you can sign up for one in a snap. Thank you for reading!

© 1998-2021 HonestGamers
None of the material contained within this site may be reproduced in any conceivable fashion without permission from the author(s) of said material. This site is not sponsored or endorsed by Nintendo, Sega, Sony, Microsoft, or any other such party. Sonic's Ultimate Genesis Collection is a registered trademark of its copyright holder. This site makes no claim to Sonic's Ultimate Genesis Collection, its characters, screenshots, artwork, music, or any intellectual property contained within. Opinions expressed on this site do not necessarily represent the opinion of site staff or sponsors. Staff and freelance reviews are typically written based on time spent with a retail review copy or review key for the game that is provided by its publisher.