Even after regaining consciousness your mind seems hopelessly lost in an inky void, like thick molasses drowned in a bitter cup of black coffee and poured all over a lonely asphalt street on a moonless night. The merciless glare of lights overhead sting your protesting eyes like a swarm of angry, switchblade-winged hornets when it begins to dawn that youve woken up in a seedy bars even seedier toilet stall  and you have no idea how you got here, why youre covered in dried blood, or even who you are. But this is no time for ridiculously cheesy monologues  theres a body upstairs suffering from a serious case of lead poisoning and Chicagos finest are already out for your head, assuming whats left of your brain doesnt do itself in first.


"SOCKO!"
The original ICOM MacVenture, Deja Vu was revolutionary for its unique interface when first released in 1985, but the sharp puzzles and even sharper writing are what make it well worth investigating even today. In classic noir tradition, youre thrust into the role of a hardboiled private dick whos got severe amnesia, a mean right hook, and three slugs from his .38 lodged in some poor bastards spine. Lest you share a similar fate in the immediate future, youll have to piece together not only a scattered trail of clues leading to your own identity but uncover who wants you in the electric chair on a murder rap, all while avoiding John Law, the Mob, and maybe even a hungry sewer gator or two.

Its first-person perspective is unusual enough for an adventure game, but by patterning their interface after the Macintoshs operating system, ICOM ended up releasing the first true point & click adventure in history. Not only does picking up an object simply require you to click and drag it right into the inventory window, but it can also be placed within other items like your coat pockets to increase carrying space. You can even drop them anywhere you want as long as you can remember the new location of something that turns out to be important later, so lets hope you arent the sort of person who loses his keys five minutes after putting them down somewhere. Perhaps most importantly of all, you have to interact directly with the playing screen via a menu of verbs rather than by typing everything out, a feature which obviously inspired LucasArts when they popularized the concept years later with their own SCUMM engine. 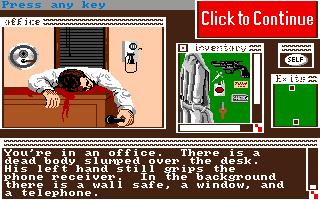 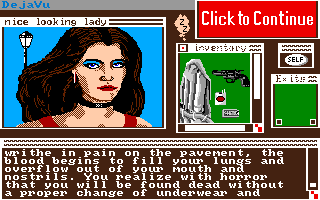 This might not mean a whole lot to you damn kids other than making Deja Vu way more intuitive to pick up and play than its decades-old release date would suggest, but the gritty appeal of crime-ridden Chicago circa 1941 is simply timeless. One minute youre wading through the sewers fending off those pesky alligators while in search of an illicit casino, the next youre standing in a lush penthouse wishing you could shoot the bastard who owns it  provided some other bastard hadnt already done it for you, of course. It quickly becomes apparent that virtually everyones out to get you, most notably the pistol-packing mugger who randomly pops up to demand all your money, but usually ends up getting a series of pops to the face courtesy of your manly fist unless you press your luck too often. Cough up a handout to the local wino and hell spin you a scoop about a professional hitman thats supposedly lurking in your office, and watch out for the cheap hooker whos got a little something in her purse for you. Shell let you have it all right, leaving you to slowly expire in a pool of blood with the horrified realization that youll be found without a clean pair of underwear.

Like the subsequent ICOM adventures Uninvited and Shadowgate, the Amiga serves up the best visuals and sound effects by far: the Mac was strictly greyscale back then and the DOS port could only manage 4-color CGA, which is just painful to look at unless you think people should have blue skin. As for the NES conversion, its just painful in general. But unlike these later offerings, actually playing Deja Vu is pretty sweet in any form; the real-world setting means all the puzzles are built around discrete logic and lateral thinking rather than casting cryptic spells or besting supernatural monsters with even more clandestine objects. Your primary challenge is instead to unearth the next lead as it slowly reveals a sordid tale of greed, sex, and murder  be it a sinister-looking bill for various pharmaceuticals carelessly tucked away in a desk drawer or a rather hefty woman bound and gagged in someones trunk  but also to sort the legitimate evidence needed to exonerate you from planted fabrications that need to conveniently disappear from the face of the earth. 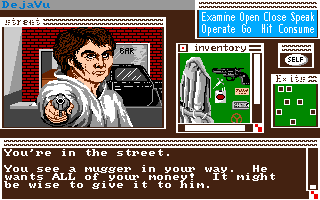 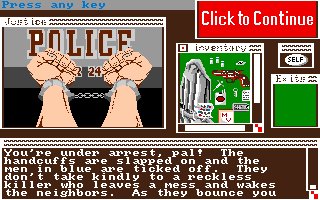 Dont let that fool you into thinking this game is easy, though  in true old-school fashion, there are all sorts of ways to screw up royally, often with little or no warning. The most notorious of these has to be the construction site located right after the police station; simply entering this screen results in your instant and unavoidable demise at the bottom of an open shaft, which is so blatantly unfair it was even joked about in the sequel. Youre also in some serious trouble should you find yourself cornered by a now seriously pissed off mugger without any cash handy, and the game is only too happy to let you destroy critical items before theyve served their purpose. Its absolutely necessary to save often and in multiple slots, because the mere act of starting up a seemingly innocuous car can lead to an early (and explosive) finale to this fishy frame job.

There are also a truly staggering number of items you can pick up  many of which are ultimately red herrings  so managing your inventory can quickly become pretty unwieldy, especially since many of them are really tiny things like coins, keys, and vials. This is where the ability to cram objects in your coat and at least keep them separated in multiple windows really comes in handy. And while you can always backtrack to previous locations in search of something you missed the first time around, there are multiple time limits to contend with as well. Right off the bat, the deserted street where you start out doesnt stay quiet for very long as police sirens continue to grow ever closer until the boys in blue automatically grab you for failing to take a hint (and a cab) within a reasonable amount of turns. Your amnesia also slowly worsens over time, with numerous warnings of your degenerating mental state until you either locate a cure or finally become a vegetable locked in Bellevue for the rest of your days.

But while it might occasionally drive you crazy, the unique strengths of Deja Vu are a perfect fit for the experienced adventure gamer, particularly when compared to its far more frustrating contemporaries. You may have found yourself trapped in a nightmare come true, but cracking this case feels more like a dream  even if it does lead to more than a few sleepless nights.

If you enjoyed this Deja Vu: A Nightmare Comes True review, you're encouraged to discuss it with the author and with other members of the site's community. If you don't already have an HonestGamers account, you can sign up for one in a snap. Thank you for reading!

© 1998-2021 HonestGamers
None of the material contained within this site may be reproduced in any conceivable fashion without permission from the author(s) of said material. This site is not sponsored or endorsed by Nintendo, Sega, Sony, Microsoft, or any other such party. Deja Vu: A Nightmare Comes True is a registered trademark of its copyright holder. This site makes no claim to Deja Vu: A Nightmare Comes True, its characters, screenshots, artwork, music, or any intellectual property contained within. Opinions expressed on this site do not necessarily represent the opinion of site staff or sponsors. Staff and freelance reviews are typically written based on time spent with a retail review copy or review key for the game that is provided by its publisher.