BattleMech (n): An armored combat vehicle about thirty to forty feet tall of vaguely humanoid shape, typically massing from twenty to one hundred tons. Powered by fusion reactors, 'Mechs are best suited for ground combat, although they are also capable of underwater operation as well as operation in vacuum and/or zero-g environments. A 'Mech's only true equal is another 'Mech - artillery, aircraft, and tanks are disadvantaged against them without BattleMech support or a strong advantage in numbers.

Usually when people think of giant fighting robots they think of Gundam Wing, Macross, Transformers, or Armored Core. They might think Neon Genesis, but if they do they haven't seen enough to know those aren't...

Sorry, got a little sidetracked there.

It's a genre defined by stylized and often unfeasible mechanical contraptions able to inflict colossal destruction for little to no reason other than their status as giant humanoid robots. Sometimes they might have some kind of fancy alien technology behind them, but that's a pretty big cop-out. But even Realism Nazis like me are willing to let such things slide in the context of a video game, s'long as it's fun, which is why I'm able to denounce such depictions of war machines after playing Armored Core until 3 AM last night and still maintain my journalistic integrity.

But where, you might ask, is this going with reference to MechWarrior 4: Vengeance?

The Battletech universe is an entirely different approach to the mecha genre, defined by hulking BattleMechs that actually look functional, gritty, and without all the chrome surfaces and smooth curves of other giant fighting robots. Let's look at some examples:

This is a typical Gundam: 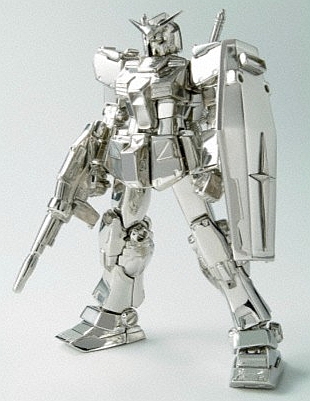 By comparison, this is a typical BattleMech: 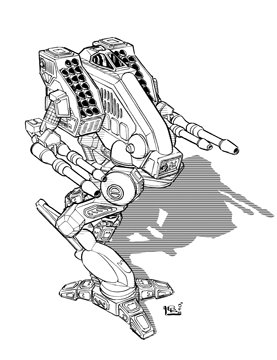 The first looks like something out of a cartoon (probably because it is). The second is probably closer to what real-world engineers might come up with if they had to design a giant fighting robot. Note among other things the lack of articulated hands.

This is the appeal of the BattleTech setting; it's much gritter and less frilly than other mecha; these aren't "mobile suits" we're talking about, these are literally walking tanks, formidable not by virtue of being mecha but by virtue of being huge artillery emplacements on legs. So with that little trip to the land of Background Information concluded, let's talk about the final entry in the MechWarrior series.

The opening cinematic treats us to some of that green-screen acting that was so popular during the late 90s, in a time when 3D rendering wasn't good enough to recreate a human likeness and studios couldn't afford real actors. The campaign mode casts the player as a Mechwarrior named Ian Dresari, member of one of the Inner Sphere's noble houses. His father rules a world called Kentares IV, at least until the Steiner family stage a coup and usurp the Dresaris, killing Ian's family in the process. Luckily Ian is offworld on campaign at the time, and when news reaches him he assembles what's left of the Dresari's private army and wages a guerrilla campaign against the Steiner occupation. It's a standard Revenge arc, complete with a backstabbing cousin, a seasoned Mech mechanic who served under Ian's father, and the elder Dresari sister further up the line of succession than Ian himself - an important fact that comes into play late in the game.

You begin the campaign with the 'Mech equivalent of your first car - sturdy, reliable (and cheaper than a bad date), but woefully underpowered and not much to look at. As you progress through missions, your detachment of mechanics salvage the wreckage of Steiner 'Mechs destroyed at the hands of your men, steadily adding a supply of weapons and chassis to your arsenal. If you're really good, the first of the truly heavy-duty 'Mechs, an Assault-class beast aptly named the Mauler, can be snagged as early as a third of the way through. Between missions, your 'Mech's weapons loadout can be modified and tweaked as you see fit; swap some armor for a heat sink, strip out the night-vision gear, add a pulse laser or two to the torso hardpoints with but a few mouse clicks. The interface is intuitive and efficient, allowing you to completely overhaul your entire 'Mech in less than a minute.

Weapons in MechWarrior 4 come in three flavors; Missiles and Ballistics are straightforward enough, and the Energy family covers a range of beams, pulse lasers, and heavy-hitting plasma cannons. Nearly every weapon has a high-tech Clan version; typically lighter and/or more damaging than its Inner Sphere counterpart, but generates more heat when fired. Each class of weapon can only be equipped to the corresponding hardpoint, and some 'Mechs may lack one or more class altogether. Conversely, some "Omnimechs" have universal hardpoints that are compatible with all three.

But Mechwarrior 4 is not just about equipping the biggest gun to the biggest mech, there's a great deal more strategy than you might expect at first glance. The skilled played must balance firepower, mobility, armor, and heat, and even then it's easy to build a 'Mech that just sucks. Luckily every 'Mech has a default weapons loadout, straight out of the rulebooks for the tabletop wargame. Default loadouts are quick and do the job, but aren't as good as some custom builds. Similarly, there's more to a mission than charging in guns blazing. At your direct command are up to three AI "lancemates", their 'Mechs and equipment customized by you prior to the mission. Their default behavior is to follow your lead and shoot anything that moves, but a cunning Mechwarrior can issue more detailed commands through the Function keys (that's F1 through F12 for the non-tech-savvy) even in the heat of battle - and while admittedly "Attack my target", "Defend me", and "Hold position" are fairly standard fare for wingmen orders, your computational comrades have enough smarts to get the job done quickly and neatly.

Your campaign to restore the Dresari line will throw you into battle in a wide variety of environments, from sun-scorched deserts to half-frozen polar regions, lush rainforests to dank swamplands, from Kentares' barren and airless moon to the towering skyscrapers of her cities. Each environment has a direct effect on 'Mech functionality; Swamps limit mobility, but do little to deter a 'Mech with jumpjets, while dense urban areas render jumpjets and long-range weapons useless. Fighting in vacuum or tundra means better weapon cooling, whereas fighting in a desert means the opposite - a fact that can be used to your advantage by donning your 'Mechs in anti-ballistic armor plating, thus forcing your opponents to abandon their projectile guns (which have very little heat when fired) in favor of energy weapons (which heat up like teenage girls in the presence of Johnny Depp). If cleverly played, your enemies' new all-laser diet will push their already sweating 'Mechs past their limits and force them to shut down before they go critical - and while they're sitting there helplessly, you and your lancemates are free to finish them off for good.

'Mechs dominate the battlefields of the 31st century, and sitting atop them in first-person cockpit view, surveying your surroundings amidst the rhythmic pounding of mechanical feet really captures that feeling of awe. With so much depth, strategy and tactical options at your disposal, MechWarrior 4 is less of "mech game" and more of a "mech simulator", but unlike a lot of other simulation games MechWarrior 4 still manages to deliver a hell of a good time without swamping the player in pages and pages of keyboard commands and numerical stats. It's pretty darned close to that mystical balance between "game" and "sim", with enough "game" to keep the casual player interested and enough "sim" to capture the mech enthusiast (read: huge nerd like me).

If you enjoyed this MechWarrior 4: Vengeance review, you're encouraged to discuss it with the author and with other members of the site's community. If you don't already have an HonestGamers account, you can sign up for one in a snap. Thank you for reading!

© 1998-2021 HonestGamers
None of the material contained within this site may be reproduced in any conceivable fashion without permission from the author(s) of said material. This site is not sponsored or endorsed by Nintendo, Sega, Sony, Microsoft, or any other such party. MechWarrior 4: Vengeance is a registered trademark of its copyright holder. This site makes no claim to MechWarrior 4: Vengeance, its characters, screenshots, artwork, music, or any intellectual property contained within. Opinions expressed on this site do not necessarily represent the opinion of site staff or sponsors. Staff and freelance reviews are typically written based on time spent with a retail review copy or review key for the game that is provided by its publisher.