The Earth is in grave danger, and we can thank two stupid astronauts because of that. As they walk on the moon, they stumble upon what they thought was a dumpster. Yeah. They decide to open up the "dumpster", and by doing so, release Rita Repulsa and her minions from their prison. What do these brave, courageous astronauts do next? Run away. Thanks. Zordon, a giant head in a container (basically), senses what has happened and orders his talking robot, Alpha 5, to gather a team of teenagers with attitudes. With these kidnapped teens, Zordon uses them to fight the evil forces of Rita Repulsa. How, exactly? Well, with the Power Coins that Zordon has given them, they can morph into: 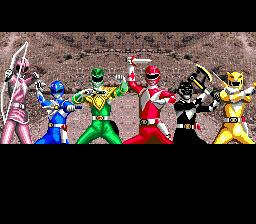 Nice, right? And with this fighting game, you too can be a Power Ranger and save the day! Begin by picking one of the five Rangers, red, black, blue, pink, and yellow, and stop the vicious, beastly Minotaur from wreaking havoc at a... parking garage? You can put a stop to its evil... plan by using your wide assortment of attacks on it, like punching him with the A button and kicking with the B button. Then, well, that's... that's all the buttons you can use. But fret not, Ranger lovers, you can perform special moves! Huzzah! If you're the Red Ranger, you can start by using his sword attack, then quickly use the Crack Shot, erm, I mean, flip kick attack. Finally, you can finish by using the incredible... um, that's it as well.

But that's just fine, since most of the Power Ranger's special moves are pretty cheap, giving you a quick victory against the Minotaur. Like the Black Ranger's spinning axe attack, which you can just keep using repeatedly, because it never stops unless you stop hitting the A button. The same goes for the Yellow Ranger's spinning thrust move, which resembles M. Bison's Psycho Crusher attack. However, don't think the fight with the Minotaur is over with the use of your cheapness. You'll have to defeat this foe once more, as a giant, at, for some reason, some wildlife setting. But this time around, you won't be controlling a Ranger. Instead, you'll be using the might of: 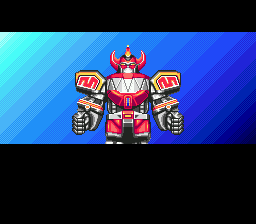 Cool, huh? Kinda. The fight is more or less the same than when you were using one of the Rangers: you kick, punch, and use two special attacks over and over again (there's a third, but it's almost useless). And that's pretty much what the whole one player scenario mode is like: fight a monster at parking garage using limited moves, fight same monster again using the Megazord with limited moves, and then back to the garage to fight another. It's not as horrifically repetitive as it sounds, since your opponents put up quite a fight sometimes. The title even continues the fine tradition in fighting games of forcing you to fight a really cheap, final boss for all your hard work.

Still, the game is pretty limited, even in the two player battle mode where you get to pick one of the monsters. Adding a few more moves for each fighter, as well as including more varied characters (6 Power Rangers isn't really variety), would have made this game a bit better. Not by much, but it would have been an improvement. Try out the SNES version if you want a nice Power Rangers fighting game.

If you enjoyed this Mighty Morphin Power Rangers review, you're encouraged to discuss it with the author and with other members of the site's community. If you don't already have an HonestGamers account, you can sign up for one in a snap. Thank you for reading!

© 1998-2021 HonestGamers
None of the material contained within this site may be reproduced in any conceivable fashion without permission from the author(s) of said material. This site is not sponsored or endorsed by Nintendo, Sega, Sony, Microsoft, or any other such party. Mighty Morphin Power Rangers is a registered trademark of its copyright holder. This site makes no claim to Mighty Morphin Power Rangers, its characters, screenshots, artwork, music, or any intellectual property contained within. Opinions expressed on this site do not necessarily represent the opinion of site staff or sponsors. Staff and freelance reviews are typically written based on time spent with a retail review copy or review key for the game that is provided by its publisher.