IVE GOT YOU
You gradually regain consciousness at the wheel of what used to be your car, the thick smell of gasoline piercing your thoughts along with the vague memory of swerving to avoid a shadowy figure that suddenly appeared in the road. Well theres no trace of it now, or of your kid brother either; he must have headed for that old mansion just up ahead in search of help. Unfortunately your day is about to become a whole lot worse  you might be Uninvited, but the longtime residents lurking inside cant wait to have you for dinner.

In this second installment of ICOMs famous series of 1st-person point & click MacVentures, youre once again thrust into a role straight from classic movies  but instead of a hard-boiled private eye or gallant knight youre just some average joe trapped in a haunted house along with all the tortured spirits of its previous guests. Just like the earlier Deja Vu, the outstanding Macintosh-inspired, menu-based interface lets you interact directly with the playing window instead of typing in commands; to take an item, for instance, you simply click and drag it right into your inventory. Basically it controls just like your computers GUI  that hardly seems unusual today, but it was a revolutionary concept at a time when neither LucasArts SCUMM engine or Windows itself had even been conceived yet. 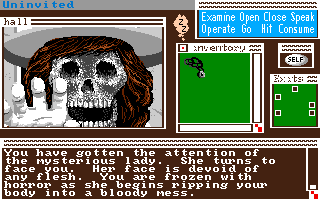 And its also just like their other games in that you can expect a seemingly endless parade of gruesome, rather graphically described ways to expire at every turn, but the horror theme featured in this one really kicks things up a notch. It isnt more than a few minutes into your explorations that a lovely belle dressed like Scarlet OHara materializes out of nowhere with her back to you; attract this mysterious ladys attention and the last thing youll see is her bleached-white skull before she starts ripping your anatomy into bloody chunks.

The packs of rotting zombies encountered later on would far prefer to simply grab an arm or two and enjoy a nice salty beverage as your veins pump straight through their cracked, yellow teeth. Even the house itself is out to get you; enter a sinister but seemingly empty cell in the tower and the door slams shut behind you, greatly improving the décor as your corpse slowly decays into ooze over the next few years. But why even wait  mess around with that axe in your own inventory and youll inadvertently cleave through the old brainpan. Oh, the embarrassment. But even if youll be seeing it constantly, at least its pretty awesome every time the screen cuts to the bloody skull of Death, whose digitized voice booms IVE GOT YOU! 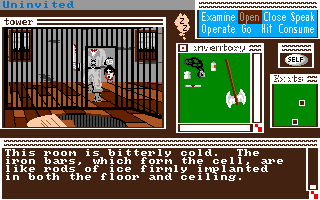 Not only are the visuals still impressive in a timeless sort of way, like a zombies clear blue eye still dangling from its socket, but Uninvited also continues the series equally terrific writing, often with considerable doses of snarky humor. Upon discovering a secret trapdoor beneath the chapels altar, youll be repeatedly advised not to use it via a different coy warning about the gigantic spider down there each time you try. Continue to ignore them and the game will finally acquiesce, resulting in your much more personal discovery of two venomous fangs along with the statement Well, now you know. There really is a spider to beware of! As for your friend the zombie, This hungry creature could not get into a fancy French restaurant. It isnt wearing a tie. Even stopping to check out window dressing like the chapels pews can be rewarding: This is where the congregation used to sit. You wonder when was the last time anyone worshipped from these pews. You wonder what they worshipped. You wonder why you are wondering about such things.

But as numerous as the deaths are, they have nothing on one of ICOMs other hallmarks: the absolutely insane number of items that you can pick up. Unfortunately very few of them are actually ever used for anything and you have a fairly limited carrying capacity. Of course this massive trove of red herrings are an intentional part of the challenge: you can easily drop inventory items anywhere you want and theyll continue to remain there  but you may have to remember where the hell you left something that turned out to be important later on, especially since some of them need to be used multiple times. This quickly becomes significant because Uninvited, much like its successor Shadowgate, is considerably harder than the Deja Vu games; its puzzles revolve around cryptic spells and other supernatural devices instead of real-world logic. There are scrolls littered throughout the house to offer clues as well as provide some insight into the mansions troubled history, but otherwise very few of the solutions would make much sense without a considerable amount of trial and error. Even then youre bound to reach moments that simply drive you up a (slimy, cobwebbed) wall. The same key obtained near the beginning ends up unlocking multiple doors throughout the game, something likely to trip up even veteran adventurers (hope you remember where you dumped it), and theres a short labyrinth that you have to navigate in and out of as well. Oh, and you have a very strict time limit to deal with as the more malevolent spirits of the house gradually burrow into your mind in order to make you join them. How strict? Dont be surprised if you have to start over again more than once on the first playthrough; even if youve already beaten it before youll probably find yourself only a few turns away from gibbering insanity by the games final moments. That is to say, your character. But seriously, the ICOM series are definitely graphic adventures of the old school, which is to say, maddeningly difficult.

While it wasnt the first, experiencing Uninvited in full color on the Amiga is definitely your best option: the Macintosh original is completely black & white while the PC port for DOS was saddled with wretched four-color CGA. As you can see, the PC also received a much later port for Windows 3.1 with completely different visuals  call me Mr. Perfectionist but I think theyre butt ugly. Half the time the graphics dont even match the text! And of course theres also the NES version.

No, if you want the best graphics in addition to bloodcurdling screams and angry crashes of thunder, the Amiga is definitely the one to go with. And if youre an experienced (patient) adventure gamer who doesnt mind the constant threat of doom (actively seeks out all the gory ways you can off yourself in each room), the creepy atmosphere and black humor of Uninvited is sure to get you.

If you enjoyed this Uninvited review, you're encouraged to discuss it with the author and with other members of the site's community. If you don't already have an HonestGamers account, you can sign up for one in a snap. Thank you for reading!

© 1998-2021 HonestGamers
None of the material contained within this site may be reproduced in any conceivable fashion without permission from the author(s) of said material. This site is not sponsored or endorsed by Nintendo, Sega, Sony, Microsoft, or any other such party. Uninvited is a registered trademark of its copyright holder. This site makes no claim to Uninvited, its characters, screenshots, artwork, music, or any intellectual property contained within. Opinions expressed on this site do not necessarily represent the opinion of site staff or sponsors. Staff and freelance reviews are typically written based on time spent with a retail review copy or review key for the game that is provided by its publisher.