Today Id like to interrupt our hard-hitting coverage of snooker, cricket, and competitive drinking (also known as darts) in order to bring you one of Europes other favorite pastimes: Teenage Queen is a strip poker game, and hence it may be almost redundant to call it a lousy strip poker game. 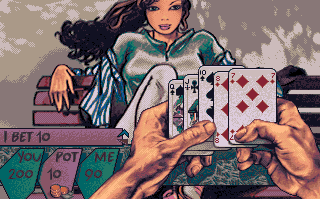 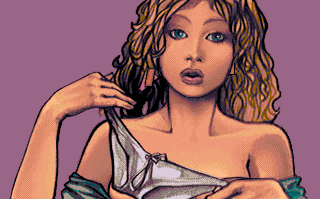 But where most of these programs reward you with digitized photos of famous hussies, hilariously awful 8-bit graphics, or  as in the case of the Commodore 64  both at the same time, this one features professional quality artwork. I mean it almost looks too competent for what its being displayed in; apparently it was produced by some respectable French artist whose talents were subsequently wasted on strip poker. This is because all people from the UK and especially France are (not so) secretly a bunch of crazed sex maniacs. But I digress.

In any case, Teenage Queen appears to be fairly well known amongst retronerds as its apparently the best looking hand-drawn strip poker game of all time, for whatever thats worth. Ironically this genre was never even that popular on the Amiga compared to other computer platforms, presumably because Amiga owners had so many real games they could be playing instead. The actual mechanics are unsurprisingly lame: your AI opponent usually folds if you place a large wager and its money has a tendency to mysteriously regenerate. Lose a hand and youll be knocked back to the previous picture, which can quickly leave you right where you started.

Most of these pictures are merely suggestive even if there are a few naughty nudes at the end, and theyre always accompanied by ridiculous French moans for each new reveal. But the real reason I even bothered with this review is because of the very last shot, in which that nubile nymph is shown tearing apart her own flesh to reveal the gleaming steel chassis of a sexy droid complete with hand razors and the demonic Exxos logo. 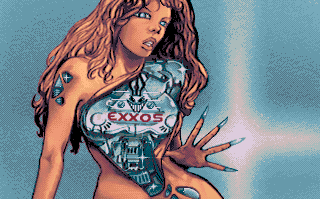 If you enjoyed this Teenage Queen review, you're encouraged to discuss it with the author and with other members of the site's community. If you don't already have an HonestGamers account, you can sign up for one in a snap. Thank you for reading!

© 1998-2021 HonestGamers
None of the material contained within this site may be reproduced in any conceivable fashion without permission from the author(s) of said material. This site is not sponsored or endorsed by Nintendo, Sega, Sony, Microsoft, or any other such party. Teenage Queen is a registered trademark of its copyright holder. This site makes no claim to Teenage Queen, its characters, screenshots, artwork, music, or any intellectual property contained within. Opinions expressed on this site do not necessarily represent the opinion of site staff or sponsors. Staff and freelance reviews are typically written based on time spent with a retail review copy or review key for the game that is provided by its publisher.