Despite also being the last, the arcade version of BattleToads is definitely the best entry in the series, and in a total coincidence marks a radical departure from all the other games. Rare finally dumped the frustrating platforming and those damned vehicles in order to concentrate on whats always been their strongest element: the brawling.

Thats right: no more climbing up (and constantly falling down) a mountain made of slithering reptiles, no being hounded through mazes by some giant orb thing, and absolutely NO slamming into diabolically placed barriers while blazing down a narrow tunnel  just kicking the crap out of anthropomorphic assholes. Up to three people can play simultaneously thanks to the extra wide resolution, and each of the Toads looks and controls a bit differently following the standard beat em up archetypes of speed, balance, and power. 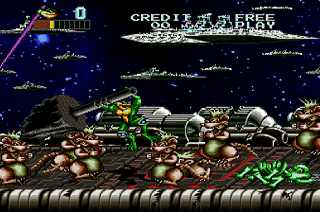 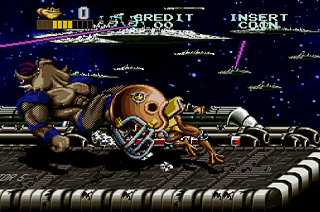 But even compared to other arcade beat em ups this one has some pretty boss graphics  charge towards an enemy with Pimple and his entire head becomes an oversized football helmet while he bellows TOUCHDOWN! Giant crates full of explosives are always lying around just waiting to be heaved into a pack of goons or you can grab a hefty pipe with a huge chunk of concrete still attached to it and start squashing them into crumpled piles of bones. But while your basic rodent footsoldier will start projectile vomiting after only a few well placed blows, things wont be so easy when youre being ganged up on by bloated porcine tuskers who take swings at you with electrified maces. Rare was obviously in love with scaling effects when they designed this  knock one of those giant pigs off his rather expansive feet and you can boot him right through the screen, the poor bastard squealing painfully the whole way down. Man, its just like youre playing an SNES game! 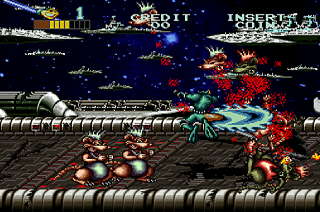 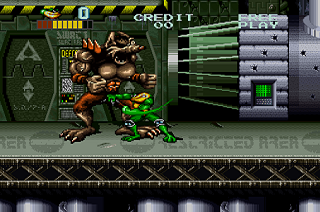 This could never have been a Nintendo game, because not only are the visuals a huge leap forward, theyre ridiculously violent as well! Whether its your leg suddenly transforming into a buzzing chainsaw right at the end of a jump kick to send some unlucky rats heads soaring through the air, or straddling a fallen foe in order to ram your mighty fist right through his cranium, its an incredibly common occurrence for fountains of blood to start raining down all over the screen. My favorite moment, however, is when youre confronted by a bulked-up behemoth thats twice your size  youll firmly grab his ballsack complete with an audible crunch (not to mention a pained grimace) and start a pounding on the old family jewels. And of course theres also watching yourself get impaled through the jaws of toad-eating snakes, a cyborg whose gore-drenched brains explode, and even a bit of constipation, but its pretty hard to top all that nutcracking.

Like all the other incarnations of BattleToads this ones tough as nails covered in broken glass, in this case taking the form of an obstinate quarter-muncher. But while you may find yourself constantly surrounded by hordes of enemies who want nothing more than to tear you into little green pieces, at least this time you can continue right where you last met a grisly demise instead of those checkpoints spawned in the bowels of Hell. The stages might appear familiar to fans/sufferers of the earlier games at first glance, like a Christmas level where youll have to avoid the icy balls of sinister snowmen, being crushed beneath a hail of icky elves, and the charges of radioactive reindeer  the difference is that youll be having fun introducing them to your spike-growing knuckles instead of trying to make a jump where the slightest miscalculation spells instant death. The last level is the only one that even involves riding in a vehicle, only instead of avoiding fast-approaching obstacles with no margin for error, the game suddenly turns into an action-packed shoot em up where you blast away everything in sight by way of Contra-esque powerups. All in all, this is exactly what the franchise should have been from the beginning. 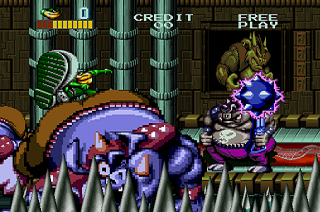 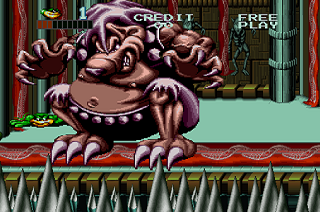 So it took them five or so tries, but Rare finally managed to put together a great BattleToads game  that most people have never even heard of. Hence they promptly abandoned the franchise and started releasing games about monkeys instead. But who knows, perhaps someday it will be possible to download old arcade games onto one of todays modern consoles, and Rare will somehow find themselves affiliated with this consoles parent company. Stranger things have happened . . . like the existence of a great BattleToads game.

If you enjoyed this BattleToads review, you're encouraged to discuss it with the author and with other members of the site's community. If you don't already have an HonestGamers account, you can sign up for one in a snap. Thank you for reading!

© 1998-2021 HonestGamers
None of the material contained within this site may be reproduced in any conceivable fashion without permission from the author(s) of said material. This site is not sponsored or endorsed by Nintendo, Sega, Sony, Microsoft, or any other such party. BattleToads is a registered trademark of its copyright holder. This site makes no claim to BattleToads, its characters, screenshots, artwork, music, or any intellectual property contained within. Opinions expressed on this site do not necessarily represent the opinion of site staff or sponsors. Staff and freelance reviews are typically written based on time spent with a retail review copy or review key for the game that is provided by its publisher.