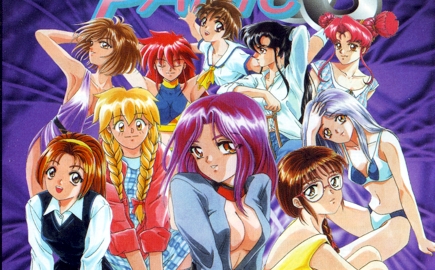 (For the purposes of this review lets just pretend youre not in the pathetic nerd category, okay?) 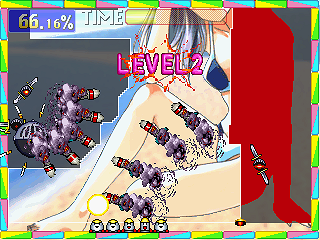 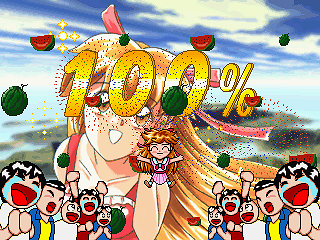 Replacing the meager arcade roster are twelve brand new characters, each one challenging you with five different scrolling pictures to uncover instead of only three. Simply avoiding the enemies and uncovering at least 80% of every silhouette to finish all these rounds would be pretty simple, except it would also be missing the whole point. Your true goal on each board is to garner a perfect 100% completion rating (once again punctuated with sparkling fireworks and a brief shower of watermelons) and thus unlock a bonus shot unique to that picture, but since they instantly end with a rather incomplete victory as soon as you hit that 80% mark youll need to be a little crafty. By luring the boss creature into one of the corners and cutting it off from the rest of the board, you can then chip away the glowing sections on its newly-made island and subsequently uncover all the remaining silhouette in one fell swoop  all the while avoiding its frequent projectile attacks and the hordes of smaller enemies crowding the screen, of course. You get infinite continues, but exhaust your current batch of lives or the quickly-dwindling timer and youll have to start that round all over again. These pictures also vary significantly in terms of their ratio of silhouette to background as well as their positioning, so some are pretty easy to score a 100% on, while others are nearly impossible.

Fortunately a gallery mode lets you look at all the pictures youve cleared or unlocked at your leisure, and clearing all of a girls rounds with a 100% rating, whether in one go or on multiple playthroughs, further unlocks a massive final spread. Unfortunately despite the huge number of pictures to work on, there are only four different bosses, all of which fire slightly different variations on the same projectile attack. Youll be seeing the same enemies over and over again, and theyre nowhere near as cool as the coinops giant Mode-7 centipede with its flamethrower breath, or the giant suns conspicuously absent ability to blast a massive laser beam that would actually cover part of the picture back up. Obviously Kaneko concentrated the lions share of their efforts on the actual pictures themselves; while Gals Panic 4 mostly just used the same types of scenes over and over again, this time youll find a wide variety of lavishly drawn poses ranging from lounging by the seashore to lovingly hefting a long, smooth . . . assault rifle. And in addition to the expected parade of school uniforms, yukata, and bathing suits, they also thought to include some interesting characters like the sporty redhead in overalls, delinquent girl gang boss, and what appears to be some sort of bow-wielding pixie. 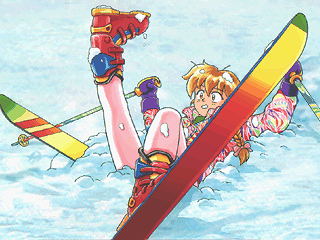 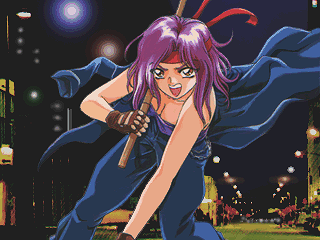 But dont get too excited there, Sparky  remember that the art style is aiming for saccharine cuteness rather than trying to be sexy; there might be a bit of cleavage here and there, but its all presented in an innocent sort of way and amazingly enough the character designs appear to be over the age of eighteen for a change. If you were hoping for the teenage schoolgirls and leather-clad queens of the later games youre almost certainly going to be disappointed, but Gals Panic SS confounds all other expectations by being a worthy Saturn import. 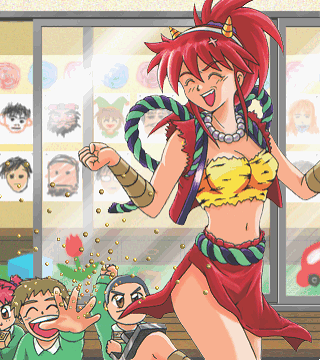 If you enjoyed this Gals Panic SS review, you're encouraged to discuss it with the author and with other members of the site's community. If you don't already have an HonestGamers account, you can sign up for one in a snap. Thank you for reading!

© 1998-2021 HonestGamers
None of the material contained within this site may be reproduced in any conceivable fashion without permission from the author(s) of said material. This site is not sponsored or endorsed by Nintendo, Sega, Sony, Microsoft, or any other such party. Gals Panic SS is a registered trademark of its copyright holder. This site makes no claim to Gals Panic SS, its characters, screenshots, artwork, music, or any intellectual property contained within. Opinions expressed on this site do not necessarily represent the opinion of site staff or sponsors. Staff and freelance reviews are typically written based on time spent with a retail review copy or review key for the game that is provided by its publisher.