No discussion of memorable Nintendo games would be complete without The Adventures of Bayou Billy  theres little shortage of steaming loads on the NES, but its not every day that you run into one thats been intentionally driven into the ground by its own development team. Since its a widely accepted fact that when it comes to action games we American gamers are veritable supermen compared to our nerdy, Dragon Quest-loving Japanese brethren, Konami laid the foundations for such future translations as Castlevania III, Contra: Hard Corps and Devil May Cry 3 by reprogramming Mad City so that it would be impossible to play. I mean not even CAPTAIN N can beat this, and hes a GAME MASTER. 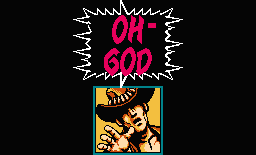 You see, instead of tinkering with the AI or something clever, Konami just gave all the enemies about six times more health  imagine a beat em up where you fight nothing but bosses, and there can be three of them at any given time. Oh, and you only have three moves at your disposal: a punch, a kick, and a jumping kick. Even if you can avoid getting pounded in retaliation, which isnt going to happen since your opponents dont recoil or show any other signs of discomfort after being struck, it takes *forever* just to knock out one generic thug and get to the next screen. You simply cannot make it out of a level without losing all your lives and being forced to start over again. 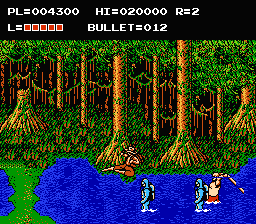 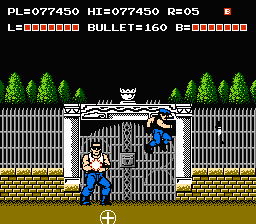 But this isnt just a frustrating excuse for a brawler  you also get a pair of driving scenes that consist of swerving back and forth to avoid poles on either side of the road while helicopters drop missiles on you. Not only did Konami discard the life meter in favor of instant death for daring to graze anything on the screen, but they drastically reduced the time limit while simultaneously making both courses about three times longer than their Japanese counterparts. Since you dont have time to slow down and actually steer, and yet cant afford to hit anything since youll have squandered any chances of having extra lives thanks to that army of bosses in the previous levels, its easy to see why even the mighty Game Master would swallow his pride and call NINTENDO POWER for help.

PROTIP: Play OutRun instead.
Ironically enough the original Mad City is actually really easy since the enemies can only absorb two or three hits before expiring and the driving sequences are so much shorter. The early bayou stages even feature a different layout that lets you just wade right through those gator-infested pits instead of trading blows with them for ten minutes. As a typical red-blooded American übergamer, I was able to clear the entire game in one go. Graphically this version is also a bit different as the enemies use a different color palette and the driving stages actually have trees and lamp posts instead of squat wooden poles just sticking out from the grass. But more importantly, the typically kidnapped damsel Annabelle sports a full-length dress instead of her familiar halter top and cutoffs, marking the lone moment in Nintendo history that a game was more revealing in America than Japan. Too bad our version omits the alternate ending where you can ditch that bimbo and go hunting for crawdads instead. 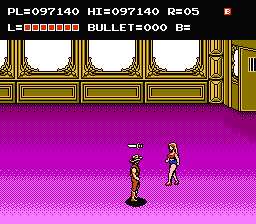 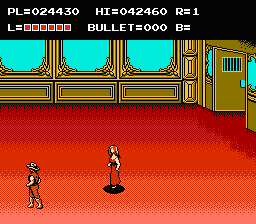 Of course the Japanese version is still too much of a bland, extremely limited beat em up to be a lost classic or anything; it just starts to resemble an actual game instead of a portable torture device when you can go toe-to-toe against a lone goon without collapsing in a heap or exploding into a fiery ball of misery every three seconds. Take my advice, N-man  forget about Annabelle and concentrate on wooing Princess Lana away from the well-tanned clutches of Simon Belmont. That swamp hussy just aint worth it. 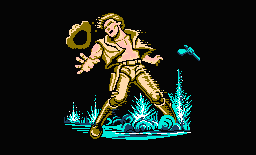 ---
HEY, GAMERS! If you enjoyed this game for some reason, see also:
Exile II (TurboGrafx CD)
Original game balance improved by Working Designs in order to make it literally impossible to complete.

If you enjoyed this The Adventures of Bayou Billy review, you're encouraged to discuss it with the author and with other members of the site's community. If you don't already have an HonestGamers account, you can sign up for one in a snap. Thank you for reading!

© 1998-2021 HonestGamers
None of the material contained within this site may be reproduced in any conceivable fashion without permission from the author(s) of said material. This site is not sponsored or endorsed by Nintendo, Sega, Sony, Microsoft, or any other such party. The Adventures of Bayou Billy is a registered trademark of its copyright holder. This site makes no claim to The Adventures of Bayou Billy, its characters, screenshots, artwork, music, or any intellectual property contained within. Opinions expressed on this site do not necessarily represent the opinion of site staff or sponsors. Staff and freelance reviews are typically written based on time spent with a retail review copy or review key for the game that is provided by its publisher.