You know, I can remember once seeing this game on the release forecast within the hallowed pages of NINTENDO POWER  man, Nintendo of America must have shit themselves when they got a preview copy, because Sweet Home is the grotesque inspiration for Resident Evil.

Despite having been at least nominally based on an unbelievably retarded Japanese horror film of the same name, Capcom managed to salvage it for one sick but awesome Famicom RPG. When your hapless team of investigators becomes trapped in the notoriously haunted Mamiya mansion, theyre forced to split up into separate groups of two and three so they can cover more ground or something equally asinine. You wont find any role-playing staples like inns, bosses, or magic spells around these parts, and death has a tendency to be rather final, although there are at least a large number of healing potions scattered about. Each of your characters plays pretty much the same as well, and they can only carry two inventory items apiece at any given time  but youll need every one of them, as each member also possesses a unique object that youll need time and time again, whether its Emis skeleton key, Akikos first aid kit, or Asukas . . . vacuum cleaner. Apparently doing battle with decaying hordes from beyond the grave is just another nights work, but when theres broken glass around youd better call in a professional. 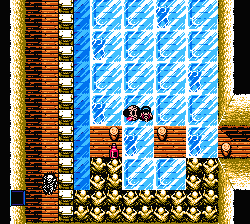 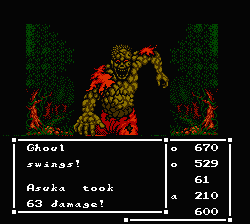 Much like those survival horror titles it inspired, the puzzles in Sweet Home are actually pretty simple  youll use a flashlight to remove walls of shadowy energy that block your path, put down planks of wood in order to cross gaps in the floor, or slip on a glove in order to explore a forest overgrown with thorns. But while the paltry inventory space should seem just as familiar, there arent any item boxes lurking around anywhere. When your inventory is full youll have to swap the item you want with one youre already carrying, and then remember exactly where you left it, because theres never any indication if youll ever need to use a specific item again. You might come across multiple copies of common items in the course of your travels, but its no fun to suddenly need to remember where those locations were an hour later, and you wont have time to go hunting for a pickaxe while hurtling down a slippery sheet of ice and straight into a pit of hungry corpses inviting you to join them. 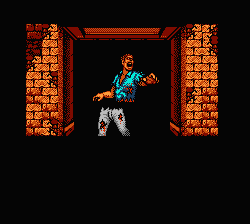 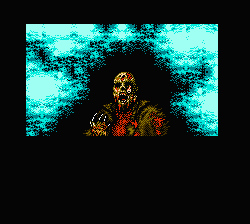 Of course, one cant help but admire any 8-bit game that offers fine craftsmanship like slippery corpse pits, and this one seldom disappoints with its downright gruesome visuals. One of your characters died? Youll be treated to a short scene of him being sliced in half or slumping to the ground beneath a large pool of blood. Youll also encounter the remains of previous teams who never made it out of the mansion, currently in the form of putrid zombies with their entrails still squirming behind them, and battle enemies like the naked scythe-wielding lunatic whose crimson hide is writhing with oozing sores of delicious pus. Even in a house where blood seems to be a core component of the interior decorating scheme, its still rather unsettling to watch a characters flesh slowly crack and dissolve from his newly exposed and rather confused looking skull. How did Capcom USA ever expect to get away with this? Oh, right.

Since losing a teammate is a potentially game breaking event, youll occasionally find clones of the character-specific items, but unlike the originals they become subject to the two-item inventory limit. You really want to keep everyone in the realm of the living anyway, since there are a few slightly different endings depending on the final number of survivors. Fortunately splitting up your investigators doesnt mean you have to divide your strength every time you get into a random encounter thanks to a pretty sweet option in the command menu. Whenever one of your parties is in the middle of a battle you can call the other team for help, giving this second group a short amount of time to run over and lend a hand (or preferably, axe.) Not only does this help keep everyones experience levels from lagging too far behind the others, but your assisting characters cant stumble into to any additional enemies on the way over, allowing a weaker group to more easily catch up if they become separated across a considerable distance.

It might not be a masterful epic along the lines of that other famous Famicom RPG, I think its called Final Fantasy III or something, but on the other hand Squares games arent renowned as grisly works of horror and madness. Not unless you go back to their Famicom Disk System days, anyway. But Sweet Home is more than just a glimpse into the earliest workings of what would become survival horror, its a pretty inventive take on the genre in its own right.

If you enjoyed this Sweet Home review, you're encouraged to discuss it with the author and with other members of the site's community. If you don't already have an HonestGamers account, you can sign up for one in a snap. Thank you for reading!

© 1998-2021 HonestGamers
None of the material contained within this site may be reproduced in any conceivable fashion without permission from the author(s) of said material. This site is not sponsored or endorsed by Nintendo, Sega, Sony, Microsoft, or any other such party. Sweet Home is a registered trademark of its copyright holder. This site makes no claim to Sweet Home, its characters, screenshots, artwork, music, or any intellectual property contained within. Opinions expressed on this site do not necessarily represent the opinion of site staff or sponsors. Staff and freelance reviews are typically written based on time spent with a retail review copy or review key for the game that is provided by its publisher.