Aye, no doubt yer timbers are already shivering in anticipation of wreaking untold havoc across the Spanish Main. Sacking formerly prosperous colonies into fiery ruin alongside your crew of drunken buccaneers, forcing snooty enemy captains to walk the plank after making off with their fancy doo-dads, or showing a buxom doxy just how you got the name Long John  itd bring a tear to me eye if that murderous winged devil hadnt torn it right out of the socket.

Well dont just stand there, ya scabrous flotsam  get a shivering! Bwahahaha, thats more like it! You obviously recognize the three simple facts of life:

1.) Pirates are totally sweet.
2.) There is nothing more badass than a pirate (even if its Johnny Depp sashaying about in mascara.)
3.) Refer to fact #1.

If theres anything in this pitiful world that can possibly withstand the sheer mind-blowing awesomeness of the deadly NINJA (radicalius maximus), it would have to be the rumsoaked life of a villainous corsair. So yed best strap on the flintlocks and sharpen that wit, because any scalawag worth his salt will surely be finding this modern remake of Sid Meiers classic Pirates! is pure, polished gold. 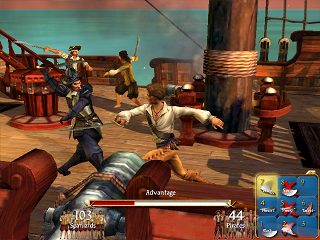 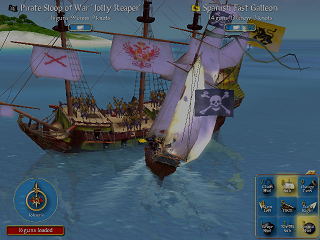 Chock full of the same timeless gameplay that canonized its predecessors, only running on an engine thats been fully brought up to date, its an unforgettable experience for stalwart fans and newcomers alike. Ostensibly your goal is to locate your missing family members and exact sweet revenge on the wicked Marquis de Montalban, but as always you can do pretty much whatever you please. Armed with official letters of marque from the great powers of Europe, you can loot their enemies ships and colonies for plunder, fame and titles, but you could also try the life of a peaceful trader or simply declare war on everybody and engage in all-out piracy against anyone unfortunate enough to cross your path. Of course going that route means youll only be able to sell off your swag at the pirate havens scattered across the map, and once you really start irritating a specific country theyll start sending out heavily-armed warships to end your depredations, but no one ever said a pirates life was easy.

Admittedly the resulting game is almost completely aimless, and yet youll find yourself consistently coming back for more as theres always something new and exciting you can choose to do  its utterly open-ended from start to finish. The Caribbean changes not only as time passes but often as the direct result of your actions  settlements grow richer or poorer as you decimate their shipping or start pumping the market with pillaged goods, and inconvenient outbreaks of peace can hinder your plans for advancement, while declarations of war provide new opportunities and potential allies. You may decide to turn against your erstwhile patrons if the price is right, or convince one of the sympathetic Jesuit missions to plead your case with one of the enemy governors for amnesty. Fighting on the side of the Spanish in particular is much different (and harder) than the others, as they control the most ports by far and thus offer the fewest targets  on the other hand theyre pretty much always at war with someone and sure to reward a diligent pirate hunter or Costa Garda. This is in addition to accepting missions for the individual governors, serving as an armed escort, or going ashore to search for buried treasure after purchasing a map fragment from a suspicious character at the local pub  and while youre there, be sure to chat up the barmaids for helpful advice on what to do next or possibly fend off the amorous advances of a would-be bravo. 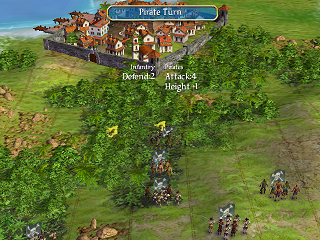 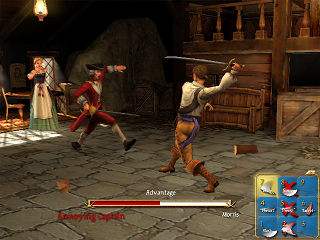 Since everything is completely optional and all those choices can quickly become overwhelming, the world map notes all the events that happen in each town, as well as all the important destinations, quests, or clues. But perhaps the most important enhancement is that you can now see all the ships sailing around you in real time. In previous editions youd just be cruising along all by your lonesome looking for plunder until a message popped up alerting you to a distant vessel. Youd still have to advance further to identify its colors and then decide whether to sail away or close for battle, all via menus of commands. Now you can actually watch all the various convoys and raiders as well as their affiliations at a mere glance, and attack them with a single click of the mouse. Should a Spanish treasure galleon spot you and beat a hasty retreat, youll actually have to chase it down  come too close to an enemy fortress and it starts warding you off with cannonfire. This doesnt just make things a lot more fast-paced and firmly focused on action, it really brings the Caribbean to life as a veritable fleet go about their trade routes and pillaging instead of it just being your own vessel moving across an expansive yet seemingly empty ocean.

Of course youll still have to navigate by paying attention to the winds, especially in ship-to-ship combat as you try to pull alongside an enemy vessel to rake them with your thundering cannons, hang a sharp turn to avoid their answering volley, or speedily crash right into them for a little boarding action. Thats when its time to cross blades in a cinematic swashbuckling duel  with both crews clashing all around you, youll have to watch your opponents moves and correctly time one of six available strikes or parries in order to drive the scoundrel to a watery end. Thanks to the modern hardware these battles are also now frequently punctuated by cool moments like smashing your opponent down a convenient flight of stairs, whereupon you drive your blade down into the wooden step, only to miss by a hair and cause the coward to scamper for safer footing  or toss a handy bucket at him so he tumbles onto some burning wreckage and desperately leaps into the cool embrace of the sea. 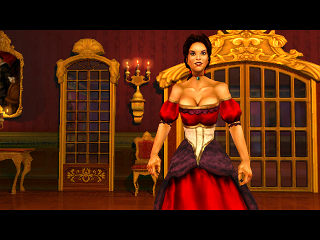 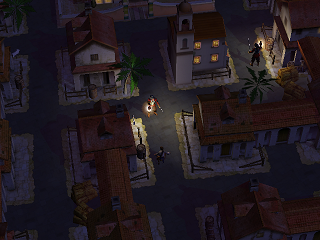 There are even a few new mini-games added to the mix: should a governors daughter take a shine to your roguish charms she may invite you to the ball, requiring you to prance and twirl about on the dance floor like some silk-swathed, slipper-wearing dandy. Win the fair fillys heart and shell shower you with info and gifts, or even her dainty hand in marriage  just make sure the lads dont ever find out about your frilly antics on the dance floor. After all, that sort of thing can be anathema for a stinking, grog-swilling villains carefully crafted reputation. Sneaking into a town whove had quite enough of you, on the other hand, is no longer simply a message indicating whether or not you succeeded: now youll have to actually creep through lamplit streets in the dead of night while avoiding patrols of guards. One significant removal is the old ploy of attacking a settlement by sea  in the earlier games you could literally capture a city with only a handful of men merely by sailing right into its walls while easily avoiding a wave or two of cannonfire and then dueling the commander to conquer the whole place. Now youll always have to march in on foot, commanding small squads of pirates and buccaneers in a simple turn-based strategic assault thats a lot more appropriate for whats supposed to be a major accomplishment.

As time passes, eventually your character will grow too old to continue his adventuresome exploits and the number of salty dogs willing to sign on with you become increasingly scarce. But dont get your buckles in a swash just yet, you can always create a new captain and begin your murderous rampages anew, especially since theres no way you can possibly see everything this game has to offer in a single playthrough  or half a dozen. With each subsequent edition over the years having been celebrated as a quintessential example of a sandbox masterpiece, the latest iteration of Pirates! is far from buried, but this is one treasure that belongs in every PC gamers glittering hoard.

If you enjoyed this Sid Meier's Pirates! - Live the Life review, you're encouraged to discuss it with the author and with other members of the site's community. If you don't already have an HonestGamers account, you can sign up for one in a snap. Thank you for reading!

© 1998-2021 HonestGamers
None of the material contained within this site may be reproduced in any conceivable fashion without permission from the author(s) of said material. This site is not sponsored or endorsed by Nintendo, Sega, Sony, Microsoft, or any other such party. Sid Meier's Pirates! - Live the Life is a registered trademark of its copyright holder. This site makes no claim to Sid Meier's Pirates! - Live the Life, its characters, screenshots, artwork, music, or any intellectual property contained within. Opinions expressed on this site do not necessarily represent the opinion of site staff or sponsors. Staff and freelance reviews are typically written based on time spent with a retail review copy or review key for the game that is provided by its publisher.