I make no secret of my undying love of X-Com. Hell, if there was a T-Shirt saying DEATH TO THE TENTACULAT! I would be the first to pay whatever outrageous price was slapped on it and wear it proudly. I'd display the hideous floating brain creature's crest with pride as I strolled around busy towns, no doubt stopped by random passers by to ask were I obtained such an awesome garment. We would exchange tales of doomed raids into Aquatiod bases, the mounting fear of the non-stop MC attacks that turned our forces against us and of the first time we saw, with mounting dread, the tentacle-heavy form of a Tentaculat floating towards us. It would be grand.

The same cant really be said of X-Coms spiritual successor, UFO: Aftermath. Should I purchase a shirt displaying one of the mammoth Car Crabs that star in the intergalactic opposing forces displayed within, the only reason girls would stop to flirt would be my devilish good looks and suave wit. To summarise, Aftermath set itself a lofty goal in taking up where X-Com left off and it never quite makes it. 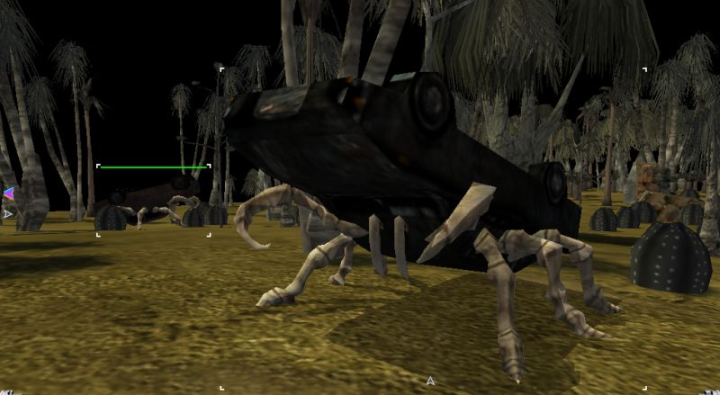 Both games share a lot of similarities: youre defending the Earth from extraterrestrials that want more than a handful of small change to phone home with, and you do this on a tactical battlefield. Both war efforts depend largely on clever micromanagement and constant research into bigger and better weapons, but where X-Com just drops a war into your lap then slowly turns up the difficulty, Aftermath tries a more cinematic approach that could work if it wasnt lost in the background.

Im not sure why ALTAR gave their game such a promising plot then did nothing at all with it. The game opens with a toxic cloud of alien spores enveloping the Earth, killing off the vast majority of the populace and leaving millions more as grotesque, twisted mutants. This is never fully expanded upon until the game is beaten. Sure, there are a few missions that revolve around the underdeveloped plot but the story aspects of these sorties are, well, underdeveloped.

As are aspects of the game itself, such as the way you obtain safehouses and bases. Rather than place floating HQs in strategic positions, you take over empty bases scattered across the Earths blistered surface. They start out as nothing more than husks, leaving it completely up to you what to do with them; you can launch attack choppers from them, turn them in R&D labs or even manufacture new weapons from them. The drawback? Complete lack of customisation and the huge number of bases available to you means losing a few has no urgency to it. There are seven more just behind that hill, so why go all out to defend that military camp on your boarders fringe? 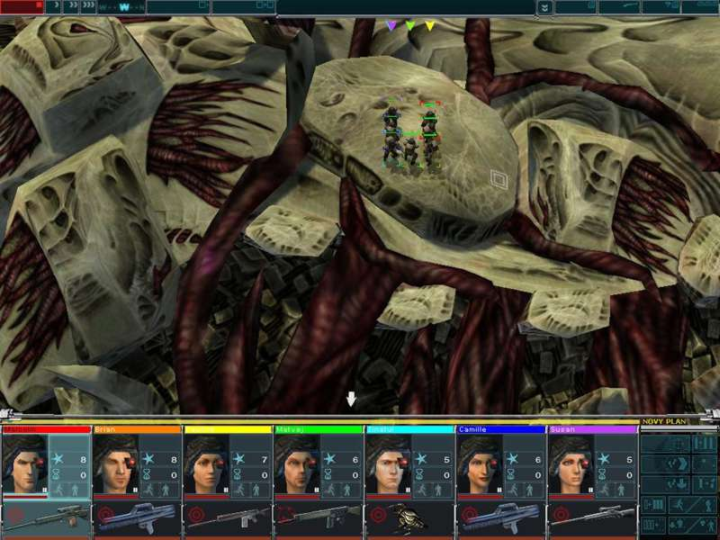 Not having to worry about the little things is a common motif. X-Com made you buy or lease the fighter planes or subs that chased down enemy UFOs. They made you buy the hangers that housed, repaired and refuelled them and made you accountable for every bullet they fired, every missile launched and every last adaptation you made to them. Here, jets are sent out without thought or consequence. You can send millions of fighters to their death and theyll be silently replaced without prompt or cost. Theres just as little urgency to promptly dispel threats, either. Not quickly aiding allies in X-Com loses you precious funding from the governments you neglect, Aftermath offers a weedy slap on the wrist by taking away small amounts of territory which are easily reclaimed if need be.

Invading territory generates a random mapscape tied together with differing missions. The X-Com standard of leave nothing alive applies throughout, but youre also asked to capture bases, retrieve downed pilots, and collect biological/technological samples. And to begin with, its an easy task. Fighting the infected humans that fell foul of the intergalactic spores requires little in the way of tactics; just line your troops up in a rough line and wait for the dumb mutants (or Transgenents, as they're known here) to run screaming at your gun wall. Aftermath even makes your troop allocation easy: levels built from fighting are slotted into specialist skills and outfitting you crew with niche weaponry is wonderfully simple. You're given just enough time to build a veneer of confidence before the actual aliens show up and blow you to hell and back with well-thrown grenades and pin-point heavy weapon strikes.

Theres not so much a difficulty curve as there is a screeching 180° difficulty hairpin.

But this is okay, challenge is good. When lumbering idiots like the Transgenents make way for the seriously scary Car Crabs, you need to start really playing the game. You cant just meander though battlefields slaying the odd moron that runs at you, you have to worry about ambushes, about grenades and rockets emanating from the dark, about snipers and monsters with biological cannons grafted on to their arms. These are good things to worry about, and if you only had these concerns on your mind, then so much the better. But you also have an enemy in how the game controls at times. 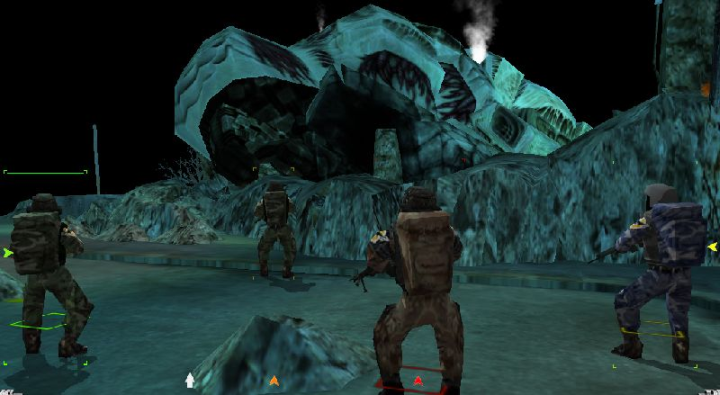 Although that could be a little unfair as, with a lot of tinkering, you can pretty much make the control system exactly the way you want it to be. Annoyances like each unit switching to hard control while youre in the middle of issuing orders to different units can be done away with, but until you take the time to tinker, you'll find this happens without you noticing and the wrong orders will be issued to the wrong trooper. Want to send your sniper up high to oversee the arena? Sorry! Your scout just completed his order to flank that boulder and has now overridden you sniper in the command queue. Looks like its a long walk back to the snipers location for him! Yes, you can edit this out, but that its the default setting causes early headaches.

Likewise, things like priming grenades are equally as slow and plodding as they are in X-Com, a game made some ten years earlier. You need to put your gun down, transfer the grenade to your hand, prime the grenade, throw the grenade then re-equip your gun to your hand. Surely by now some better way to do this has come forward?

Group orders are hardly ideal, either. Lasso a group together and ask them to storm a room and off they happily march. However, its obvious that a lighter-armed scout will get there long before a heavy-weapon packing specialist will. For Christ sake, one has a pistol and the other packs a rocket launcher bigger than he is! The scout will get there first and then wait for his chum to catch up. No matter how long it takes, he refuses to do anything else until the entire platoon has arrived, making the group advance order completely useless. No playing around with the interface will ever change this.

Aftermatch is chocked full of little annoyances like this which erode at a pretty fun tactical game that has long since been made completely obsolete by its superior sequels, Aftershock and Afterlight. Thats not to say that its not worth playing -- it is -- behind the rotten controls and annoying quirks beats a strong strategy heart that both aforementioned titles build upon successfully, but it sits in a unique position of not being quite as good as the game it hoped to build upon and being completely outclassed by the ones that followed it. 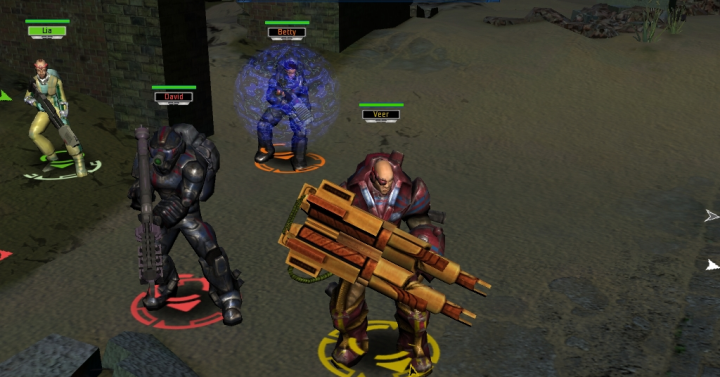 Ill stick to my fantastic DEATH TO THE TENTACULAT! T-shirt for now. Its cool in theory, with the text blazing in red upon black cloth and the Lovecraftian floating brain emblazoned underneath, hungry tentacles trailing lazily beneath the bulk of the fleshy pink frontal lobe. It works so well because the game from which it comes from conjures up vivid and fond memories. The Car Crab one, well, doesnt.

If you enjoyed this UFO: Aftermath review, you're encouraged to discuss it with the author and with other members of the site's community. If you don't already have an HonestGamers account, you can sign up for one in a snap. Thank you for reading!

© 1998-2021 HonestGamers
None of the material contained within this site may be reproduced in any conceivable fashion without permission from the author(s) of said material. This site is not sponsored or endorsed by Nintendo, Sega, Sony, Microsoft, or any other such party. UFO: Aftermath is a registered trademark of its copyright holder. This site makes no claim to UFO: Aftermath, its characters, screenshots, artwork, music, or any intellectual property contained within. Opinions expressed on this site do not necessarily represent the opinion of site staff or sponsors. Staff and freelance reviews are typically written based on time spent with a retail review copy or review key for the game that is provided by its publisher.