The main character of Demon Sword is a ninja named Victar. I don't know much about him, but I do know one thing: He's cool. Or, at least, that's what the game wants you to think. The game wants you to believe that Victar is tough and all-powerful, that he can do anything, because ninjas are just that cool. And this attitude is reflected in the title screen. Observe. 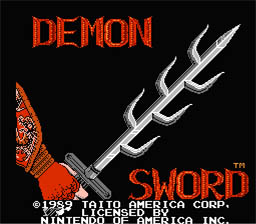 Yeah, that's how badass Victar is: He'll kill you with a hat rack.

You know what else Victar can do? He can fly. When you push up on the d-pad  alas, there is no jump button in Demon Sword  you will send Victar soaring fifty feet into the air, clearing entire trees in a single bound! Victar can fight as well  with his hat rack and throwing stars  but what point is there to battling when you can effortlessly glide far over your foes heads? I say take the action to the treetops and leave your ninja foes stranded at ground level. A stretch of land that would take ten minutes to clear with a normal videogame character can be completed in thirty seconds with Victar at your command.

The game must have known you could do this. It seems that when the player is granted a godly jumping ability of this magnitude, hell use it to his advantage. Why, theyre skipping levels now! Thats no good! But how could the game rectify this problem without removing its star quality, Victars spring-loaded leaping?

There is a solution, and youre not thinking of it!

You see, if a player is able to skip entire levels by casually hovering fifty feet over his enemies heads, the obvious answer is that you put some enemies up there, too! Why, lets have some ninjas falling from the sky. That ought to keep those no-good flying Victars on ground level! That way, whenever a player tries to use his abnormal jumping mechanic to his advantage, hell be bombarded with a rainstorm of ninjas! Sounds like a plan.

Isnt that bending the rules a bit too much? Never mind. Isnt the game just remedying one flaw with another? Never mind!

You see, Demon Sword relies very little on player input. Its a game that does what it wants to do, not what the player is trying to accomplish. And it doesn't mind stretching its own limits to get what it wants. Say Im jumping over a Bottomless Pit of Death. My jump is well-timed, and it looks as if Ill safely land on the other side. But the game says, Nope. Youre going to die in this pit, whether you like it or not. And in the middle of my jump, Victar comes to a halt in midair and plummets directly into the pit. Like an anvil.

In a separate instance, I fell into another such Bottomless Pit of Death, this time by accident and not because the controls are broken (though they are). The game apparently said, I wont let a pit steal my glory, Suskie! Youre not going to die yet! And a bird came out of nowhere and rescued me from what could have been a dark and unpleasant demise.

Maybe youll be fighting a boss when the game thinks to itself, I definitely dont want him to beat this guy. And the boss is granted the ability to kill you, in one hit, by touch. Even when your life bar is full. Seems unfair to me, but hey, you cant argue with Demon Sword. Thats an argument you wont win.

While experimenting with Demon Sword, however, I made an astounding discovery: The game evidently wants me to cheat by jumping over everything, because every time Ive attempted to beat Demon Sword the correct way, the game snaps back at me with enemies that come out of nowhere and outsmart my useless weaponry. The general pattern one follows for winning any side-scrolling action game is to defeat all the enemies in an area, and then move on. If you use this strategy, you will play Demon Sword for the rest of your life, because enemies respawn indefinitely from all directions at a rapid rate. You could literally stand in place and never run out of ninjas to fight. I guess when they started falling from heaven, your match was pretty much set.

You can try fighting them, but it does you no good. Sometimes your attacks work; sometimes they dont. It all depends on the mood the game is in at the moment. Youre better off bouncing through the treetops, because up there, your only foes are the ones from the ninjastorm.

Victar could have been cool. His monumental leaping prowess is a bragging right that few other ninjas have, but if you take it away, he's left with nothing but a hat rack and a set of absolutely pitiful throwing stars. I believe that Victar's god-given skill was granted to him to cancel out his piss-poor weaponry and provide us with a hero who nails both extremes. So while Victar sucks, that doesnt mean hes not cool.

Likewise, Demon Sword is awful, but that doesnt mean its not a riot.

If you enjoyed this Demon Sword review, you're encouraged to discuss it with the author and with other members of the site's community. If you don't already have an HonestGamers account, you can sign up for one in a snap. Thank you for reading!

© 1998-2021 HonestGamers
None of the material contained within this site may be reproduced in any conceivable fashion without permission from the author(s) of said material. This site is not sponsored or endorsed by Nintendo, Sega, Sony, Microsoft, or any other such party. Demon Sword is a registered trademark of its copyright holder. This site makes no claim to Demon Sword, its characters, screenshots, artwork, music, or any intellectual property contained within. Opinions expressed on this site do not necessarily represent the opinion of site staff or sponsors. Staff and freelance reviews are typically written based on time spent with a retail review copy or review key for the game that is provided by its publisher.