As its title implies, The First Fear is an enhanced update of the original Clock Tower on Super Famicom. Unfortunately these enhancements are so meager that youd have to be a really hardcore fan of the series to even bother with it. 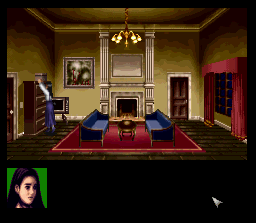 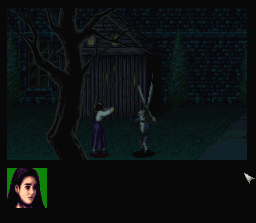 The most significant change is actually the sound effects, many of which are taken straight from Clock Tower 2. Whether something as simple as a creaking door slamming shut behind you or a terrified scream echoing through the house, the audio is a major step up from the strained earlier samples. Now youll actually be able to hear the demonic parrot fly around the room while chanting Ill kill you, and youll know when youre being chased by the Scissorman by the tireless SHING! of his blades scraping together instead of the originals laughable snip. The music itself is also slightly different, presumably because of the PSXs sound chip, because its not really a change for the better.

On the other hand, Human apparently didnt want to bother updating the graphics, as they dont look any better than the 16-bit version. If you look closely the palette may be slightly different, but its hardly worthy of notice one way or the other. The steam-filled bathroom and pouring rain atop the titular clock tower have been redone with mixed results, and a few extra close-ups shots like the aforementioned Parrot of Doom have been spliced in, but other than a pathetically simple FMV at the beginning there really isnt anything new to see, other than a very minor tweak to the ending sequence tying it into the sequel. 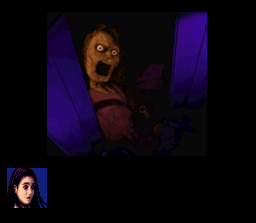 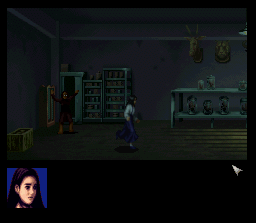 Unfortunately the tweaks to the gameplay are every bit as disappointing. You can actually save your progress in the middle of a game now, but its not a particularly important addition since theres only one slot available and a single playthrough is so short to begin with. The Super Famicom featured a door in the west wing that couldnt be opened  now it leads to a bedroom lacking anything of interest whatsoever, leaving one to puzzle over why it was even put back in. And speaking of puzzles, theres only a single new one: instead of the key to the animal pens just lying around in front of their cages, now youll have to kill that mummified corpse lurking in the trophy rooms locker. Theres also an incredibly stupid glitch in that you wont be awarded the S or A rankings if you decide to kill off Ann instead of Laura at the beginning of the game, which should tell you how thoroughly this version was tested before being shoved out the door.

This game could have been awesome had it actually used any of the PlayStations extra capabilities, expanded on the original game with more puzzles, or simply implemented random Scissorman attacks as in the sequel, but instead its a quick and utterly lazy port thats only selling point seems to be its relative rarity. Youre really not missing anything by sticking with the unofficial translation instead, and depending on where you get it this game can either be really expensive or dirt cheap, so if you still have to own First Fear make sure its the latter.

If you enjoyed this Clock Tower: The First Fear review, you're encouraged to discuss it with the author and with other members of the site's community. If you don't already have an HonestGamers account, you can sign up for one in a snap. Thank you for reading!

© 1998-2021 HonestGamers
None of the material contained within this site may be reproduced in any conceivable fashion without permission from the author(s) of said material. This site is not sponsored or endorsed by Nintendo, Sega, Sony, Microsoft, or any other such party. Clock Tower: The First Fear is a registered trademark of its copyright holder. This site makes no claim to Clock Tower: The First Fear, its characters, screenshots, artwork, music, or any intellectual property contained within. Opinions expressed on this site do not necessarily represent the opinion of site staff or sponsors. Staff and freelance reviews are typically written based on time spent with a retail review copy or review key for the game that is provided by its publisher.