At first glance Tombs & Treasure might resemble a 1st person dungeon crawl, but it actually plays more like a dumbed-down Shadowgate with a helping of faux-RPG elements tossed in for good measure. Originally released by the outrageously awesome developer Falcom for Japanese-only computers like the PC-88, in addition to this port there are also two separate remakes: one for Windows and an older release for the Saturns Falcom Classics II. Of course all those appear to be radically different from the NES version, so now you know as much as I do about the history of this game.

What I do know is that you assume the role of a young adventurer accompanied by his emerald-haired girlfriend and freakishly muscular guide to explore the Mayan ruins of Chichen Itza. It seems that the team of archeologists led by said girlfriends dear old pop Professor Imes has disappeared without a trace during their latest excavation, so its up to you to follow in the good doctors footsteps and uncover the mysteries lurking beneath this fallen city. Of course the in-game story development is practically nonexistent, so the mysteries are just a collection of puzzles and the ending in particular comes out of nowhere. 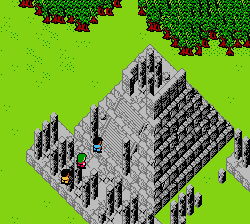 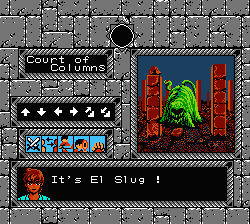 While they are indeed presented in a first-person perspective, each of the tombs is only a few screens large at most, so theyre far from mazelike. In fact theres only one part of the entire game that appears to stick you in a labyrinth, but its actually just another inventory-based puzzle. Most of your time is actually spent wandering over a sprawling overhead map whenever youre searching for these ruins, but since the entrances are invisible it can be pretty difficult to determine which of the countless buildings dotting the landscape can actually be entered and from where. Apparently the game box is supposed to include a fold-out map, which may very well prove useful to anyone who manages to snag one of the ten copies that havent long since crumbled into dust.

Unfortunately once you enter a tomb youll find your options are pretty limited: other than standard actions like look, take, and push, the remainder of your command menu consists of weird icons like wash that youll typically only use once. Its a nice touch that the cursor automatically scrolls between all the available hotspots, so you never have to pixel hunt for an item or switch, although this does make exploring each new area rather easy. You can occasionally switch to one of your partners in order to employ their special abilities as well, which apparently consist of either brute strength or being girly; but its always blatantly obvious when to do so because the necessary character will make a comment about it. Theres also a ton of backtracking to earlier areas, although its often just as obvious when you have to do so. Near the beginning of the game youll find a headless silver statue, only to later stumble upon a disembodied silver head  you dont have to be Roberta Williams to figure that one out! The hard part is figuring out where in the hell youre expected to hike to next thanks to that giant overworld, or in the case of backtracking, trying to remember which location was where. 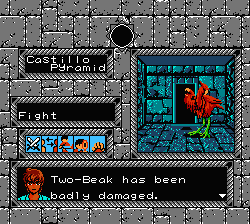 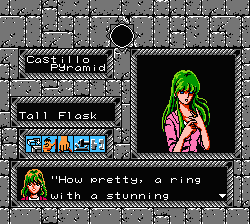 Now you may have noticed that a few of the screenshots appear to depict combat sequences, but in reality theyre just a way to ensure that youre visiting all those tombs in the proper order. There arent any specific battle commands; you simply select fight and either inflict a ton of damage if youre at the required level or barely put a dent in your opponent and have to run away. Occasionally youll have to combine an item with your sword in order to win, but there are only ten enemies in the entire game and your HP is completely restored after each battle, so solving all the puzzles up to that point will cause you to breeze through these segments. Im not even sure what happens if you manage to die, since it never happened to me. In fact I was able to complete the entire game in one sitting, which was helpful since theres an annoyingly long password that you have to copy down every time you want to save.

The arent really any other games like Tombs & Treasure on the NES, and if youre the type who gets frustrated by the ICOM games countless red herrings and incredibly lethal puzzles youll probably enjoy it. An experienced adventure gamer, however, will find the simplified gameplay and trial-by-error exploration every bit as frustrating in their own, linear way.

If you enjoyed this Tombs & Treasure review, you're encouraged to discuss it with the author and with other members of the site's community. If you don't already have an HonestGamers account, you can sign up for one in a snap. Thank you for reading!

© 1998-2021 HonestGamers
None of the material contained within this site may be reproduced in any conceivable fashion without permission from the author(s) of said material. This site is not sponsored or endorsed by Nintendo, Sega, Sony, Microsoft, or any other such party. Tombs & Treasure is a registered trademark of its copyright holder. This site makes no claim to Tombs & Treasure, its characters, screenshots, artwork, music, or any intellectual property contained within. Opinions expressed on this site do not necessarily represent the opinion of site staff or sponsors. Staff and freelance reviews are typically written based on time spent with a retail review copy or review key for the game that is provided by its publisher.