 Amorous nights on the town spent in the company of several buxom lasses!

 Shameless displays of tawny, oiled flesh writhing about in the bedroom!

But enough about me, lets get on with the review! Unlike some of the other Sierra remakes, this update of the original Leisure Suit Larry is essentially the same game, albeit a much flashier one. The outlandish visuals are obviously a major leap forward  the world of Lost Wages has been completely redefined in 256-color VGA to the point where it looks like a zany cartoon. Those lovelorn ladies, on the other hand, go for sultry realism . . . except for that one time when you have to get it on with a deluxe model blow-up doll, but that doesnt really count. But while the graphics have become a lot more detailed, they share one thing in common with their predecessor: a big, bouncing CENSORED bar to obscure any bedroom shenanigans that might be afoot. Youll also notice considerably more animation in addition to digitized sound effects and a fantastic musical score if you have an MT-32. 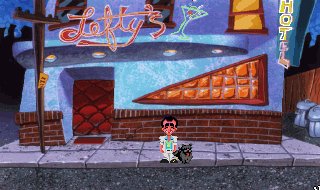 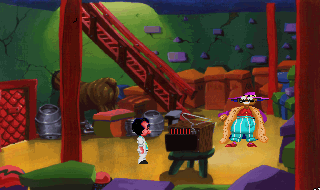 Depending on your tastes, these exaggerated sights and sounds can also be something of a double-edged sword; theyre a lot sillier that the originals simple, seedy locales that relied more on your (presumably filthy) imagination. Despite Larrys previous appearance as a body-building stud back in Passionate Patti in Pursuit of the Pulsating Pectorals, this remake also marks the transformation of our hero from a losery everyman into a grotesque, Pinocchio-nosed homunculus.

But the most important departure here is definitely the gameplay; instead of a text parser, youll use the point & click icon-based interface introduced in Kings Quest V. While the change definitely makes things both easier and faster-paced, it also excludes one of the best things about the original. That parser was a lot more clever than most of its contemporaries and let you do a lot of wacky, occasionally demented things which a row of predefined icons simply cant live up to. Who can forget entering those colorful verbs while sitting on the toilet, or being chastised after telling Larry to whip out his member for a bit of personal time, or getting it bitten off after trying to perform oral sex on a cheap hooker? And speaking of Larrys attempts at lovemaking, this was already a pretty short experience, and the ease with which youll be able to solve everything makes it even more noticeable. 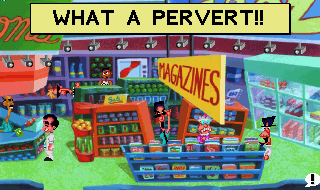 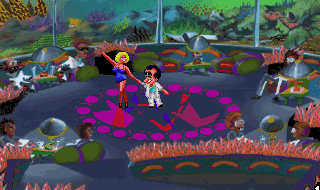 None of the puzzles have been altered either, even the clunky ones like getting the television remote from a drunk outside the bathroom. The dialogues with the sex hotline and QuikiMart clerk have been extended ever so slightly, but the only other additions are a few Saddam Hussein jokes thanks to the release date. At least the time-devouring gambling sequences have been streamlined; the blackjack machine now lets you bet everything you have rather than the meager old $20 limit, so youll typically have more than enough money after only a few wins.

Make no mistake, Lounge Lizards VGA is a fun game, but much like Quest for Glory its source material holds up a lot better than that of the other remakes. Your enjoyment level is pretty much going to boil down to whether you prefer Sierras classic EGA adventures or their later point & click offerings. Just make sure to avoid the recent Vivendi compilation, which makes the choice for you by leaving out the original EGA game, the high-resolution version of Shape Up or Slip Out, and Love for Sail! Our heros adventures may often involve getting screwed, but that definitely isnt what he has in mind. 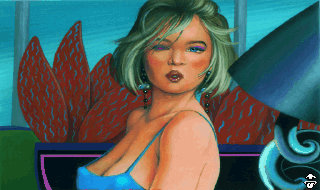 If you enjoyed this Leisure Suit Larry 1: In the Land of the Lounge Lizards (VGA Remake) review, you're encouraged to discuss it with the author and with other members of the site's community. If you don't already have an HonestGamers account, you can sign up for one in a snap. Thank you for reading!