As Im sure were all aware, Hideo Kojimas SNATCHER is one kickass adventure. Set in a futuristic city full of synthetic-skinned endoskeletons who murder humans in order to steal their identities, youre the amnesiac investigator Gillian Seed, who blows them away with his big manly gun. If by some (admittedly remote) chance youve never heard of this inspired fusion of Blade Runner, Terminator and Wacky Japanese Perverts on Parade, I can only assume that something must be horribly wrong with you. Seriously, this game seems to get resurrected almost as often as Count Dracula. Whether the 8-bit original (now with fan translation), the definitive Super CD, or the beloved English-only Sega port, you certainly have more than enough ways to experience it  but in 1996 Konamis favorite cyberpunk adventure returned to Japan for this one last overhaul. 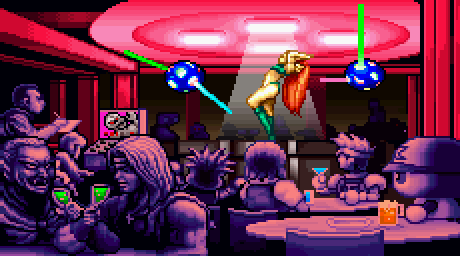 Does it live up to its legendary predecessors?

Is it worth buying yet again?

Are you going to continue reading this review? 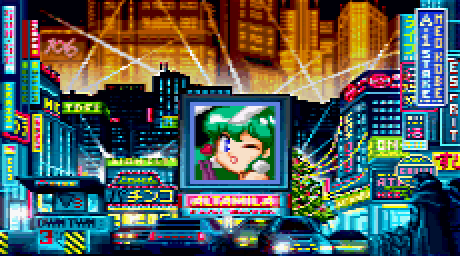 The first thing youre going to notice, other than an almost comically wretched opening FMV, are the graphics  theyve been considerably enhanced, at least in terms of the color palette. Besides a few added details, some of the characters and scenes have even been redrawn completely; Snatcher has always featured awesome graphics, but the Saturn sports a fresh enough look that youd never guess how ancient it really is. Since this is one of the Japanese versions youll get to see the more perverted scenes that were excised from the domestic release, like the time our hero engages in a bit of panty-snatching for the good of the mission (it may be important evidence, after all.) And of course it just wouldnt be Snatcher if gruesome murders werent involved. Unfortunately while these visuals still get pretty explicit, the really violent scenes have been toned down: youll still encounter decapitated heads and maggot-ridden skeletons, but only if you remember not to blink. Also of note is the formerly unsettling sequence involving Katrinas dog; the redraw has been censored so heavily that its practically tame. From what I understand the PlayStation version is even more censored than this one; ironic as it sounds, the American Sega CD release is actually gorier than either of them. The voice acting, on the other hand, is exactly the same as on the PC Engine. In other words, outstanding. From our heros deep, manly voice and the squeaky admonishments of his pint-size robotic buddy/straight man METAL GEAR (Mk II!) to the mysterious bounty hunter Randam Hajiles terminally calm bravado, the Japanese acting blows away its English counterpart like so many insectors. Its a damn shame they couldnt do the same for the music. Seriously, everything is either lame elevator muzak or bouncy techno beats that sound like they were composed on a cheap MIDI keyboard and bear little or no resemblance to any of your favorite classic tunes. You know, its a pretty sad commentary when the MSX2s add-on sound cart from 1988 can absolutely destroy a CD-based system sonically. Konami is capable of so much better than this  actually, they have done better than this, considering all their sweet arranged albums like Zoom Tracks and the hard-rock Snatcher Battle. Another new feature youll discover is a short first-person maze towards the end of the game, which feels more like last-minute padding than anything else. A more favorable addition can be found in the increased ferocity of the shoot-outs, offering more aggressive tactics and smoother animation on the part of the enemy Snatchers. And while it obviously has no effect on the game itself, its pretty disappointing that theres so little in the way of swag. The Saturn remake shipped with a sheet of stickers and little else; you wont find an oversized manual or short color manga as with the PC Engine version. Considering that the Saturn Policenauts that came out the same year was packaged in a slipcase and included a small hardcover illustration book, this further suggests that Konami focused on beefing up the graphics and subsequently ceased to care. Ultimately Snatcher remains an excellent game in any form, even if all Konami really offers here is one major improvement in exchange for some noticeably detracting changes. That said, Id much rather stick with the PC Engine for its total package of colorful visuals, memorable soundtrack, and sordid content even if it might be merely 16-bit. For the past decade it looked as if this was indeed the end of the line for Kojimas venerable one-game series, but like all his work it refuses to die: the long-awaited relaunch of this franchise has been confirmed with multiple projects in the works, including a possible sequel for the Nintendo Wii. Considering the surprise PSP revival of Dracula X, can yet another remake be far behind?

Only time (and potential profits) will tell. If you enjoyed this Snatcher review, you're encouraged to discuss it with the author and with other members of the site's community. If you don't already have an HonestGamers account, you can sign up for one in a snap. Thank you for reading!

© 1998-2021 HonestGamers
None of the material contained within this site may be reproduced in any conceivable fashion without permission from the author(s) of said material. This site is not sponsored or endorsed by Nintendo, Sega, Sony, Microsoft, or any other such party. Snatcher is a registered trademark of its copyright holder. This site makes no claim to Snatcher, its characters, screenshots, artwork, music, or any intellectual property contained within. Opinions expressed on this site do not necessarily represent the opinion of site staff or sponsors. Staff and freelance reviews are typically written based on time spent with a retail review copy or review key for the game that is provided by its publisher.