There was something oddly familiar about BUG! when I played it for the first time. It reminded me of another game. But as I made my way through the first area, going in and out of the background on a maze-like, narrow path, I couldn't put my finger on it. I just kept going through these long acts, collecting blue crystals scattered everywhere, jumping on top of various bugs with unusual designs (one's outer skin falls down when you attack him, revealing his boxers), and venturing into simple but challenging bonus stages with a sense of deja vu. It wasn't until my green bug with an attitude had to fight the first boss, which was a giant snail that occasionally turned into a bomb-dropping snailcopter, that the other game came to mind: Sonic the Hedgehog.

The three acts, oddball insect/animal foes, level designs that have many paths, and platforms that require that right jump... it's basically all here. The only thing missing is the speed. Heck, Sonic even makes a cameo in one of the bonus stages. The whole game just feels like it was inspired by the Sonic Genesis titles, and I think that was for the good, because from the start, you'll actually feel like you're taking on a challenge. Unlike most games, where it'll feel like someone's holding your hand for the first few levels, BUG! expects you to know how to play a platform title right away. The first act alone will give you a workout by making you go through a lot of enemies, force you to memorize patterns as you pass a field of spikes, and move across a narrow platform that shakes back and forth. And you better get the hang of that first act, because the following two acts will bring it with an onslaught of falling boulders from the background (and I do mean onslaught), paths that almost end up being their own entire stage, and enemies and objects that are placed juuust in the right spot to make life that much harder on you. All before the first boss, too. 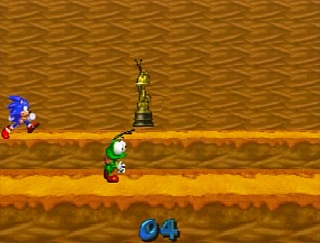 But while BUG! will give you moments of platforming bliss, it'll also give you a couple of problems as well. One minute, you're having a blast with challenging and fun platform segments, but then a minute later, you'll end up in silly situations. For instance, thanks to the camera being focused right in front of your character and usually doesn't move until he reaches the end of the screen, encountering enemies is a pain. It doesn't help that most of them just suddenly appear attacking, giving you just a split-second to react.

Also, while platforming can be enjoyable, there are some that you'll run into that are really annoying, disrupting the flow of an act. Like this one segment, later on in a snowy area, where you'll have to go through a path of platforms. There's no other path to take, so this has to be done. It starts off simple, where you'll just have to make huge jumps from one platform to another as they crumble and fall. Seconds later, you'll have to leap from one tiny platform, onto a floating bug, and then onto another tiny platform. Eventually, you'll have to jump on two other floating bugs just right if you wanna make it to the next itty platform. You'll die at that part a lot before you get it right. And since you don't run into a checkpoint anywhere between the start and that point, you'll take a long trip back every time you fall to your death. 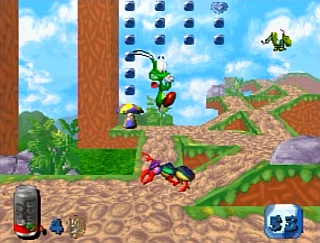 Sadly, there's a lot of these moments in the game, and they really shouldn't be as hard as they are. But thanks to the game's somewhat wonky hit detection, you'll utter, "I didn't touch him..." or "I landed on the edge of that platform... why am I falling?" a lot. BUG! just feels unnecessarily hard at times. It's not impossible, but you'll need a lot of patience to get through it. If the developers would've fine-tuned the difficulty a bit, certain moments could've been much better. However, if you wanna play a good, solid platform title, go back to Sonic (and its superior sequels). Shouldn't be that hard to find, since it's on almost every single Sega collection released.

If you enjoyed this Bug! review, you're encouraged to discuss it with the author and with other members of the site's community. If you don't already have an HonestGamers account, you can sign up for one in a snap. Thank you for reading!

© 1998-2021 HonestGamers
None of the material contained within this site may be reproduced in any conceivable fashion without permission from the author(s) of said material. This site is not sponsored or endorsed by Nintendo, Sega, Sony, Microsoft, or any other such party. Bug! is a registered trademark of its copyright holder. This site makes no claim to Bug!, its characters, screenshots, artwork, music, or any intellectual property contained within. Opinions expressed on this site do not necessarily represent the opinion of site staff or sponsors. Staff and freelance reviews are typically written based on time spent with a retail review copy or review key for the game that is provided by its publisher.