Another ball hurtles past your defenses, and that loathsome skull in the corner once again erupts into an all too familiar cackle of mocking glee. Naked bone but for the numerous oozing veins that snake across its cranium, this fleshless spectator is wont to track your every move with the aid of a single protruding eyeball, and all too happy to celebrate your frequent ineptitude. Thats Devils Crush, easily one of the most addictive titles ever released for the woefully underrated TurboGrafx 16  or any other console. Following in the frenetic footsteps of Alien Crush, this even darker sequel more than upholds its predecessors reputation for ferocious action and believable physics. Your ball may rocket about, violently colliding with bumpers and careening off flippers with all the reckless abandon of  well, a pinball  but no matter how chaotic things get it always feels like the real thing. Assuming one could find a real machine swarming with demons in miniature, that is.

Where the original delivered a limited yet memorable array of spidery extraterrestrials ripped off from H.R. Giger, Devil instead conjures up entire hordes of undead horrors straight from the Nine Hells and swarming over every inch of its three scrolling screens. But the ultimate goal remains the same: to repeatedly light up all the multipliers via the rampant destruction of these plentiful monstrosities and rack up a dizzyingly high score in excess of a billion points. Naxat even threw in a password system so you can save and subsequently recall your progress at any time, making this seemingly impossible victory attainable as long as you have the unbridled manliness to continue playing. And youll want to. 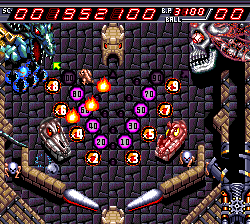 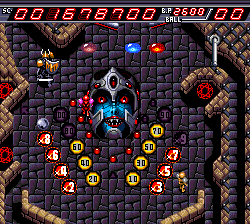 The reason for this desire should become apparent almost at once. Upon forcefully blasting that first ball into the thick of this fiend-infested plane, youre immediately assaulted by a feverishly paced yet appropriately sinister tune of pulsating drums and wailing synthesizers  not to mention an army of tiny skeletons that protectively circle around the motionless visage of a slumbering maiden. Should you maneuver past these bony bodyguards and successfully lodge your ball within her crown for a handsome bonus, this demonic debutante will revive just enough to reveal a pair of vacant eyes and sharp fangs. For each time you angle your way into one of the surrounding portals, however, shell begin to gradually undergo a startling transformation as her once lovely skin cracks apart to reveal a repulsive serpent with leathery blue-green scales, slit red eyes, and a cruelly fanged maw that will quickly swallow your ball whole.

But you needn't fret, for it's merely been transported to one of the game's eight bonus rounds! The fastest way to rack up a hefty sum is to seek out these exciting extras, typically within the depths of a whirling dimensional gate or secured in the gaping jaws of some horrid beast. Not only does each one feature its own aggressive tune but also a unique objective as well: breaking apart a cabal of bearded wizards that summon forth a legion of minions from within their rune-covered circles, perhaps, or shattering a score of clay vessels from behind indestructible corpses that quickly reassemble themselves after being reduced to dust. But whether its towering lizardmen whose spears hurl you backwards into oblivion or merely a ravenous five-headed dragon, clearing a bonus round also nets you a temporary cerulean ball that doubles the value of whatever it hits. Dont get too used to it though  these previously visited levels will get even harder by adding another pitfall that has to be simultaneously defended with a second pair of flippers. 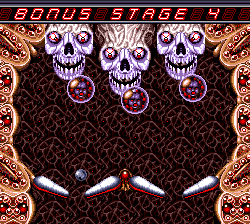 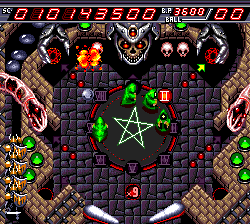 Upon being tossed back onto the main board youll find your reptilian host has resumed her innocuous human guise. Rather than disturb her again, why not try breaking down the oaken doors in the corner? Oops! A troop of massive skeletal knights lurking behind huge metal shields proceed to march down the narrow tunnel beyond and bar your attempted invasion, their numbers grunting in pain with every landed blow. Perhaps youd be better served taking the front door  bounce off one the colorful blobs shuddering to and fro along the upper regions and you may catch a glimpse of the screen above: a giant pentagram endlessly revolving as hooded sorcerers pace around its points. Yet another oversized skeletal creature sits at the very top of this cramped and thus incredibly volatile region, orbs of flame lighting its sockets and a magical portal clutched tightly in each of its ivory-jointed claws . . . unless you can halt the necromancers star at precisely the right time.

When you do inevitably screw up and plummet all the way down to the lowest screen youll finally reunite with your friend, the merry one-eyed skull. Keeping him rather poor company are a set of stone caskets alongside the flippers, their lids eventually bursting open to reveal four-legged fiends that quickly scatter across the board  right by the immense dragon that sleeps above. It wont appear to notice if you smash apart its cluster of spotted eggs, but rouse this wyrms ire and it begins spewing waves of fireballs all over the place. Remember not to get distracted, seeing as how the corners of this last screen are exposed and thus vulnerable, and should the ball once again slip away . . .

Whatever your favorite genres might be, Devils Crush will prove to supply countless hours of strangely compelling yet unquestionably enduring entertainment. Go on. Give this devil its due.

If you enjoyed this Devil's Crush review, you're encouraged to discuss it with the author and with other members of the site's community. If you don't already have an HonestGamers account, you can sign up for one in a snap. Thank you for reading!

© 1998-2021 HonestGamers
None of the material contained within this site may be reproduced in any conceivable fashion without permission from the author(s) of said material. This site is not sponsored or endorsed by Nintendo, Sega, Sony, Microsoft, or any other such party. Devil's Crush is a registered trademark of its copyright holder. This site makes no claim to Devil's Crush, its characters, screenshots, artwork, music, or any intellectual property contained within. Opinions expressed on this site do not necessarily represent the opinion of site staff or sponsors. Staff and freelance reviews are typically written based on time spent with a retail review copy or review key for the game that is provided by its publisher.