Before Runaway: The Dream of the Turtle came Runaway: A Road Adventure. Usually when reviewing a sequel, its accepted custom to use your first few paragraphs to delve into the original game and give the reader some background, offer a few notes on the differences between the two titles and then transition jerkily into how the series links up. Im not going to do that. Take that conformity!

Im not going to do that because the two prominent leads in A Road Adventure are much changed and the escape-the-mafia plotline dropped all together. Previously, Brain Basco was a nerdy research assistant fresh out of collage and Gina Timmins was an exotic dancer who always managed to find herself in the middle of trouble. But those days are gone: Brains lost the glasses, swapped the polyester shirt and pocket protector for chic beachwear, and grown out his hair into a shaggy mop. Gina could be the same as she was; Im not all that sure. She gets approximately ten minutes in-game time, which she spends being very naked in environments that cleverly cover up her assets. 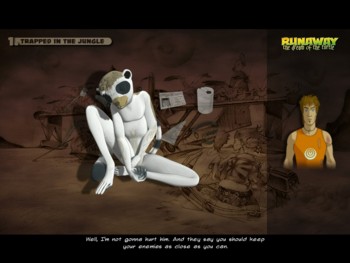 Notice how hes in what seems to be an inventory screen? Thats because, like every point n click game worth its salt, the lead can spot an item that most of us would pass off as useless junk and see instead a valuable means to reach his goal. In the case of our aforementioned fuzzy friend, Brian meets him after the plane he and Gina were taking to Mala Island underwent an unfortunate accident. Alone in the thick foliage of the jungle, Brian not only has his girlfriend to worry over but also the fate of senile, toothless pilot, Otto. His search needs to start; this is achieved by robbing the crashed plane carcass of all and any junk lying around in the wreckage.

The lemur pops up after you exit the crumpled hull and discover yourself trapped in a sea of undergrowth, your poor plane having wrapped itself around a particularly large tree. After gutting your former ride of anything of worth, you set out to explore the jungle. The next screen over shows a pool of quicksand, an unassailable cliff and a rotting log connecting the two. Theres only a couple of problems. The large boulder you need to bypass to reach the log is covered in a slimy moss that makes climbing it impossible and  him. 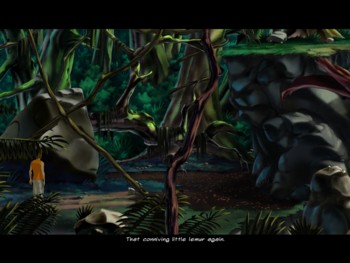 Even when you find a means to bypass the boulders slippery surface of impassability, the fuzzy little bastard will tap in to some form of ninja training to strike you from the log, throwing you off your jungle exit and depositing you barely past the ominous lake of deadly quicksand. Youll pick yourself up, dust yourself down, shake an angry fist at the pest and then be forced to think. After all, you have pockets filled with enough junk to try and outsmart what is little more that a stunted monkey. Surely you can beat him with, amongst other things, your missing girlfriends hair clip, a magnifying glass, half a bottle of whisky, a robotic dog that urinates and a shard of glass.

My first thought was to stab him with the glass shard, too. But Dream of the Turtle is a family friendly game.

It would be cheap of me to spoil how you finally do away with the little demon, but do away with him you must! And while he lays beaten and unconscious at your feet, you do what any self-respecting adventure protagonist will do. You file him away in your pockets.

Later on when youve finally found your way out of the accursed jungle, you decide its time to dump all the junk youve accumulated to make the search for your girl more comfortable. The robo-dog goes, the hairclip was used earlier, and the shard of glass is safely disposed of. But, as for the lemur and the whisky. 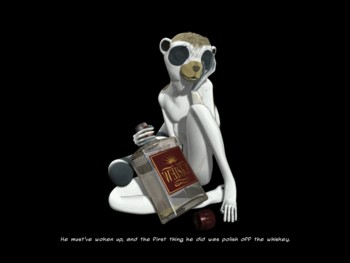 He must have woken up and the first he did was polish off the whisky.

The inventory-stealing rodents escapades here highlight the games quirky sense of humour that more often than not hits the mark. Perhaps it over-relies on the becoming-dangerously-obligatory attack-on-the-forth-wall that a lot of adventure games now like to use in spades (as in, it was funny when Rincewind did it in Discworld. Back in 95) and genre familiarity is assumed and very much needed to enjoy a lot of subtle in-jokes, but if youve not already played and loved the classics like Monkey Island, then this probably isnt the game youre looking for.

Runaway doesnt just make cheeky digs at the adventure games of yore, either; it actually has the gall to improve on them in several aspects. While still holed up in the jungle, Brian has need to fashion and operate a primitive slingshot. Slingshot construction is a common enough point n click endeavour which universally consists of combing three items:

I found the first two in short order, but despite a careful sweep on the undergrowth with my mouse, no rock was forthcoming. It wasnt until I used my unarmed slingshot on my prospective target (in the hopes of obtaining a clue) that something previously unheard of came to pass. Brian bent down, picked up a rock of his own accord, and blasted the selected target. It shouldnt have surprised me; earlier on I examined something slumped in the goopy pool of quicksand and, when asked to retrieve the object, instead of the its out of reach vocal prompt I expected, Brian turned around, grabbed a branch form the foliage behind him and fished the item out without further complaint. 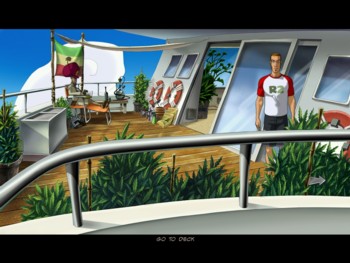 An avatar that can think for himself! Why has it taken so long for this to happen? More than anything else, what this does is do away with a much-practised form of game padding lazy developers employ to artificially lengthen their games. While Runaway commendably kills off one avenue of fluff, it must plead guilty to a few others. When trying to repair the friendship of two reoccurring characters (the Rasta-chemist, Rutgur, and the techno-artist, Saturn) Brian is forced to converse with one member of the quarrelsome pairing, highlight a key phrase of the conversation, twist it into a more flattering statement and then deliver it to the counterpart. The path connecting the two bids you to stroll across a ships deck, ride an elevator between floors and open a hi-tech glass door leading into a bar-come-workshop. Not counting the few times in which a player will use the incorrect dialogue branch prompt and have to start over, this one trip will have to be traversed at least a dozen times. Back and forth.... Back and forth....

Its of good cheer to note that such instances are not common place. A few little life-enhancing tricks are bought out of retirement here and there (such as a few continually spammed unskipable CGI mini-scenes showing such acts as Brian getting ready to go deep-sea diving) but for the most part, Runaway is allowed to flow at its own pace. While you need to adjust your brainwaves to pick up Adventure Game Logic© (by jove, if I combine this colander with this here lump of blu-tak, I find myself in possession of a rather snazzy hat  huzzuh!) things proceed in a wholly realistic fashion; with obtainable puzzles that will fall with a bit of deep thought and lessen the need for the typically-employed sweep-the-mouse-everywhere method so many of the older games force you to endure.

Everythings wrapped up in a torrent of solid voice acting living within a cel-shaded, cartoon-tinted wonderland that thrives in a sea of bright shades and pseudo-realism, gifting the game with a unique look and feel. The backdrops depicting lazy beaches, busy military camps, frozen wastelands or crumbling ruins are stunning; the character models tight and the whole style distinct and striking. The apparel only ever comes under scrutiny when character close ups are employed, highlighting Runaways inability to capture facial emotions as well as it would obviously have liked. Brian seems to be the only person in the world cursed with droopy square eyes  its a shame then that they receive significantly more extreme close ups than anything else!

It all comes back to the lemur. In a lot of games, the furry half-pint would be used for a quick gag then thrown away. In Runaway he is bought along for the rid and improved upon throughout. The tree-rat seems to embody The Dream of the Turtle; it has a cuddly, non-threatening look, is several times smarter than it would at first appear and charms laughs out of you instead of forces them. And longer you spend in its company, the more you find to enjoy.

And if thats not enough to convince you to try the game, then I have but three words for you, my cynical chum: slinky bikini girls. 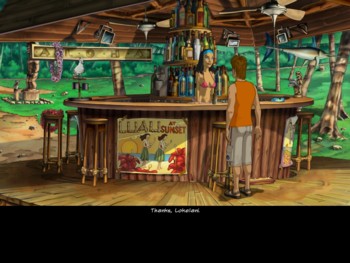 If you enjoyed this Runaway: The Dream of the Turtle review, you're encouraged to discuss it with the author and with other members of the site's community. If you don't already have an HonestGamers account, you can sign up for one in a snap. Thank you for reading!

© 1998-2021 HonestGamers
None of the material contained within this site may be reproduced in any conceivable fashion without permission from the author(s) of said material. This site is not sponsored or endorsed by Nintendo, Sega, Sony, Microsoft, or any other such party. Runaway: The Dream of the Turtle is a registered trademark of its copyright holder. This site makes no claim to Runaway: The Dream of the Turtle, its characters, screenshots, artwork, music, or any intellectual property contained within. Opinions expressed on this site do not necessarily represent the opinion of site staff or sponsors. Staff and freelance reviews are typically written based on time spent with a retail review copy or review key for the game that is provided by its publisher.