What, you didnt catch any of that? Well then this might not be quite the game for you. Biing! (Sex, Intrigen und Skalpelle!) is more than just a hospital management sim; its a hospital management sim full of German  and naughty nurses! Yes, not only did proud pornographic developer ReLine go for a hearty helping of outrageous black humor à la Theme Hospital, but youre constantly surrounded by cheeky cartoon women baring their big, bouncy pleasure globes for medicinal purposes. This is because all Deutschlanders are complete perverts, but surprisingly enough even without all the eurofilth this would still make for a pretty decent game.

I mean, just check out the epically long and totally bizarre opening, which includes a long attract mode describing what appears to be an anime-themed, outer space shoot em up complete with a parody of R-Type . . . except that none of it has anything to do with the real game whatsoever, which should give you a clue as to what kind of minds were dealing with here.

Presented in high-resolution SVGA, the psychotic visuals are definitely Biing!s main focus and quickly establish its gleefully sadistic sense of humor. Your neurology department is headed by a bespectacled doctor in boxer shorts whos riding a motorcycle, pressing a gun to his head, and typically prescribing his patients to die folterkammer: a friendly neighborhood torture chamber equipped with iron maidens, electric chairs, and a leather-clad, crop-wielding S&M queen eager for those long nights of . . . treatment. And on the subject of unholy brutality, the dentists office looks more like a gore-splattered hardware store, while the organ bank is a gloomy dungeon inhabited by cloak-wearing vampires. The audio is a nice touch as well  besides the usual sounds of typing, filing, and frenzied screams, youll also be treated to workout beats, a bit of rap, and Crocketts Theme from Miami Vice. 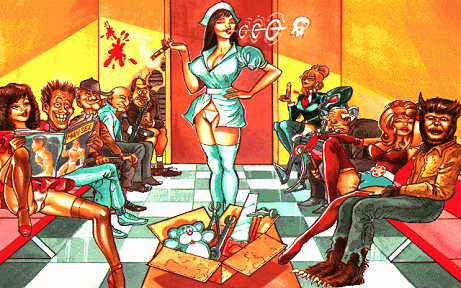 Since someone has to staff all these places youll also need to put out want ads for all the different types of personnel, judging not only silly things like education, training, and wages but your potential applicants golf scores and cup sizes. And in addition to the diverse range of medical departments available youll also need to construct a kitchen, storage area, and garage, not to mention bars and a golf course so your philandering physicians can unwind. But lest you think the inmates are running the asylum, try taking a gander at the patients: dirty old codgers, crazed lunatics, futuristic robots, gangsters still holding their tommy guns, scantily-clad hookers brushing up on the latest issue of MAN SEX, and of course the wolfman. Fortunately when everyone starts getting sick of sitting around in the increasingly crowded waiting rooms, you can distract them by instructing the attending nurse to take it all off! In fact, most of the female characters will strip down to their skivvies (or less) with a simple click, and running the cursor over various objects and people often causes them to temporarily change appearance. 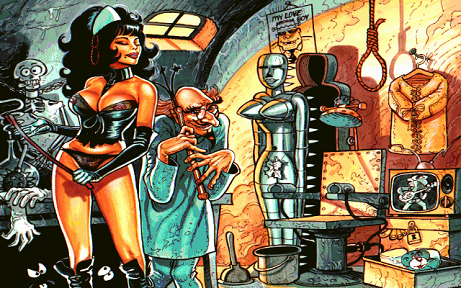 The only real problem with this amorous art is that its almost entirely static; youll always see the personnel and equipment for each room even if theres actually no one stationed there, and have to separately click on each one for its status. As such it can be rather tricky to ensure that each area is always properly covered (as well as properly uncovered), particularly due to automatic breaks and shift changes. Fortunately you are alerted whenever a new victim patient shows up or theres an update for one already being subjected to your tender, loving care, and clicking the first-aid kit that pops up will instantly transport you to their location. Not only do these patients have the decency to only appear when they actually exist, but a few of the other screens do offer some limited animations to show theyre ready for business  for instance, the skeletal corpse moldering over in the corner of your admissions foyer will have one of its gooey eyes start dangling out of the socket while the secretary indifferently licks her similarly drippy ice cream cone. 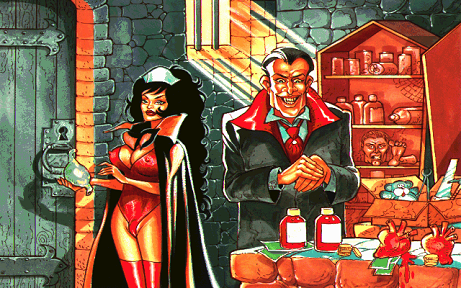 But dont think that just because Biing! is completely brain-cracked means its not a serious sim  this would be a tough game even without the language barrier. Every morning typically begins with a massive mountain of expenses and the bank demanding that you be turning a profit by days end or commit ritual suicide in the alley out back. You cant start out too ambitiously either; you can only afford to lease a few (preferably lucrative) departments at first, bouncing your customers from one expensive treatment to the next until youve gouged as much as you can out of them, and only then gradually add new or extra rooms, staff, and equipment. Attempting to buy space outright or branch out in too many directions at once is a recipe for disaster; considering how easy it is to majorly screw everything up, its a good thing there are plenty of save slots. New patients and thus revenue are constantly streaming, albeit at a random pace, but if things get too slow you can try skipping a few hours via the clock in the main office  or better yet, hire a bat-toting hooligan to rough up the competition as well as drum up a little business.

Man, it certainly is a shame that there are so many menus, on-screen options, and dialogue windows to navigate through, what with everything being in German and all. Why, if Biing! was available in English Id recommend it wholeheartedly to anyone who enjoys management sims!

If you enjoyed this Biing!: Sex, Intrigen und Skalpelle review, you're encouraged to discuss it with the author and with other members of the site's community. If you don't already have an HonestGamers account, you can sign up for one in a snap. Thank you for reading!

© 1998-2021 HonestGamers
None of the material contained within this site may be reproduced in any conceivable fashion without permission from the author(s) of said material. This site is not sponsored or endorsed by Nintendo, Sega, Sony, Microsoft, or any other such party. Biing!: Sex, Intrigen und Skalpelle is a registered trademark of its copyright holder. This site makes no claim to Biing!: Sex, Intrigen und Skalpelle, its characters, screenshots, artwork, music, or any intellectual property contained within. Opinions expressed on this site do not necessarily represent the opinion of site staff or sponsors. Staff and freelance reviews are typically written based on time spent with a retail review copy or review key for the game that is provided by its publisher.