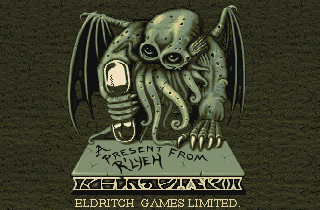 That is not dead which can eternal lie,
And with strange aeons even death may die.
Just in case the winged tentacular monstrosity wasnt enough of a clue, this game is set in the mythos of H.P. Lovecraft and thats got to count for something. Daughter of Serpents also features some nice artwork depicting 1920s Cairo, decent music if you have an MT-32, and of course a murderous cabal of inhuman cultists skulking about the ancient ruins beneath the city. Things certainly start off on the right foot/claw with a sinister reptilian creature engaged in a bit of stabbery aboard an ocean liner whilst upstanding British gentlemen turn their practiced eyes toward the ladies derrieres. 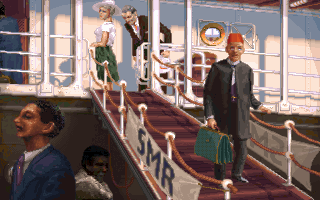 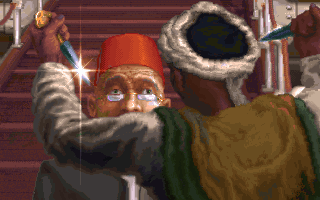 Like the earlier Eldritch adventure Hound of Shadow, you begin by rolling up a character using the same rules as the Call of Cthulhu pen & paper RPG. There are six possible archetypes ranging from a hard-boiled private eye to an occultist knowledgeable in forbidden lore, each with its own distinctive set of skills for you to assign points to as well as allowing for a bit of cross-specialization. You can even select your personas gender, nationality, and title in addition to those niggling details like personality, education, and crippling psychological disorders before setting out to greet the LURKING HORRORS ahead.

Unfortunately these role-playing elements are in truth nothing but foul, unspeakable LIES with only minimal influence on anything once you actually start playing. Its not as if there are any enemy encounters, skill checks, or sanity rolls to contend with; having the appropriate level of skill in something merely changes a bit of the dialogue or one of the already unbelievably straightforward puzzles. As an Egyptologist youll be able to recognize many of the ancient deities names that come up in conversation and a few of the artifacts, while a mystically inclined character will realize their occult significance instead  but it doesnt make a shred of difference because one of the NPCs will be quick to supply you with all the necessary information you cant figure out anyway.

As for the puzzles, if you had the foresight (haha) to concentrate on raising Clairvoyance, youll receive a premonition telling you right out where to go next rather than having to conjure up spirits of the dead for fun and profit  a process which apparently entails placing three different bags of powder into a lit brazier. Forgot to pack the Seal of Solomon or any spells of warding to protect you from a malevolent efreet? Then youll be forced to instead click on a jar of magic powder located in the very same room that its needed in. Quest for Glory its not. 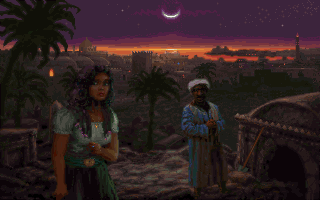 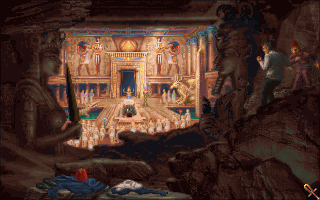 Sadly the only thing that is difficult consists of wrestling with its ridiculous interface, pretty much the kiss of death in the graphic adventure genre. Running the mouse over one of the  tiny  hotspots causes the already ankh-shaped cursor to change into a multitude of different icons depending on what specific action youre able to take, and yet offers no such indication when youre trying to drag an inventory item onto it. I actually spent a good ten minutes simply attempting to give someone a banknote because it was impossible to determine the correct location. You may also note that every room allows you to closely admire the plush carpeting below  because if you ever want to examine, manipulate, or use an item youre actually expected to remove it from your inventory, drop it on the floor, and then click on it for a closer view. And not only are the menus for saving and loading illogically difficult to find, the few hazards that ultimately prove fatal seem to randomly choose between teleporting you backwards in time or causing the entire program to lock up. Im tempted to label this the most awkward point & click engine ever to crawl into the light of day, but Ive played Curse of Enchantia.

But even assuming a single playthrough didnt end up feeling like more than enough, theres not much point in starting over again with a different character. Half of the archetypes are blatant retreads; the streetwise detective and aristocratic sleuth may require totally different specialties according to the generation screen, but in practice youd be hard-pressed to find much deviation between them. There are really only two main story branches anyway: a rational, no-nonsense character will conduct their investigations accompanied by the local police captain and wont encounter much of the supernatural, while occultists will pair up with a shady sorceress instead. This changes a few of the scenarios and makes for a handful of slightly different endgames, but for the most part it merely alters which allys sprite is displayed on the screen as you progress through the same areas in the same order. Perhaps if someone had spent more time hammering out the adventure aspect of things instead of thinking up all sorts of illusionary role-playing options at the beginning the result wouldnt be such a complete, not to mention completely obvious waste of potential. 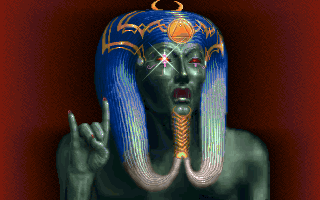 Speaking of which, Nyarlathotep (the Black Pharaoh, the Crawling Chaos, etc) puts in a brief appearance but doesnt do a whole lot other than spiriting you away for a brief (unseen) vacation through the outer planes, and the ending is a total letdown considering the subject matter. Call me a traditionalist, but if everyone involved isnt scattered about the room in pieces or gibbering away in some labyrinthine asylum, it just isnt cosmic horror. Man, it would be totally awesome if a company like BioWare Black Isle Obsidian released a true Chaosium-inspired CRPG based on something like Horror on the Orient Express or the epic Masks of Nyarlathotep, but alas, the stars are not right. And as adventure games go this is certainly an Old One, but doesnt come even close to being Great.

If you enjoyed this Daughter of Serpents review, you're encouraged to discuss it with the author and with other members of the site's community. If you don't already have an HonestGamers account, you can sign up for one in a snap. Thank you for reading!

© 1998-2021 HonestGamers
None of the material contained within this site may be reproduced in any conceivable fashion without permission from the author(s) of said material. This site is not sponsored or endorsed by Nintendo, Sega, Sony, Microsoft, or any other such party. Daughter of Serpents is a registered trademark of its copyright holder. This site makes no claim to Daughter of Serpents, its characters, screenshots, artwork, music, or any intellectual property contained within. Opinions expressed on this site do not necessarily represent the opinion of site staff or sponsors. Staff and freelance reviews are typically written based on time spent with a retail review copy or review key for the game that is provided by its publisher.