Heres the problem Im facing. Im five episodes into a six episode game. Each episode is very similar to the last and Im running out of ways to say Sam & Max: Episode [insert number here] is a fun game but it can be completed in one sitting quite comfortably. The other problem I seem to have is that were talking about the penultimate episode here; if youve been playing these games from the beginning, youre invested enough to play Reality 2.0 regardless of what I say. If youre not, youre probably not interested (and reading this because you relentlessly track down my writing) or are waiting for the entire season to be released until you make the purchase.

With that said, Sam & Max  Episode 5: Reality 2.0 actually is a fun game that can be completed in one sitting. Like all the episodes so far, the puzzles remain easy to work through without too much difficulty and the life of the party is the crazy situations and witty banter that the two leads will spew. Aided by the continuation of some tight voice acting that really brings the cast to life, Telltale take a break from lampooning pop culture, the stagnation of popular media and politics to take a new dig at the Internet. 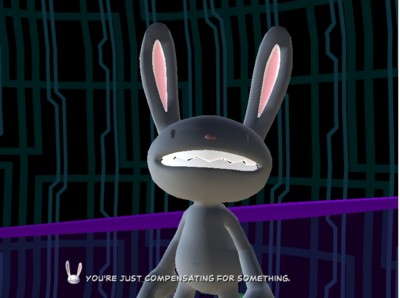 But before that, you explore the same street as youve explored four times before. You visit ex-tattooist Sybil, who has a brand new job that shes initially excited about that you can somehow use to your advantage. And you drop in to the Inconvenience Store and visit Bosco, whos dropped his English/French/Russian accent to adopt a ye olde Elven tongue instead. Bosco wants a huge sum of money for a impressive-sounding weapon of sorts that will undoubtedly turn out for be something mundane under a misleading moniker. Again. Its only after youve spent time in both locations that you can solve the simple problem of halting Sybils virtual reality beta testing.

The poor girl seems to trapped in some form of virtual World of Warcraft as she swings invisible swords and chants spells of smiting +1, and its the very world you eventually free her from that boasts the best stages of Episode 5. After obtaining goggles of your own from a disgruntled committee of obsolete computing equipment (including an automatic telephone and volatile 1980s arcade cabinet) you can swap the humdrum backdrop of the same recycled locations used for the previous four episodes and slip into the neo-tinted reality 2.0: a Tron-inspired mock-up of key stages like Boscos store, Sams office and Leftys abandoned tool hire store that the disgruntled hardware have taken up as their own. 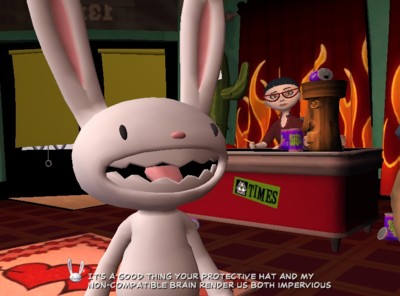 And then find some way to destroy it from the inside-out before it turns the population into chip-headed zombies.

For within the oppressive folds of the World Wide Web, the comedic script, which has grown stronger which each progressive episode, thrives. Here, shots are freely taken at Super Mario Bros>, the Zelda franchise and the ills of online advertising. Pop up ads sit on street corners, Dragon Warrior-esque Blue Slimes drip from squishy machines and battle is done via a turn-based menu-driven interface. 2D is revised; text-based adventuring is revisited and the computer geek in all of us is supplied with a constant stream of visual gags and media references that we all know were nerdy enough to grasp.

If Abe Lincoln Must Die was the start of Telltale taking action on their audiences feedback, Reality 2.0 is the continuation of this healthy practise. Little quirks throughout like the never-changing billboard atop Sybils store finally sporting a change (in this case, a 'cancelled due to lack of interest' notice) and a joke being made on the fact that the same calendar month had been used through the first four episodes show that Telltale are staring to truly nail the episodic nature of their series. I appreciated the little touches strewn throughout Episode 5 just as much as I did the clever parodying of a media I spend a lot of time immersed in, and so will anyone else following the series already. If youre not, well, thanks for reading  maybe its about time you jumped in. The conclusion of this series looks to be its strongest point.

If you enjoyed this Sam & Max Episode 5 - Reality 2.0 review, you're encouraged to discuss it with the author and with other members of the site's community. If you don't already have an HonestGamers account, you can sign up for one in a snap. Thank you for reading!

© 1998-2021 HonestGamers
None of the material contained within this site may be reproduced in any conceivable fashion without permission from the author(s) of said material. This site is not sponsored or endorsed by Nintendo, Sega, Sony, Microsoft, or any other such party. Sam & Max Episode 5 - Reality 2.0 is a registered trademark of its copyright holder. This site makes no claim to Sam & Max Episode 5 - Reality 2.0, its characters, screenshots, artwork, music, or any intellectual property contained within. Opinions expressed on this site do not necessarily represent the opinion of site staff or sponsors. Staff and freelance reviews are typically written based on time spent with a retail review copy or review key for the game that is provided by its publisher.