Hey, someone got game in my porn!

You might think you know all about this type of game, in which case youre probably some sort of perverted weirdo, but Gals Panic 4 is actually a big, bouncy departure for the series  and definitely for the better.

The first thing youre going to notice is that the sordid adult themes of the previous games and their even smuttier clones have been tossed to the curb like a dead hooker. Instead of exposing digitized photos of skanky women exposing themselves, now youll be peeking at cute, colorful sketches of fully-clothed anime girls going tee hee. And while most of these frigid fillies are your standard Japanimation archetypes  the clumsy nurse, the athletic tomboy, the haughty rich woman with the annoying laugh  in an amazing show of restraint Kaneko left everything good clean fun instead of taking a hard cock right down to Hentai City!

Some of these commonly encountered visual themes include dressing up in a yukata to watch fireworks and eat watermelon (which is an honorable Japanese tradition) and skiing through a hail of tiny snowmen while Christmas music jingles merrily in the background (which is probably not  until now). 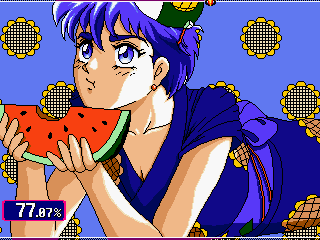 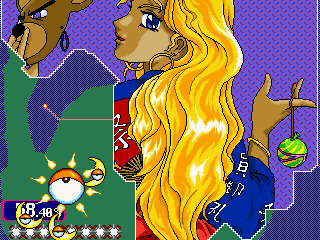 But the second thing youre going to notice is that the previously putrid gameplay has been similarly excised in favor of something thats actually fun to play, which was a pretty clever attempt at concealing this shocking absence of nipples. The playing area is now so massive that the screen scrolls in both directions to display it all, putting an end to the earlier games excruciating habit of constantly swamping you with hordes of enemies once the picture was halfway finished, and since the good/evil meter has been dropped completely, youre now free to reveal as much of it as you can at a time.

And with all that extra space youll be pitted against huge scaling bosses of Mode7 proportions in addition to the usual assortment of insects, robots, and miscellaneous freaks. Theyre also packing special attacks that youll be warned about immediately beforehand, giving you a brief chance to hunker down before getting blasted with flamethrowers, chased by homing lasers, or merely watching the boss itself tear through the picture to cover patches of it back up again. Fortunately this is also the only game in the series that actually lets you fight back instead of just taking it like a hentai heroine. Revealing chunks of the picture lets you store away your own attacks that quickly take out any nearby enemies but can also be chained to slow or even freeze the boss, ultimately wiping virtually everything off the screen for a short period of time. 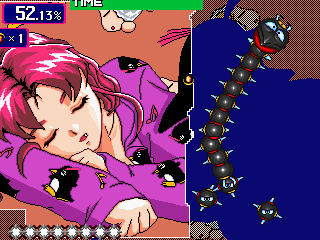 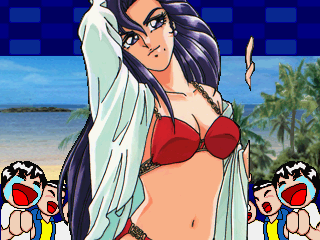 Actually completing each level still requires you to reveal at least 80% of the picture, a task made considerably easier thanks to this newfound ability, but your true goal is to isolate the boss into a corner without any of the glowing silhouette and manage to snag a perfect 100% for the super-secret bonus SHOWTIME! image, which does require a decent amount of quick-thinking strategy. Of course even these bonus pinups are completely lacking in naughtiness, showcasing the girls in nothing more scandalous than bikinis, which must have come as a tremendous blow to their established audience of lecherous nerds. 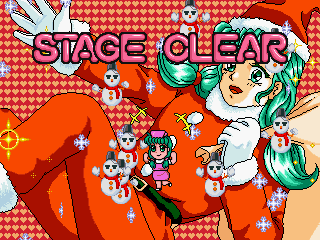 Realizing the depths of their grievous error, Kanekos subsequent efforts retain the anime-themed graphics, but ditch the attack button and once again focus on subjects of Japanese cultural significance: kawaii schoolgirls slowly peeling off their sailor suits, leather-clad S&M queens licking themselves, and buff, brotherly bodybuilders putting each other in headlocks. But for briefly concentrating on solid gameplay and appealing visuals instead of the usual creepy filth, I hereby award Gals Panic 4 the prestigious title of Least Offensive of Show.

If you enjoyed this Gals Panic 4 review, you're encouraged to discuss it with the author and with other members of the site's community. If you don't already have an HonestGamers account, you can sign up for one in a snap. Thank you for reading!

© 1998-2021 HonestGamers
None of the material contained within this site may be reproduced in any conceivable fashion without permission from the author(s) of said material. This site is not sponsored or endorsed by Nintendo, Sega, Sony, Microsoft, or any other such party. Gals Panic 4 is a registered trademark of its copyright holder. This site makes no claim to Gals Panic 4, its characters, screenshots, artwork, music, or any intellectual property contained within. Opinions expressed on this site do not necessarily represent the opinion of site staff or sponsors. Staff and freelance reviews are typically written based on time spent with a retail review copy or review key for the game that is provided by its publisher.