Genestealers are the forgotten race of Warhammer 40K.

Eventually uncovered as elite front-line warriors and advanced planetary scouts for the Tyranid army, these multi-limbed creatures have long been a threat to sentient life everywhere. Originally from the jungle moon, Ymgrarl, genestealers sport six limbs; the lower set are two stout legs that support an exoskeleton-covered hunched-over torso with a spiky spinal column running down the centre. From the gaunt sides sprout the final two sets of limbs; one pair of viscous claws that are powerful enough to shred through anything they attack and another set of arms that tend to differ with each individual drone. They also differ depending on which species is unfortunate enough to fall victim to the their unique method of reproduction.

Using their flashing yellow eyes to hypnotise a victim, this asexual race then employ a chameleon-like tongue to deposit their genetic material within. The victim will wake several hours later with no memory of the event or any injuries to suggest an assault and continue on with their lives. Until the larva is old enough to burst from their chest and devour their corpse. These tactics are used to slowly plant a solid foundation of genestealer warriors on any prospective planets the Tyranid hive-mind wishes to invade, giving them a pre-built strike-force already established in their targets society.

They travel in abandoned, derelict ships constructed by long-dead races or forgotten civilisations known as space hulks. These dilapidated crafts slip randomly in and out of warp without warning, sending hoards of genestealers to all corners of the universe. Because the nature of these crafts are unknown, theyre highly sought over, prospective salvagers interested in obtaining technology from a long forgotten advanced age or new advancements from unknown alien races. Space Marines often view these hulks greedily; wanting not only to claim anything inside, but wishing to take on the animalistic inhabitants within to battle-harden their ranks. 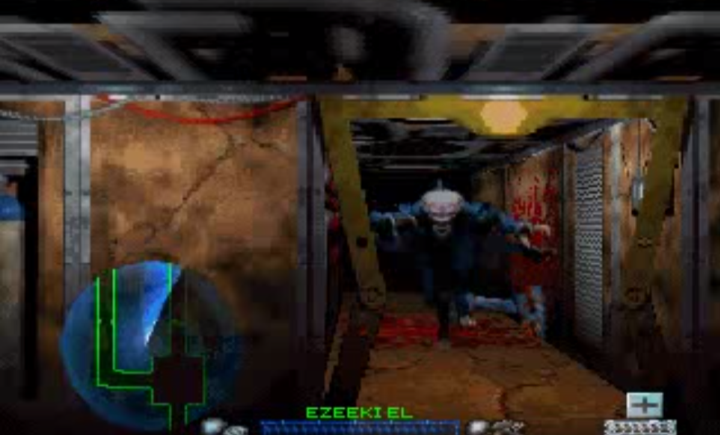 Genestealers are not gracious hosts. Not only will trespassers have to worry about the hulk slipping back into warp without any warning, theyll find that the aliens inside will swarm in huge numbers. Theyll herd them into dead ends, flooding them with superior forces; theyll emerge from rusted holes in rotting ceilings or surge out of long forgotten air-vents. Theyll maim, slice, gut and impregnate for kicks and giggles.

The Blood Angels, a prominent Space Marine chapter, send in Terminators to counter-act them, mammoth suits of armour with heavy weaponry tacked on. It evens the odds out a little.

The original Space Hulk gave PC gamers a chance to tread rotting ships hulls via a tactical interface that explored narrow corridors by assigning troops locations. Three years later, the concept was updated into Space Hulk: Vengeance of the Blood Angels. Whereas things are still tactical, the remake also gives you the chance to jump into the boots of any of the marines under your command and play the game like an FPS. 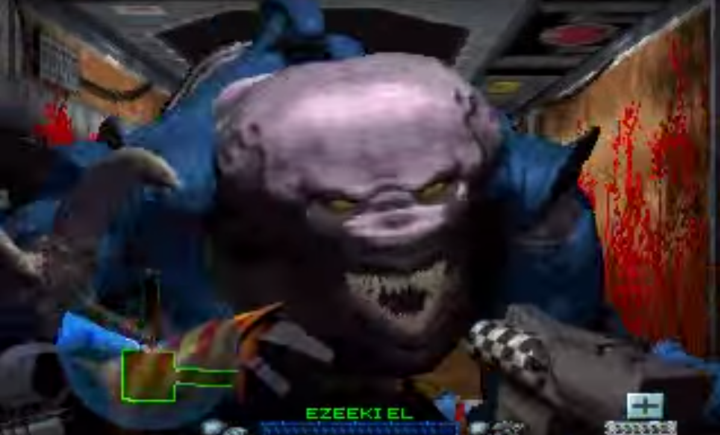 A slow, lumbering FPS, but an FPS all the same.

But Vengeance of the Blood Angels is best viewed as a strategy that can be seen through a first-person view. If you try and treat it like a Doom clone, youll be quickly frustrated with the shoddy frame-rate, the lumbering slowness and the inaccuracy of the Terminator's bolt guns -- which is exactly what the opening stages of the game force you into! Your platoon of Blood Angel Terminators enters the decaying interior of a hulk through a forced hole in the hull and is quickly ordered to take up defensive positions. At this early juncture, you're a lowly recruit in your unit and are issued orders that you need to follow. These early levels act like a tutorial, but at the same time offer you enough threat to keep you on edge.

Coordinates are displayed on your HUD radar that your commanding officers want you to deploy to, and all that stands in your way is several swarms of multi-limbed psychopaths. Once you reach your ordered location, youre likely to then defend it for a set time until you're called to reinforce other corridors or move to strike at unwary genestealers nearby. You stomp across these levels, running though visibly rusting corridors, dilapidated engine rooms and dusty libraries(?) with the ringing screams of your comrades echoing over your intercom. They howl in pain and offer curses in god-awful voice acting (This one is for [seven second pause while the name is selected and loaded into the quote] Ezekiel!) While these sections are tense and keep you on tenterhooks, they also drag. As you would expect from the Terminator's bulky armour (and keeping within the short move range the Warhammer board game limits them to) theyre not the swiftest of units. 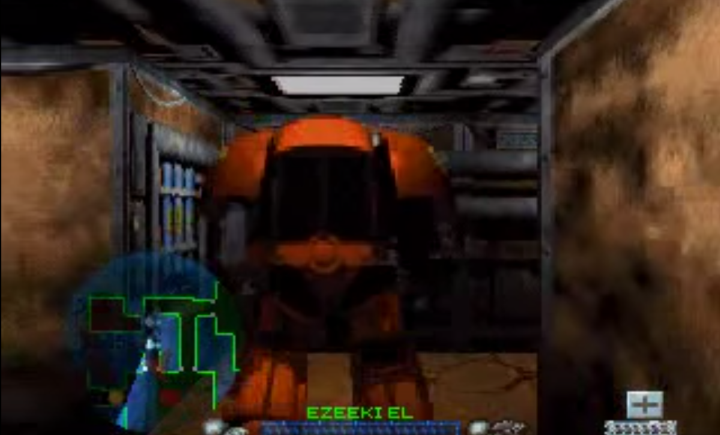 Its only after completing a few stages that your superiors get routinely bumped off and you're given numerous, swift field promotions until you're in full command of the squads. Its then up to you to place your Terminators in the best strategic positions to nullify threats and reach that missions objective. Along the way, youll find specialists boasting heavy weapons including Assault Cannons and Flamers among your ranks. These lay waste to anything in their path but use their resources alarmingly quick forcing them to be used sparingly. An Assault Cannon is perfect for ripping flocks of stealers to shreds, while a blast of napalm from the Flamer will set an entire corridor alight, stopping your foes from using it until the flames subdue. Throwing these units in where a normal bolt-rifle wielding Marine would do just as fine is nothing short of a waste and theyll each become useless once the ammo runs dry.

Its when you exert this control that the game takes off. No longer stuck with the trudging speed the FPS sections throw at you, you instead can play the game like a pure strategy. Blocking out hive holes with high numbers or huge weapons, advancing on mission objectives from multiple angles, crushing anything that stands in your way  this is where Vengeance of the Blood Angels shines. The campaign mode throws challenge after challenge at you until you finally make you way into the hulks control room, past the drones and weapon-using hybrids to do battle with the grotesque patriarch of the genestealer hive. Even when this is all finished with, you're offered virtual training missions taken from the expansive Warhammer 40K history and set pieces lifted right from the board game and subsequent PC prequel.

If you play Space Hulk: Vengeance of the Blood Angels as a foot solider, youre going to be disappointed. Despite the efforts made to give the game an FPS feel, its less a relished experience and more a necessity that must be endured. Play the game like a general; command your troops into place; out think the primal beasts that run the claustrophobic corridors; let your strategies talk louder than your guns. Otherwise get used to hearing your comrades death rattle over your intercom and shuffling slowly off in a fruitless attempt to avenge them. And, more sadly, miss the entire point of a unique and entirely enjoyable game.

If you enjoyed this Space Hulk: Vengeance of the Blood Angels review, you're encouraged to discuss it with the author and with other members of the site's community. If you don't already have an HonestGamers account, you can sign up for one in a snap. Thank you for reading!

© 1998-2021 HonestGamers
None of the material contained within this site may be reproduced in any conceivable fashion without permission from the author(s) of said material. This site is not sponsored or endorsed by Nintendo, Sega, Sony, Microsoft, or any other such party. Space Hulk: Vengeance of the Blood Angels is a registered trademark of its copyright holder. This site makes no claim to Space Hulk: Vengeance of the Blood Angels, its characters, screenshots, artwork, music, or any intellectual property contained within. Opinions expressed on this site do not necessarily represent the opinion of site staff or sponsors. Staff and freelance reviews are typically written based on time spent with a retail review copy or review key for the game that is provided by its publisher.