Darts info: Darts is a game popularised by public houses and is played with a segmented cork board split into twenty different score zones numbering 1-20. Each of these segments contains areas that can cause their respective score to double or triple. A prospective player has three darts a turn to throw at the board in an attempt to rack up a higher score than their opponent.

How does one review a video game based on Darts?

It's a question I never really thought I'd be asking myself, but cunning developers, Mere Mortals, conspired against me to pose it anyway. It's also a game I never thought I'd find myself enjoying, but the clever bastards proved me wrong on that front, too.

The conclusion gets stressed early today: PDC World Championship Darts can be a lot of fun, especially when you're playing the highly enjoyable multiplayer offerings. Such pub-friendly dart games like around the world, killer and fives make an appearance as well as customisable legs and sets of 501 (or, should you prefer, 301 or 701). Playing these against the computer can be both fun and intense. Playing these against a friend can whittle an evening away before you know it 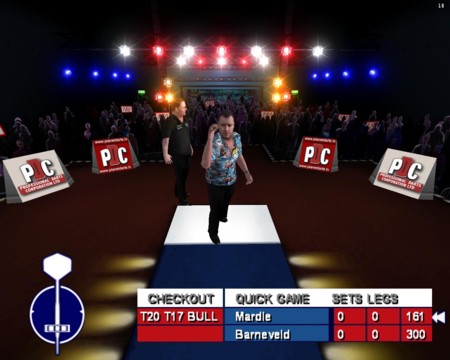 Darts info: A game of 501 starts with both players on a score of 501 which they need to whittle down to zero to win. The last dart of the winning player must land on a double, which is the small top-most section of each score zone on the dartboard.

Hurling your darts accurately is easy to learn but tricky to master: you move a crosshair around the dartboard to select you desired target then use a PGA Golf-like method to hurl the javelin by easing back the analogue stick and then flicking it back forward. This replicates the action of a dart's players arm and needs steady guidance to successfully achieve. The amateur version offers a power bar youll need to stay within while the pro version forces you to rely on the actions made by your dart players arm and the sensitivity of you thumb to gage the throw correctly. Whats been done here is take an interactive media thats been attempted and failed at in the past and a new spin applied to it.

Whatever difficulty you play it on little touches like an ambient heartbeat playing in the background and the inclusion nervous little shake in your aim always crop up when youre faced with a high-pressure shot. Moments like sinking the last dart in the triple-20 for the top score of 180 or when a three-drat check-out opportunity present itself make your player more likely to make an error and giving an ailing opponent a second chance to get back in the game.

Creditability has been lent by bringing in a host of pro players to go up against (such as Phil Taylor, Dennis Preistly and Ramond van Barneveld) and using recognized commentator, Sid Waddell and scorer Russ voice of Bullseye Bray. Waddells inclusion is certainly a coup for the niche fan-base WCD is clearly aiming for, but his in-game quotes are sadly limited in number and a large amount of repetition is to be expected. Its also worth noting that a few other shortcuts crop up the further you stray away from the multi-player mode. The touted Character Editor mode is disappointingly neutered, giving you a random player build (who looks all the world like WWF 80s premier heel, Ted DiBiase) and letting you change his name and shirt rather than give you the chance to build you own avatar. Likewise, the computer AI seems to be blanketed over the entire 10-man cast, letting them all prone to the same mistakes and miraculous comebacks regardless of whom they are or the level their real-life counterparts exist in. The game is simply oodles more fun when the opponent is sitting next to you, all set to be mocked for their misses and be jabbed in the ribs on key shots should they dare take the lead. ....its been long established that Im a very sore loser.

So its lucky that Im competent at PDC World Championship Darts, as it quickly found a home in my party-play game library and stuck there. If you belong in the niche market that follows, or has been swept up in the rising popularity of, the sport then here youll find the snuggest videogame adaptation of darts to date. My initial question was a query on how one reviews a darts game and the answer is like any other one when the production values and aims of the title have been squarely aimed at providing not a quick, cheap mock-up but a significantly superior interface and application to the numerous lazy efforts offered up in the past. It has flaws and, by its very nature, its a genre that will turn many people away. But those who thirst for virtual darts or a new avenue in which to ply their multi-playing shenanigans need look no further.
3.5/5

If you enjoyed this PDC World Championship Darts review, you're encouraged to discuss it with the author and with other members of the site's community. If you don't already have an HonestGamers account, you can sign up for one in a snap. Thank you for reading!

© 1998-2021 HonestGamers
None of the material contained within this site may be reproduced in any conceivable fashion without permission from the author(s) of said material. This site is not sponsored or endorsed by Nintendo, Sega, Sony, Microsoft, or any other such party. PDC World Championship Darts is a registered trademark of its copyright holder. This site makes no claim to PDC World Championship Darts, its characters, screenshots, artwork, music, or any intellectual property contained within. Opinions expressed on this site do not necessarily represent the opinion of site staff or sponsors. Staff and freelance reviews are typically written based on time spent with a retail review copy or review key for the game that is provided by its publisher.