The Mark is a bad game. Its important to get that out of the way early. Its a relic of an age that, as a media, video games moved on from long ago; this dinosaur exhibits poor, blocky graphics that would put the original Time Crisis to shame, a clichéd plot that fails to capture any interest and some of the worst voice acting to befall the digital revolution since a tubby beardo declared someone the Master of Unlocking! Everything The Mark sets out to do fails.

The plot might very well be the highlight of the package, as depressing as that is in hindsight. It takes on the role of a typically more pressing problem than most FPSs centre around, that being cursed terrorists. In this case, the crazy fools hatch an ill-conceived plot to make London a radioactive wasteland via a salvo of illegally acquired nuclear missiles and have even roped in an angry Russian billionaire to lend them a freight ship in which to lug their explosive cargo about and serve as a launch pad. For no explained reason, there is only one person on the planet that can save Englands merry capital from such wanton destruction, nondescript US marine Steve Fletcher. Despite being billed as a one-man-army, hes joined on his travels by ex-SAS officer turned mercenary, Austin Hawke, who is hired to protect Fletcher on his mission to stop the launch.

Steve Fletcher, ladies and gentleman. A man so unstoppable he requires a bodyguard.

The Mark allows you to cycle through the games twin leads, letting you see how things unfold through slightly differing perspectives, and even gives both soldiers special skills to try and set them apart. Fletcher can execute a clumsy Bullet-time rip-off to avoid incoming fire whilst Hawke can magically turn the screen a lovely shade of urine and spot any targets that might be hiding behind cover. 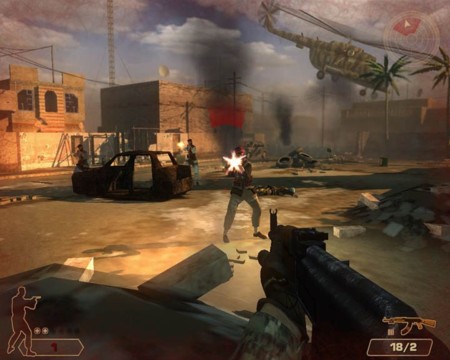 Luckily, the terrorists are allergic to cover.

Not that the terrorists will use cover much; they much prefer to stand in the open beneath big neon arrows adorned with Shoot Me! in flashing electric pink. And so, you shoot them, as peace-keepers are wont to do, either mowing them down with Fletchers assault-rifle or blasting them with Hawkes shotgun and watching them tumble bonelessly to the floor. Should you ever get over the flat storyline or the questionable AI, theres always the non-existent physics to moan at. The events are also rigidly scripted; militias of enemy troops appear from nowhere as you manoeuvre yourself into the right place to trigger them. Youll not be able to do things like lob a grenade into an occupied hut because until you step through the doors, the troops within dont actually exist.

As bad as the enemy AI is, your computer-controlled ally is just as bad. Lets say youve taken shelter to reload your firearm while bearded terrorists with bombs strapped to their chests stand out in the open, firing blindly. Before you're able to finish slipping a new mag into your gun, your chum shuffles for a position next to you, nudging you firmly out of safety and into the slew of incoming bullets. They also like to stand right in front of you, blocking your shots or running madly into the enemys ranks but dealing no significant damage themselves. Its only you that feels the after-effects of their foolhardy actions, though; theyre invincible. 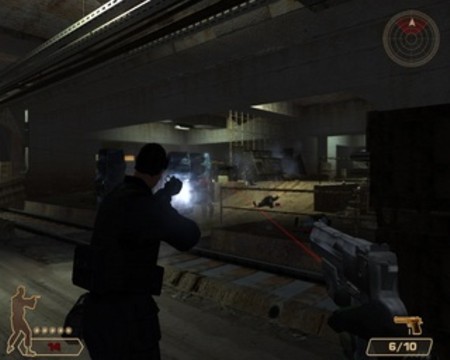 Get out of the bloody way, shadowy-figure-who-I-assume-is-my-ally!

And so you and your bullet-proof sidekick will plough on, doing nothing more than shooting static targets who only ever present any real threat when your incompetent partner lends them an unwilling hand. Even with these flaws in mind, still more pop up as the game goes by. In the rare cases an enemy will move, theyll either run into  or sometimes straight through  walls and obstacles; every time you die youll be sent all the way back to the start-up screen to load in your last save point; the jump mechanics make it feel like youve sprouted wings and are treading air. The audio, the graphics, the gameplay: none of it measures up. Textures flicker, shadows erratically shift about the screen for no reason whatsoever. The voice actors dont just sound bad, they sound bored. I dont blame them; I know I was bored.

The Mark is a bad game. I got that out of the way early. I wish I was a pre-warned as you have now been.

If you enjoyed this The Mark review, you're encouraged to discuss it with the author and with other members of the site's community. If you don't already have an HonestGamers account, you can sign up for one in a snap. Thank you for reading!

© 1998-2021 HonestGamers
None of the material contained within this site may be reproduced in any conceivable fashion without permission from the author(s) of said material. This site is not sponsored or endorsed by Nintendo, Sega, Sony, Microsoft, or any other such party. The Mark is a registered trademark of its copyright holder. This site makes no claim to The Mark, its characters, screenshots, artwork, music, or any intellectual property contained within. Opinions expressed on this site do not necessarily represent the opinion of site staff or sponsors. Staff and freelance reviews are typically written based on time spent with a retail review copy or review key for the game that is provided by its publisher.