Deus Ex presents a world administered by a totalitarian government that no longer tries to hide its ubiquitous reach into all avenues of civilised life. Bordered by never-ending skyscrapers that cloud the world in a sunlight-choked gloom, the rich get richer while the poor etch out a miserable existence between power-mad conglomerates and broken politicians. Gangs wage war on the streets, battling endlessly for scraps of abandoned industrial estates or ruined homes whilst terrorist organisations enjoy free roam beneath the prosperous cities dominated by wage-slaves and executives. The heavy thumping of an automated robot's footsteps reverberate in dead alleyways, a grim reminder of the price a broken curfew will pay. And the grey plague sweeps across the populace with a fury: a new disease that holds no prejudice in who it infects. For those with the right funds and connections, a cure is only a considerable sum of money away. Those who can't pay rot on the streets where they fall.

Peace is not easily kept in the world that Deus Ex presents. The police are as corrupt as the senators assigned to oversee them and the only thing that talks on the streets is the harsh retort of a loaded firearm. The NSF, an anti-establishment terrorist organisation, grows bolder by the day, sabotaging civil buildings and landmarks, attempting to dispel the positive dogma spun by the governing power and underwrite their authority. Ruthless and destructive, their ever-swelling ranks encompass a stirring unrest in the lower order, one quickly camouflaged from the world with a sturdy veneer of propaganda. They are to be dealt with.

Initially, J.C Denton is eager to put them in their place. UNATCO's newest breed of agent is thrown headfirst into the war on terror as soon as he steps out of his training academy. Ordered to Liberty Island to quash a rebellious coup staged on the Statue of Liberty, he's transported to some rickety docks, given an untidy briefing and sent out on the battlefield. Objectives are loosely supplied, but how they are completed is left entirely up to you. 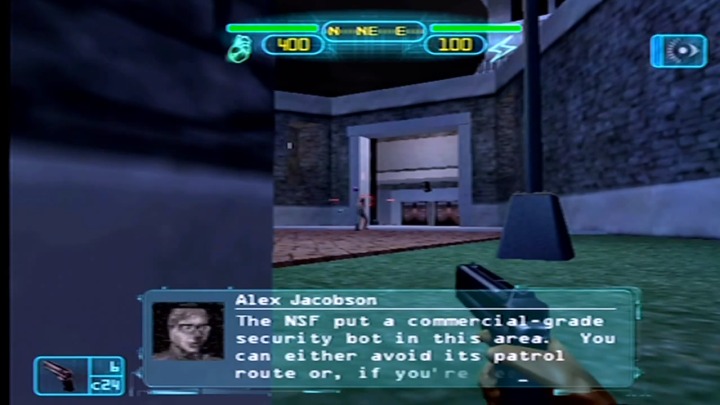 Before you get the chance to slip around the scaffold-framed landmark, you're given the opportunity to invest in various skills to aid J.C in his mission. Choose to top up his competency in various firearms to give him true target-dropping powers. Low level gunslingers will see their marksmanship suffer while well-trained agents effortlessly execute flawless head shots with a steady aim from considerable distances. Enrich your computer training and find J.C capable of slicing security systems, while advancing his skill with consumable items lets him use less lock picks to break open doors or fewer multi-tools to disable electronic keypads. He can be made into a medic, an Olympic-strength swimmer, an expert on ballistic and hazard-shielding armours and a whole host of other selectable talents. Whatever skills you opt to adopt make a lasting impression on how Deus Ex is experienced.

The liberating freedom of the game doesn't stop at the heavy customisation of your new age warrior; it also boasts a plethora of decisions. That innocent guard that stands between you and the Hong Kong docks can be easily felled with but a few bullets to the head before he even knows youre there, leaving you free to root through his pockets and steal his ammo. Alternatively, you could make small-talk before whacking him upside the head with your stun baton or hurl a random piece of trash and sneak past him while he investigates the noise. You can even draw a few nearby gang members doing a shady drug deal into a running gun-fight, prompting the guard to spring into action and leave his post unsupervised. The varied choices that Deus Ex continuously presents you adds a second durable layer of strength on top of an already durable world. What can you do to bring an artificial world to life more convincingly than provide a sense of openness and freedom as opposed to the checklist of activities you need to complete to stroll through the majority of more linear games in the market?

This grimy cyberpunk world thrives. Ignore the outdated, blocky graphics and watch the flies swarm around the dead body of that pimp you offed a while back to save his girls from another beating. Dump his body behind the trash cans of the sordid club nearby and wander in to be accosted by nosey tabloid paparazzi and scared citizens startled by the sound of gunfire. Sit at the bar and order a few drinks until the alcohol kicks in and unwanted attention doesnt matter or frag the source of all the noise with a well-placed rocket or two. Do this and some of the clientele will reach for guns and pepper you with bullets, some will try and inform the local authorities of the madman in a long leather coat and shades shooting up the place and some will run screaming. You know you have something special when the NPCs that usually serve as nothing bigger than backdrops all contain the ability to react differently depending on the situations theyre placed in. 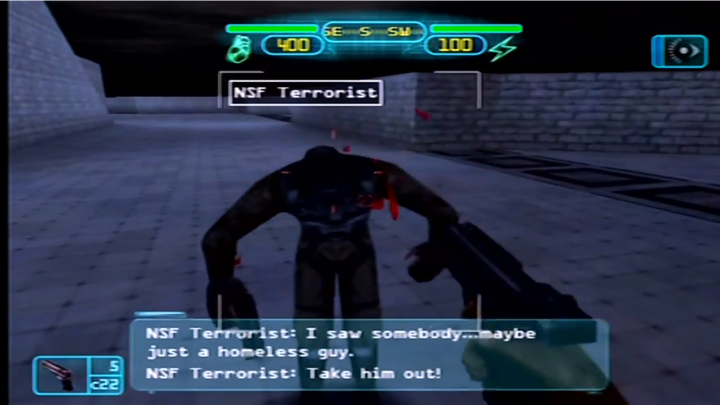 As do the forces you are put up against. The terrorists that guard the Statue of Liberty youre asked to liberate in the first mission patrol the area loosely, pacing around the open grounds littered with rusting metal containers and dilapidated scaffolding, but are prone to panicking when the going gets tough. The perimeter theyve set up around the famous landmark can be easily broken by a bit of sharp-shooting or by using the metallic storage boxes as cover to sneak around. Your foes here are not well trained; keep the noise down, stick to the shadows and youll get close enough to hear the guards chat casually about their mission and their goal. End the comfy exchange with a knife to the back or keep low and carry on undetected.

It wont be long until the stakes are raised, though. Infiltrate an enemy airfield to silence a terrorist sponsor that has landed his private jet there, darting through a complex network of security cameras that trigger an alert should they spot you, sending a veritable militia of highly-trained armed guards rocketing to your location. Watchtowers loom in the corners, security offices set inside guarded by shotgun-packing troops in body armour while snipers line the rooftops. Around the rotting wooden cargo crates patrol metallic sentry drones armed with twin mini-guns that effortlessly mow down unprepared agents. Avoid the cameras and plant trigger-responsive explosives into their paths to dispose of them, lob an EMP grenade into their path to fry their circuitry or hack the security offices, either turning them off or setting them against their former allies. 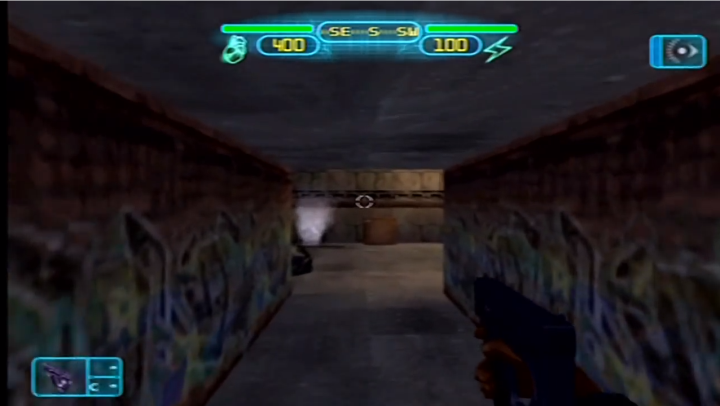 Its not just you and a gun against the masses, either. Alongside your set skills such as firearms training and close-combat specialising that you level up as you progress, you can also augment J.C upon obtaining nanomachine-based technology that upgrade his abilities or grant him extra ones. You can choose to upgrade his cybernetic legs to either allow him an inhuman leaping distance, helping him reach those hard-to-reach snipe spots or evade danger, or make his steps quieter, letting you bypass guards and sentries with much more ease. There are numerous augments for you to invest in, each choice helping you define the agent you control. His eyes can either become stand-alone targeting systems that improve your aim or will be able to see in extreme conditions; for each significant body part theres an upgrade and a choice to make. In Deus Ex, your avatar is truly yours to mould as you wish.

Mould him well, because the world is against you. Trust is a rare commodity, and within a world ripe with betrayal and conspiracy, you never know who will be next to turn their sights on you. Listen well to the advice of others but take note of the evidence viewed through your eyes as well as your ears. There are those that view J.C with undisguised interest, those that wish to recruit him or employ him as a puppet, and more still wholl only be happy once theyve put a bullet in his head. Watch an awe-inspiring story unfold around you, filled with a depth most games are scared to touch. But more than that, watch your ammo, watch your surroundings, and, most importantly, watch your back.

If you enjoyed this Deus Ex: The Conspiracy review, you're encouraged to discuss it with the author and with other members of the site's community. If you don't already have an HonestGamers account, you can sign up for one in a snap. Thank you for reading!

© 1998-2021 HonestGamers
None of the material contained within this site may be reproduced in any conceivable fashion without permission from the author(s) of said material. This site is not sponsored or endorsed by Nintendo, Sega, Sony, Microsoft, or any other such party. Deus Ex: The Conspiracy is a registered trademark of its copyright holder. This site makes no claim to Deus Ex: The Conspiracy, its characters, screenshots, artwork, music, or any intellectual property contained within. Opinions expressed on this site do not necessarily represent the opinion of site staff or sponsors. Staff and freelance reviews are typically written based on time spent with a retail review copy or review key for the game that is provided by its publisher.