Congested nightmare, den of corruption, toxic wasteland of desperate living and urban decay  private dick William Blade Hunters apartment isnt a pretty sight, and the post-apocalyptic city of L.A. surrounding it isnt much better. But while it may look like something pulled straight out of Blade Runner, Dynamixs Rise of the Dragon has more than enough of its own style to stand out from the hundred-plus graphic adventures released for the PC alone.

After the mayors daughter becomes the latest victim of a new drug that fatally mutates its users into twisted monstrosities, Blade reluctantly finds himself entangled with both the underworld Triads and an ancient Chinese prophecy proclaiming him the destined hero who either saves the world or gets torn into thousands of itty-bitty pieces by the Evil One. 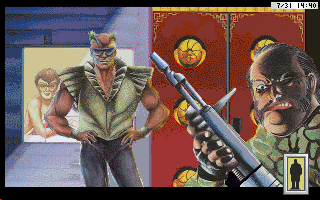 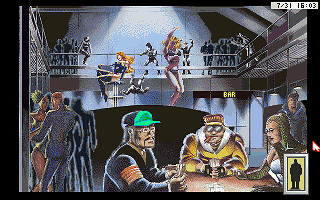 At least his cyberpunk-inspired world looks sweet enough to be worth saving. Well, maybe not his cramped apartment, what with its cruddy, dripping walls always shaking violently every time a helicopter cuts past right outside his window. And probably not the armored trooper from the LAPD (as well as The Running Man) whos normally just shouldering his assault rifle next to some homeless drunks at the subway unless our hero goes out without his clothes again. But hell definitely want to protect the local strip club, where the scantily clad dancers writhe away on stage and two brawlers try to fling each other from the scaffolding above, a place where you can grill the regulars for important information or just pick up a hooker. Better there than City Hall, where one might accidentally proposition a man and live in the fear of everyone starting to refer to you as SwitchBlade.

The really cool part about all this, however, is that a lot its actually optional as Dynamix included several alternate solutions. In most adventures doing something stupid like locking yourself out of the house would force you to start over, but this one will let you open a nearby steam valve to short out the doors electronic lock and sneak back inside. Or perhaps youll lose your trusty sidearm after checking it in with the friendly Pleasure Dome bouncers, which presents you with two more possible paths: figure out a way to buy them off beforehand or get your hands on a new piece later on. 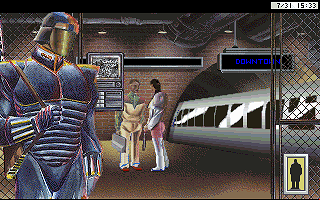 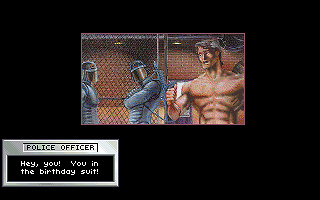 But keep those busy hands off the ladies, because two-timing your girlfriend is one of the few ways that you can stick yourself into an unwinnable situation. (At least she has the decency to suggest you reload a saved game if you know whats good for you.) Conversations with NPCs are no joke, either. Theyre handled with a tree of possible dialogue choices just like in LucasArts games  except that you have to say all the right things the first time in order to get what you want. Once again there may be multiple correct paths, but telling some uncooperative punk to go fuck himself, as much as you might like to, is just a waste of time.

And time is one thing you cant afford to lose, as you only have a few game days before disaster strikes the city. Not only is the clock always ticking, but significant portions of it are spent traveling to different locations depending on their distance. Besides the whole doom of humanity thing constantly looming overhead, youll also need to sleep when it gets too late, remember to keep any appointments, and if youre not careful, cool off in a holding cell until the next morning. Youll also need some way to stall maniacal villain Deng Hwangs operations if youre ever going to thwart his ultimate plans for the city. 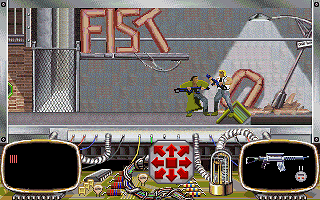 Fortunately the puzzles are fairly logical with the notable exception of a phone tap sequence that doesnt make your objective very clear and results in instant death the moment you do something incorrectly. Theres also a pair of side-scrolling arcade sequences at the end, which amazingly enough dont suck because you can find items to improve your chances of survival during the main game or just skip them entirely if you die too many times, something Sierra proper should have considered years earlier.

Rise of the Dragon isnt perfect, but if you consider yourself a fan of graphic adventures you should be ashamed of yourself for having overlooked this one for so long. And while its a shame that a company so closely associated with Sierra so rarely developed anything for the genre their parent made famous, they did use this same engine for another excellent entry, Heart of China.

If you enjoyed this Rise of the Dragon review, you're encouraged to discuss it with the author and with other members of the site's community. If you don't already have an HonestGamers account, you can sign up for one in a snap. Thank you for reading!

© 1998-2021 HonestGamers
None of the material contained within this site may be reproduced in any conceivable fashion without permission from the author(s) of said material. This site is not sponsored or endorsed by Nintendo, Sega, Sony, Microsoft, or any other such party. Rise of the Dragon is a registered trademark of its copyright holder. This site makes no claim to Rise of the Dragon, its characters, screenshots, artwork, music, or any intellectual property contained within. Opinions expressed on this site do not necessarily represent the opinion of site staff or sponsors. Staff and freelance reviews are typically written based on time spent with a retail review copy or review key for the game that is provided by its publisher.