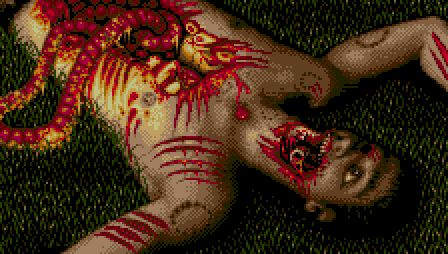 Waxworks is a 1st person, real-time dungeon crawl thats sure to provides hours of wholesome entertainment for the whole family  that is, if youre the Addams Family. Much lighter on the RPG side of things than stat-heavy fare like Eye of the Beholder, instead it focuses firmly on exploration, puzzle-solving, and buckets of grisly, explicit GORE.

Having inherited your newly deceased uncles demonic waxworks, you quickly discover that these grotesque displays are actually portals to specific points in history dramatically shaped by a 500 year old family curse. It seems that the birth of twins in your bloodline inevitably results in one of them becoming a twisted servant of Satan, with the other seemingly fated to unknowingly confront him. Hence its your destiny to enter these unholy realms, walk in the shoes of your goodly ancestors, and put things right  before your long-forgotten brother can unleash them upon the present.

Each of these exhibits looks and plays very differently, making for a unique experience every time you progress further into the game, but none of them shy away from scenes like a young woman whose bare chest has been sliced open to reveal her still-intact heart. Ruled over by a vampire, the medieval graveyard is crawling with hordes of ragged, flesh-eating zombies, offering an unlimited plague of easy random encounters in a game where all the others are fixed. The multi-tiered Egyptian pyramid, however, is an extremely long series of labyrinths that are much more geared towards overcoming numerous logic and inventory puzzles than crossing blades with the royal guard.

Should you choose to enter the Lovecraft-inspired abandoned mine, youll find your survival depends on cooperating with a previous team of scientists in order to stave off the hideously-deformed fungoid mutants that lurk there. A very limited supply of fuel allows you to easily destroy these horrors, but its also needed to remove the otherwise-fatal spores and vines that block your path. Victorian London, a city haunted by the ritual killings of Jack the Ripper, is perhaps the most unusual of all  it features no combat at all, instead forcing you have to navigate the immense maze of all-too similar streets and alleys while trying to keep out of sight from the police and angry torch-wielding mobs that will chase you down and promise instant death. 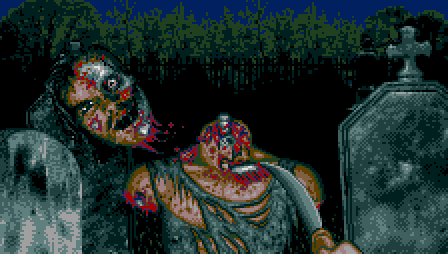 All this is accompanied by a very strong score if you have a Roland MT-32, ominously quiet or threatening and moody depending on the situation, and you can pair it up with a SoundBlaster for the digital sound effects. And not only are the macabre graphics impressively detailed, but theyre also very nicely animated whenever some horrific creature is trying to maim, cannibalize, or otherwise distress your person. While this is going on you can target different parts of your opponents anatomy, often to considerable effect  in order to kill a zombie you have to hack off both arms before finally sending its rotted head soaring into the air. Naturally you gain experience for each successful kill, but in keeping with the emphasis on adventure gaming youre also rewarded for each previously unexplored tile you set foot on. Additionally, each of the four exhibits is completely self-contained: you lose all your levels and inventory after completing each one, so you can tackle them in any order.

But while it may be adventure-centric this is still first and foremost a dungeon crawl, and that means youll have to make your own maps if youre ever going to navigate all its sprawling, complicated passageways. Its also possible to get stuck, so make sure to save in multiple slots: you shouldnt lose so much health that you simply cant survive a dungeon unless you really suck, but a runaway cart thats incredibly easy to accidentally trigger will block the exit to the mine if you dont plan ahead, and sometimes youll save the game in London only to discover that youve boxed yourself in with Bobbies covering all the escape routes.

While getting stuck is thankfully an uncommon occurrence, you will find hideous deaths awaiting you at every turn, often in the form of traps rather than combat  and man are they awesome. Every possible way you can die is accompanied by its own unique graphic, and they dont pull any punches when it comes to showcasing a gruesome demise. Whether its your face and intestines having been ripped out by the living dead, your exposed flesh infested with a patch of diseased spores, getting smeared into chunky paste by a cave-in, razor-sharp spikes piercing your chest and eyes, or merely all your appendages being torn free by venomous vines, failure has never be so rewarding. 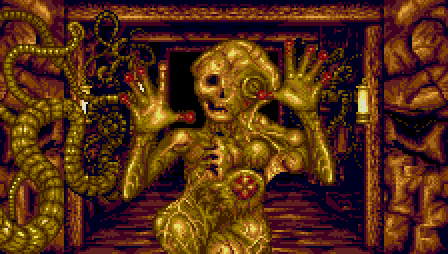 So unless youre a squeamish Mr. Sissypants, dont fail to try out this excellent adventure/RPG  or its beloved and very similar Elvira-licensed predecessors, Mistress of the Dark and Jaws of Cerberus, a testament to the sordid strength of a series in which horrific gameplay is finally a GOOD thing.

If you enjoyed this Waxworks review, you're encouraged to discuss it with the author and with other members of the site's community. If you don't already have an HonestGamers account, you can sign up for one in a snap. Thank you for reading!

© 1998 - 2022 HonestGamers
None of the material contained within this site may be reproduced in any conceivable fashion without permission from the author(s) of said material. This site is not sponsored or endorsed by Nintendo, Sega, Sony, Microsoft, or any other such party. Waxworks is a registered trademark of its copyright holder. This site makes no claim to Waxworks, its characters, screenshots, artwork, music, or any intellectual property contained within. Opinions expressed on this site do not necessarily represent the opinion of site staff or sponsors. Staff and freelance reviews are typically written based on time spent with a retail review copy or review key for the game that is provided by its publisher.