The first two Gothic games chronicled a warrior (who made up for his lack of name with a +2 beard of fluffiness) as he did battle on the island of Khorinis; a holiday hot-spot that included a magically-locked prison that Beardy once called home choked with homicidal maniacs, overbearing guards and power-hungry mages. Even when he found a way out of said death-camp, he discovered the outside world was filled to the brim with bloodthirsty bandits, hostile wildlife and snappish dragons that ate first and asked questions later. With this in mind, it comes as no surprise to see that in Gothic 3, he gets the hell off the island and moves towards the mainland.

What's the worst that could happen? Myrtana presents a much bigger world (four times bigger, to be exact) to explore; one filled with open plains, dank mountain passes, sandy deserts and vast forests. It's also been overrun by an orc army that threatens to push humanity to the brink of extinction. The few humans that survived the initial attack found themselves split into two main groups; the first fleeing to the outskirts and hidden corners of the land to form a resistance against their new green overlords while the second group now works besides them as mercenaries. Anyone not strong enough to fall into these categories is either a gladiator in the arenas set up by the orcs for their own viewing pleasure, a slave, or a corpse.

What category the nameless warrior falls into is entirely up to you, but interesting to note is that, unlike many other open-ended RPGs, is that no choice perfectly categorises a good or evil path. The rebels might seem to initially have the more just cause in recapturing their homes and lands, but you'll soon discover that the orcs are not the bloodthirsty horde that many fantasy games depict them as. Instead, they're a nomadic race that places high emphasis on honour and even respect the rebels that fight so valiantly against them. Most of the human mercenaries on their side aren't money-hungry traitors, either; instead they're just normal people trying to make the best of a bad situation. But even then, Piranha Bytes ensure that neither camps are dipped in purely black or white, but differing shades of grey: some orcs abuse and slaughter their human slaves for kicks, while many rebel camps are tainted with infighting, needless violence and overreaching greed. 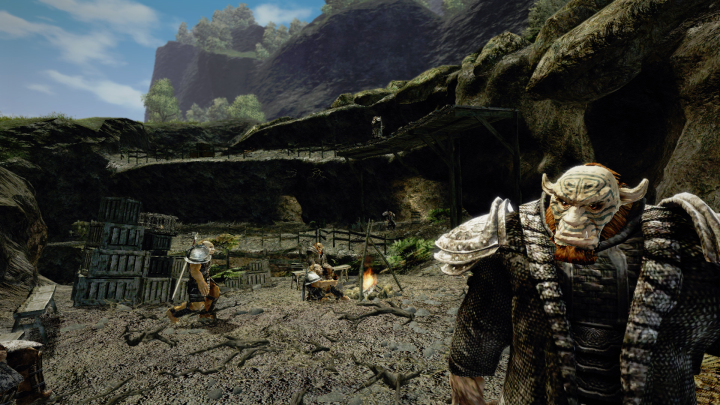 It is up to you to chose a realistic path to travel; there are no clear-cut moral walkways that will guide you through the ravaged lands of Myrtana. Join the bandits, join the orcs or play both sides off against the other. You can even ignore them both -- until late in the game, you are free to use the factions in anyway you please.

Within the folds of the orc camp, I found myself constantly having to fight my way through a number of arenas or see off roving bandits to prove my mettle as a handy combatant, gaining enough respect to rise through the ranks of warriors. Honour and riches were mine all on the strength of my blade but before I did this, I paid a visit to the rebel hideout, where I found I would need to clear a woodland area out of vicious boars that had plagued a small camp with nocturnal attacks. Feeling confident in returning to the ragtag resistance group with a few meaty carcasses, I trotted off to the forest and was promptly beaten senseless by angry fluffy pigs.

It is fortunate that you can't really be killed in the first half or so of Gothic 3, because you'll spend a lot of your time getting your arse handed to you. Based in real-time, you guide Beardo around using the arrow keys and mouse respectively, clicking the mouse to parry blows and make a varying degree of attacks, but what takes a while to get used to is the timing needed to do this. Thrusts, parries and blows need to be delivered just right to sneak past the enemy's attack leaving players more used to Oblivion's 'charge in swinging' style a little disorientated. Striding into the sunlight-choked forest with a nasty looking sword slung over my shoulder, I confidently charged at the first boar I saw, pummeled the attack button and swore heavily as it charged through my clumsy swings and bowled me over. 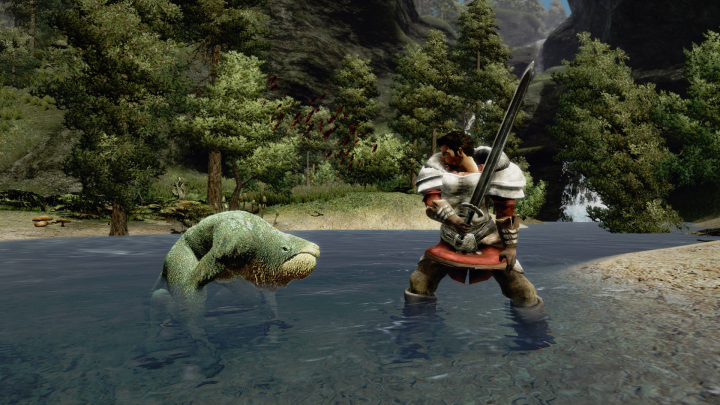 These problems can be overcome by learning the battle system employed, investing level-up points in various attack skills or by utilising a better weapon for given foes (for instance, when I took on a boar with the much longer-reaching scythe, they fell with almost insulting ease) but some of the other quirks thrown up in battle are not so easily side-stepped. The smallest of these is the awful grunts of pain you or your foes will release after being struck, often making each battle a veritable concerto of "Oh! Oh! Aw! Oh!" on a constantly repeated cycle. This only adds the what might be the game's biggest flaw; the dreaded stunlock.

Let's say a boar has bowled you over to the floor with a desperate tusk-tipped charge. You fall to the ground (with another chorus of "Oh! Aw! Oh!") and start to pick yourself back up. In mid-animation, the boar will attack again, throwing you to the ground once more, because, while you are picking yourself up, you have no control over your character. Meaning that getting stunlocked as such will, more often than not, lead to death. Happily, because you don't actually die in the first half of the game, it only means you get knocked senseless only to stagger back to you feet a few seconds later with only a sliver of health left -- which prompts the boar, who had started retreating as you fell down 'dead', to start his attack once more.

Competent players that have invested wisely in their fighting prowess will be able to dodge this happenstance more often than not, but anyone new to the Gothic series or those slow to pick up the unique combat system will face this frustrating circumstances a good few times before they learn how to stop it from happening.

The key to avoiding being mercilessly slaughtered by the local wildlife lies in the subtly improved leveling system that allows you to invest statistical points in various skills and traits. The player is completely open to chose what their avatar will excel and suffer at, offering them a completely blank slate to mold as they will. The only drawback to this very open customisation is the worry that the player will design a warrior who has basic understanding of everything but mastery of none; later on in the game when the most fearsome foes stop being stubby boars and instead turn out to be mammoth dragons, the lack of a well-built character will stop you dead in your tracks. So much so that new players may find themselves needing to start anew with a more focused character-build in mind or power-level up some neglected stats. 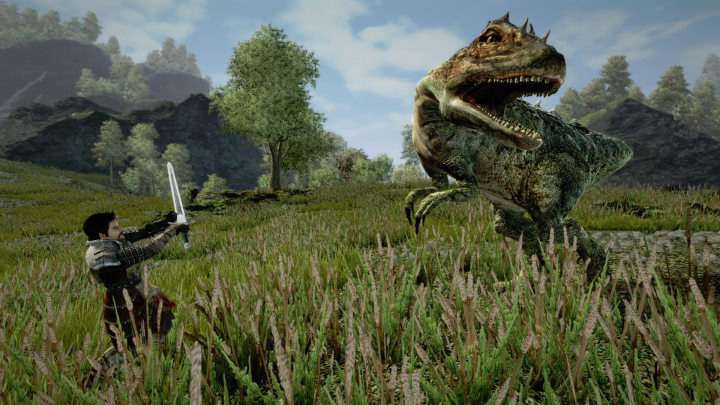 And this you can do. Unlike in Oblivion, the enemies around you do not level up as you do, but instead are fixed to a set sliding scale, ensuring that how you build your character will matter all the more. Some foes that you met early on in the game will annihilate you effortlessly, but return to them later and you can have your belated revenge. This was a good decision, one making leveling up more important and not letting you explore the entire world at the very start. To complete certain side-quests or mission, you must be beefed up enough to do so.

This only adds to the sense of vastness that Gothic 3 presents to players; the feeling that you are a small part of a huge world is sometimes overwhelming, leaving you unsure as to the next steps you can take. But that's okay, because there is very little you can't do, letting lost players literally make it up as they go along. There's still a small degree of bugs to work out of the game like poor AI path-finding that sends NPCs walking into -- and sometimes through -- walls and the odd graphical hiccup, but with the last patch released fixed the major bugs like the constant crashing,

If you're feeling a little empty after beating Oblivion or indeed feel like you want a new dose of open-ended gaming with dialed-up challenge, then step into the world of Myrtana. Help the orc army destroy the last fortified human town or save the land's king who resides within the stone walls. Or do neither and live off the spoils of war.

There's a lot to be said about a game that delivers on a promise that every play-through will unearth a different experience. This pro stands tall among a gathering of smaller cons.
4.5/5

If you enjoyed this Gothic 3 review, you're encouraged to discuss it with the author and with other members of the site's community. If you don't already have an HonestGamers account, you can sign up for one in a snap. Thank you for reading!

© 1998-2021 HonestGamers
None of the material contained within this site may be reproduced in any conceivable fashion without permission from the author(s) of said material. This site is not sponsored or endorsed by Nintendo, Sega, Sony, Microsoft, or any other such party. Gothic 3 is a registered trademark of its copyright holder. This site makes no claim to Gothic 3, its characters, screenshots, artwork, music, or any intellectual property contained within. Opinions expressed on this site do not necessarily represent the opinion of site staff or sponsors. Staff and freelance reviews are typically written based on time spent with a retail review copy or review key for the game that is provided by its publisher.