No matter who you ask, its a universally accepted fact that Castlevania III: Draculas Curse is the best of the 8-bit trilogy and the classic action-platformer installments in general! And that should come as little surprise, what with its awesome levels, three additional characters, multiple routes to Draculas castle, and of course triumphant return to the first games now distinctive style of gameplay. Yes, everyone recognizes the gaming brilliance that is Castlevania III  which is why Im not going to bother reviewing it. 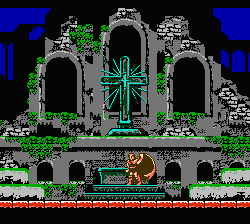 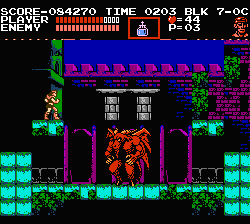 On the other hand, you might be surprised to learn that the original Japanese release, Akumajou Densetsu, is actually superior to ours in many ways, not the least of which being that it uses a more powerful chipset thats only compatible with the Famicom, Konamis VRC6. So while its true that Castlevania III already looks fantastic, the import sports a number of visual enhancements like an animated sky in the opening cinema or rays of light shining from the village crucifix. Most of these differences, however, were more likely removed from the NES game because of objectionable content: the shambling zombies look more human, those annoying little Igors have been completely replaced by bulbous rabbity things, all the various statuary are classical nudes, and the goat-like Leviathan is even more overtly Satanic with dark red skin, shorter horns, and the inclusion of a tail.

That said, its the music that truly stands out thanks to the VRC6s greatly expanded sound capabilities, adding three extra channels to Konamis already masterful compositions for whats probably the best sounding game ever released on the system. The fuller sound and superior instrument samples, particularly the strings and drums, are simply so much better in this version that the difference is like night and day. 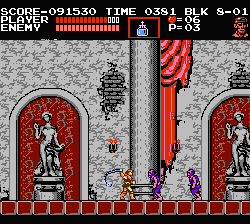 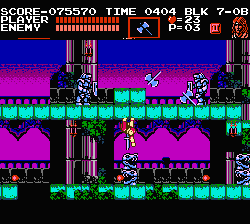 The changes dont end with superficial things like graphics and audio, either; Akumajou Densetsu is considerably easier to finish as well! Thats because the amount of damage that the enemies inflict is solely determined by the type of creature that hits you  unlike Draculas Curse, which calculates it solely by the level youre on. Thus while the Japanese version may seem more difficult initially, its also a lot more balanced as you progress through the game. And speaking of finishing, in this one theres a checkpoint right outside Draculas tower as opposed to trudging halfway through the stage all over again.

But perhaps even more significant is the acrobatic Grant DaNusty being even more overpowered than before. Already way more useful than the other spirit helpers thanks to his ability to climb all over the walls and ceilings, his default attack now hurls a powerful dagger across the screen. Its easy to see why it was heavily toned down into an extremely short-range stab; he might take more damage than Trevor Ralph when he gets hit and he can only toss one knife at a time, but an incredibly mobile character armed with an infinite supply of long-range, respectably-damaging attacks means any real Castlevania fan probably isnt going to get hit much in the first place. 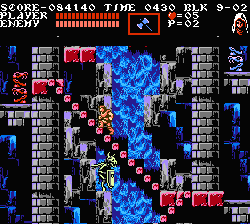 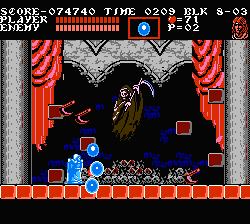 Whether youre looking for an even better array of sights and sounds, or always considered the NES version to be unfairly challenging (although this is statistically impossible, since Castlevania III is universally praised), Akumajou Densetsu is a must-play for anyone who loves classic Castlevania gameplay with a milder dose of classic Castlevania frustration.

If you enjoyed this Castlevania III: Dracula's Curse review, you're encouraged to discuss it with the author and with other members of the site's community. If you don't already have an HonestGamers account, you can sign up for one in a snap. Thank you for reading!

© 1998 - 2022 HonestGamers
None of the material contained within this site may be reproduced in any conceivable fashion without permission from the author(s) of said material. This site is not sponsored or endorsed by Nintendo, Sega, Sony, Microsoft, or any other such party. Castlevania III: Dracula's Curse is a registered trademark of its copyright holder. This site makes no claim to Castlevania III: Dracula's Curse, its characters, screenshots, artwork, music, or any intellectual property contained within. Opinions expressed on this site do not necessarily represent the opinion of site staff or sponsors. Staff and freelance reviews are typically written based on time spent with a retail review copy or review key for the game that is provided by its publisher.