Dont let the title fool you, this is really a Castlevania game. A long-lost Castlevania arcade game!

I mean it *is* part of the official timeline and the main character *is* a whip-toting vampire hunter who falls through the stairs. And its true that back in 1988 the only other games besides the original were Simons Quest and Vampire Killer; those three have so little in common that its not like there was an established Castlevania formula for it to deviate from. But however you look at it this one kind of sucks, and Im not talking about your blood.

That said, dont hate Haunted Castle just because there arent any candles to whip, the sub-weapons are totally lame, and Simon has blue hair. That would be silly. No, you should hate it because its a sadistic monster that feeds off your suffering (and pocket change). 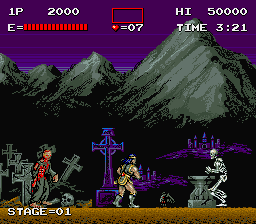 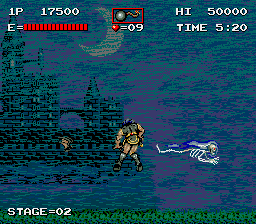 Not only is controlling Simon a typically clunky chore, but now theres hordes of enemies that swarm all over you  and thats if youre not playing the hard version, where touching one of them means INSTANT DEATH. Hearts are far and few in between without the ubiquitous floating candles and instead of quickly finding power-ups for the whip, you might pick up a morning star and then a broadsword (sacrilege!) in the second and third stages respectively. Whats worse, our hero walks and whips with painful slowness, something which is apparently foreign to his many adversaries since you might (mistakenly) think that hitting one would cause it to fall back or at least STOP MOVING. As if all that werent enough, sometimes one of the countless skeletons that you slay will suddenly transform into a ghost that shoots towards our hero with virtually no time for you to react.

At least there arent any of those impossible jumps where you leap into a previously unseen enemy and get knocked back into a pit; in this game getting hit causes you to shoot straight up into the air, which is ridiculous-looking but thankfully non-lethal. Then again those other games had the decency to give you unlimited continues; in this one you get one life per credit and a maximum of four credits per game. Even digital nightmares like Ghosts n Goblins threw you a bone in that respect; here its as if they actually want you to walk off in disgust instead of continuing to feed the beast! Oddly enough you can actually put a whole dollar in at once to give yourself a massive health bar at the beginning, but while youll initially survive a lot longer you wont get any health back at the end of a stage  and if you do fall down a pit youll have to start All. Over. Again. Oh, and there just happens to be one spot late in the game with four descending platforms that requires you to leap as quickly as possible if you want to reach the ledge on the other side, because theyre sure as hell not ascending again. 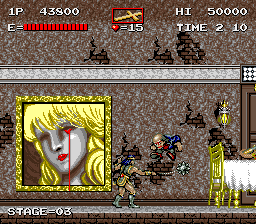 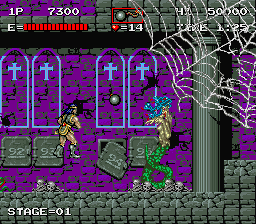 Now there are certainly some cool scenes in between all the dying, like when youre in the forest battling creatures that reach out from the trees only to have the ground suddenly ignite, forcing you to hop from platform to platform above a raging inferno. But then there are the times when youll be innocently walking down a castle hallway only to be suddenly transported to Ancient Greece, where you slay a few harpies before being just as suddenly transported back. WTF. At least developing for the arcades freed Konami from censorship, and as such youll get to see rotting zombies that drip blood, a bare-chested medusa (uncovered reptilian women are hot), rivers of gore, and a sweet painting that sheds a long, sticky tear.

But while Simon and company are a lot larger than the 8-bit games, theyre drawn nothing like Castlevania characters. In fact theyre pretty silly looking for whats supposed to be a horror game; SCIVs visuals didnt resemble the series proper either but at least managed to look creepy instead of campy. On top of that the backgrounds are awfully static, like the crypts lined with torches that dont even flicker. Come on, even the NES could handle flickering flames!

The bosses are similarly lifeless  youve got a rotating lizard thing, a rock golem that pounds you with its fist, and a chained-up Frankenstein monster that causes bricks to fall from the ceiling. Apparently Death was too embarrassed to even show up, no doubt having been instructed to float around in a circle and occasionally lob a skull at you. After crossing the longest disintegrating bridge in history youll subsequently come face to face with the Counts giant immobile head (it spits bats at you).

At least the soundtrack is Konamis usual excellence and includes sweet tracks like Bloody Tears and Cross Your Heart, which cant be found in any other game. And speaking of music  while the prospect of a Castlevania arcade game may seem tantalizing, in reality this is quite possibly the dumbest thing to hit the series except maybe the Dracula rap album. 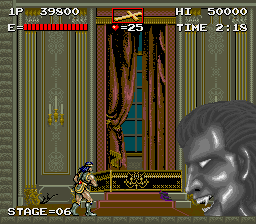 ITS BEEN ONE HUNDRED YEARS SINCE DRACULA MADE HIS MOVE
HES BACK, HES READY, COMING SOON
DRACULA, YOU BETTER BEWARE, YOUR TIME IS THROUGH
CAUSE SI-MON IS COMING, AFTER YOU
HES COMING! RIGHT NOW
GET READY! RIGHT NOW
BEWARE

If you enjoyed this Haunted Castle review, you're encouraged to discuss it with the author and with other members of the site's community. If you don't already have an HonestGamers account, you can sign up for one in a snap. Thank you for reading!

© 1998-2021 HonestGamers
None of the material contained within this site may be reproduced in any conceivable fashion without permission from the author(s) of said material. This site is not sponsored or endorsed by Nintendo, Sega, Sony, Microsoft, or any other such party. Haunted Castle is a registered trademark of its copyright holder. This site makes no claim to Haunted Castle, its characters, screenshots, artwork, music, or any intellectual property contained within. Opinions expressed on this site do not necessarily represent the opinion of site staff or sponsors. Staff and freelance reviews are typically written based on time spent with a retail review copy or review key for the game that is provided by its publisher.