And now for a ghostly tale of weal and woe concerning that ancient prince immortalized in literature . . . a legendary bloodsucker of stage and screen . . . the favored prey of leather-clad men brandishing whips . . .

Apparently discovering a little free time amid his busy schedule of being resurrected every hundred years and subsequently slain the next night by vampire hunters who jump through stairs, our fanged friend departs his castle one stormy evening looking to get lucky with a comely wench named Mina. To do so hell have to overcome the surprisingly deadly peasantry who have apparently decided that, much like communism, a Nosferatu system of government is all very well and good in theory but simply doesnt work when put into practice. 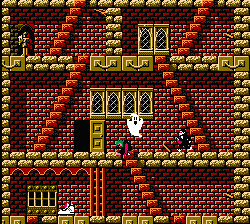 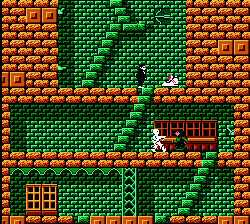 And so Master D begins the night (out) at the foot of his coffin on the castles highest floor, his goal being to reach the village in time for a bit of midnight romance (wink wink, nudge nudge) before dawn. As you begin the long descent youll notice that the place is crawling with ungrateful commoners looking to send our hero back to the grave, not with torches and pitchforks but by walking into him, so Drac will have to make use of his homes many deadly traps in order to survive. For example, that innocuous switch over on the wall? Pressing it will drop a nearby chandelier on anyone unlucky enough to be standing beneath it. That lever on the floor? It releases Frankensteins massive (and hungry) monster, who then patrols the floor in search of victims before returning to his cage. Or perhaps youd instead care to investigate what lurks behind that painting? A venomous spider emerges from a secret passage behind the adjacent bookcase. Ah, the joys of interior decorating!

Once a peasant has been cruelly struck down, perhaps after a saber launches itself from the wall and buries itself in someones chest, the Count can finish them off by partaking in a late-night nibble which also fills his health meter. But should the rabble strike down our hero he vanishes in a puff of smoke, merely knocked back a few floors as long as he has enough blood remaining  amass enough kills in a row, however, and he can transform into an invincible bat for a short while to make for a rapid descent. Caught in a tight spot without any traps at hand? Drac can also temporarily immobilize one of his foes through hypnosis at the cost of a pint or two. Blood: its not just for dinner anymore!

Of course none of that blood is actually depicted on-screen and some of the traps, like the stereotypical sheet-like ghost that floats across the screen or the giant spring-loaded boxing glove, are just plain silly. You might also agree that the music is rather bouncy for a game starring the soulless prince of darkness. However none of this can possibly compare to Dracs preferred power-up . . . the mighty Reebok Pump. As you may recall, Pumps were a poorly made yet incredibly expensive line of sneakers popular in the early 90s; I have no idea if theyre still made, as years of martial arts training has led me to the conclusion that footwear is for sissies. In any case, slipping on these soles will allow Dracula to run faster and jump higher than any vampire has ever dreamed before. Its gotta be the shoes! But just like real Reeboks, his Pumps will only last for a few seconds before disintegrating into dust. 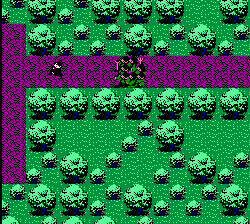 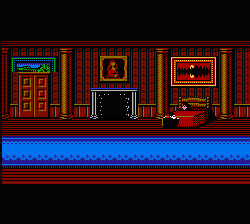 So, have you made it to the entrance yet? Ah, excellent! Our heros carriage departs for the village without a hitch, taking us to a very different place indeed. Unlike the trap-springing trip down the castle, we now arrive at a massive overhead area  the village, which by all rights should be labeled a city, is huge and filled with countless locked buildings that may or may not hide Mina. Its also filled with angry mobs who chase the Count down its mazelike streets while lone wanderers represent more easy pickings. Supping on these unwary residents will supply the keys you need, while the old men that dwell in some of the houses provide you with information regarding your love's location (aged people being very antagonistic toward the young). You may also find yourself looming over an innocent maiden enjoying her peaceful slumber; a quick bite and she becomes your hellish undead slave whose ghostly form will lead you closer to your goal if you can keep up. Dont forget  you only have until dawn!

If Drac can traverse these winding roads and alleys to reunite with his woman, youll be treated to a brief victory screen before emerging back in the coffin for Round 2! However you might notice that youre in a deeper part of the castle with a slew of new traps to spring for your uninvited guests; with each round Draculas quest becomes longer and more difficult, as he takes an increasingly complicated path to reach the castle entrance and Minas increasingly obscure location. Should you successfully complete all five rounds, youll get 

Well . . . nothing, actually. What I didnt tell you before is that this game was never released and is in fact known only to exist in the form of an advanced prototype that was smuggled into the world at large, possibly by ninjas. 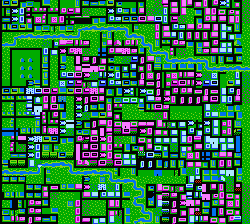 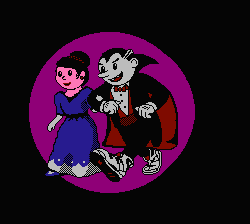 I cant tell you why the final game was never released or how close to completion it was, though I can speculate that the timing (1991 being the year of the Super Nintendo) coupled with the publisher (Parker Bros, not exactly the most important of licensees) were major factors. Somehow I also get the impression that Nintendo of America would have taken a rather dim view of murdering cross-carrying innocents with traps before drinking their blood, but who knows; perhaps one of the trolls in Marketing merely discovered that his company was publishing a game about Reebok-wearing vampires.

All right, so I lied about that weal and woe part. Dracs Night Out is a morbidly silly yet genuinely interesting game that you should see for yourself. Its pretty unfair to rate something that was never actually finished, but whats there is enjoyable enough on its own. If nothing else its development team really, really needs to get together with Kenji Eno and the designers of Monster Party to discuss future game ideas over tea and those little cake things. I can only guess as to what sort of mind-bending evil would result from such a meeting, but it cant be all that much more disturbing than Sonys stance on 2D software.

If you enjoyed this Drac's Night Out review, you're encouraged to discuss it with the author and with other members of the site's community. If you don't already have an HonestGamers account, you can sign up for one in a snap. Thank you for reading!

© 1998-2021 HonestGamers
None of the material contained within this site may be reproduced in any conceivable fashion without permission from the author(s) of said material. This site is not sponsored or endorsed by Nintendo, Sega, Sony, Microsoft, or any other such party. Drac's Night Out is a registered trademark of its copyright holder. This site makes no claim to Drac's Night Out, its characters, screenshots, artwork, music, or any intellectual property contained within. Opinions expressed on this site do not necessarily represent the opinion of site staff or sponsors. Staff and freelance reviews are typically written based on time spent with a retail review copy or review key for the game that is provided by its publisher.