Just like every other right-thinking individual, I eagerly anticipate the day/night/nuclear winter when the infernal legions of darkness rise up from their graves in order to crush the living beneath their desiccated heels. Hence the most noteworthy thing about this game is that its essentially George Romeros classic Dawn of the Dead adapted into a graphic adventure.

Of course it probably isnt an official license; while Zombi was actually DOTDs Italian title, neither the playable characters nor the zombies resemble their film counterparts and the title displays a boring skull instead of the famous bald posterghoul. Rip-off or not, the important thing is that the premise and gameplay are virtually identical: you control a group of four whove landed their helicopter on the roof of a shopping mall filled with the vitally impaired, only instead of building a private shrine to American materialism, your goal is to find some fuel and take off again. 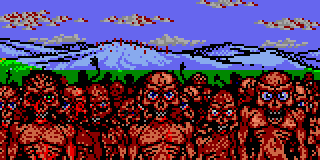 Now there are certainly some cool things to be found here, most notably the veritable army of bloodied cannibals that greet anyone foolish enough to stray too far outside. The mall itself features a wide array of colorful stores and dingy hallways strewn with graffiti and splatters of blood, while its current inhabitants are emaciated horrors sporting gleefully savage facial expressions and naked, tattered flesh that look like theyd be more at home in the similarly beloved Return of the Living Dead. Fans of Dawn (and who isnt) will quickly notice that most of the puzzles are taken straight from that movies plot up to and including an invasion of greasy bikers, though sadly theres no fight to the death with exceptionally lethal pies. As day fades into night youll also need a light source as well as food and shelter to keep up your characters stamina, especially if they were stupid enough to try and fight all the lifeless freaks wandering around with their puny fists against the zombies ragged claws. 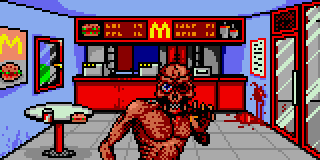 Unfortunately once the novelty of killing ravenous cadavers in a McDonalds wears off it quickly becomes apparent that this game is both extremely short and overly simplistic, not to mention utterly directionless. From start to finish youre given virtually no indication of what to do unless youve already seen the movie. Otherwise youre probably not going to realize that your immediate task is to prevent any more zombies from getting into the mall or how to go about it, particularly since there isnt any in-game story, description, or dialogue to tell you whats going on.

Even then you can expect plenty of pixel hunting as you click on everything in sight in order to figure out which objects can actually be manipulated, which certainly isnt made any easier when the actual playing window is so tiny despite all the wasted empty space covering the screen. The concept of controlling four separate characters is also pretty much wasted as there are precious few times when they need to use teamwork in separate locations, and none have any skills to set them apart other than Sylvies pointless inability to use the rifle in lieu of a pistol. Just about the only action that you can perform outside of combat is to use an inventory item, which simply activates if applicable rather than having you specify what to use it on. Speaking of items, Zombi anticipates the future genre of survival horror by limiting your carrying capacity to only a few at a time, which gets pretty annoying when you have to start picking up all the corpses lying around so you can stick them in the freezer. 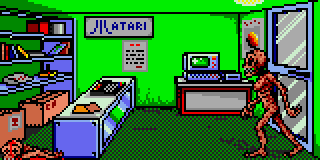 And while at first glance there might seem to be an action element, combat is so dull that this is definitely a pure point & click adventure. Whenever a zombie appears it harmlessly marches back and forth across the screen until you either strike first or wait around too long, which finally inspires it to start ripping into you. However since a bullet to the head will kill it instantly and only one zombie can appear on the screen at a time, the ridiculously simple task of undead hunting is nothing more than tedious work. As if all the quickly obtained weapons having infinite ammo didnt make this easy enough, you can also freely advance to another screen even if theres a zombie parading about right in front of you, utterly removing any sort of tension that there could have been.

With so much squandered potential it should come as little surprise how quickly this game dropped from store shelves to being a freebie included with Amiga magazines. Too weak on its own merits to really please any but the diehard adventure gamer, this ones strictly for you zombie fans who dont mind passing the night away by digging up something old and kind of rotten. 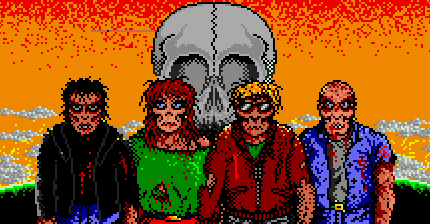 If you enjoyed this Zombi review, you're encouraged to discuss it with the author and with other members of the site's community. If you don't already have an HonestGamers account, you can sign up for one in a snap. Thank you for reading!

© 1998-2021 HonestGamers
None of the material contained within this site may be reproduced in any conceivable fashion without permission from the author(s) of said material. This site is not sponsored or endorsed by Nintendo, Sega, Sony, Microsoft, or any other such party. Zombi is a registered trademark of its copyright holder. This site makes no claim to Zombi, its characters, screenshots, artwork, music, or any intellectual property contained within. Opinions expressed on this site do not necessarily represent the opinion of site staff or sponsors. Staff and freelance reviews are typically written based on time spent with a retail review copy or review key for the game that is provided by its publisher.