To conceive where we are going, we must first appreciate where we have been.

The year is 1987, and juvenile delinquents across the globe are engrossed as their precious allowances get devoured by an epidemic sweeping across the arcades. They swear, they curse, they kick at study cabinets in fits of frustration and rage, but they keep spending their time and money on R-Type.

R-Type was coeval with the popularity of shmups not by mistake.

But it's no longer 1987. In an age where games have development budgets that would place third-world countries back on their feet, not to mention production values that rivals anything Hollywood spits out, what place is there for this forgotten patriarch? Newer shooters have protagonists that slide gracefully across the screen, barrel-rolling across pristine landscapes awash with well-presented targets that pale only in comparison to your sleek craft's futuristic and dashing demeanour. In contrast, R-Type's disturbingly phallic-looking R9 fighter lethargically limps across the screen, chugging slowly towards waves of simplistic antagonists. No salmagundi of bullets flood your screen like Ikaruga or Chaos Field; projectiles instead float dreamily towards you, almost leisurely. Because of this, many gamers have been lulled into thinking that an easy victory is assured, and they've all met with an untimely demise. You see, kids, R-Type is unapologetic in its maliciousness, unforgiving in its aggression, and unrelenting at its very core. If games were made to be beaten, this is one that will only do so kicking and screaming. 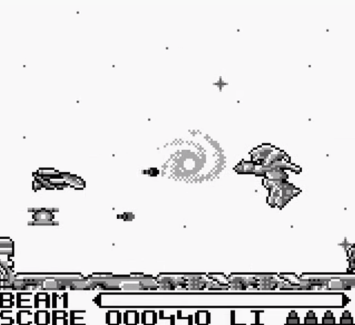 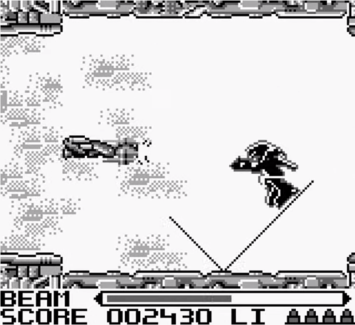 Irem refuse to offer easy rides, presenting unwary players with levels that contain the creations of a sadistic mind. The first stage allows you to glide carefree though a few swarms of moth-like adversaries that are easily eradicated with a smattering of blasts from your standard laser, or, should you favour overkill, you can charge up said weapon by holding down your fire button.. Things are easy, all the easier upon the destruction of a rotund, hopping target that leaves in its wake a weapon upgrade. Swoop in and collect this little icon, and you'll procure the Force Device! This handy little helper attaches itself to the front or rear of your R9, unleashing further waves of destruction. A few more languorous lackeys will sail haphazardly into certain doom, your newly acquired firepower mowing them down effortlessly. Why, you can even detach your new-found buddy, having it act as an independent point of fire, offering up two differing funnels of artillery to play with. It can work as a semi-self-dependent weapon; it can soak up any bullets it comes in contact with, and, looked after and upgraded properly, it can wield a staggering amount of stopping power.

You'll lose it barely a minute after gaining it.

The open environment you once happily frolicked in quickly bottlenecks into a claustrophobic corridor that finally leads into a more spacious enclosure stacked full of threats. Furnished with floor-to-ceiling artillery and infested with pod-shaped critters that cluster together, you're faced with a challenging obstacle to bypass safely. It's in navigating yourself through the tight gap that your mortality asks questions of your abilities; as the screen scrolls lazily towards the entrance, you become frantic, unleashing a hailstorm of overcharged blasts and launching your Force Device into the enemies' midst, all in a desperate attempt to whittle down your aggressors before it's too late. Like all shmups, R-Type can be made simpler by repeated play-throughs where you can memorise the aggressive formations shown by those who wish to do you harm and cement a solid strategy that will have you sail through threats. But set pieces like this ensure that, despite having a practised eye, you can still get killed at any second. Fail to snipe out that pod lurking right at the lip of the gap; fail to time your rush through the opening correctly and glide into an incoming bullet; fail to appreciate the pure single-mindedness of your foes, and you'll die. No amount of practise can save you from this. 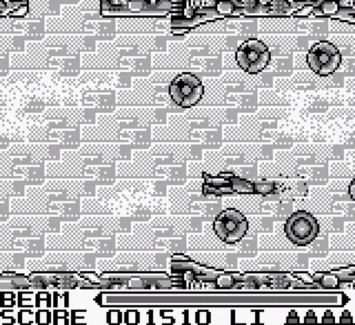 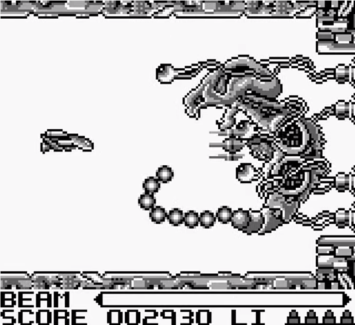 The same trick is used later in the level, but instead of a plethora of smaller crafts, a single alien entity three times the size of your craft glides eerily along on a jetpack, a gargantuan cannon grasped firmly with you in its sights. If you want to continue, you need to destroy him before he can get off a single shot; you don't have room to manoeuvre if he fires at you.

Sandwiched between these two spots is a circular chain of metallic disks that gyrate in a clockwise motion, a single link missing. They can't be destroyed; the only way to progress is to dart through the small gap, hold steady while they orbit around you, and then zip out the other side when the chance presents itself -- no easy task with the ponderous pace of your R9 fighter. Something else to keep in mind is that the disks will fire at you the second you think the threat is bypassed; the only way to prevent this is to target the off-coloured link and blast it until the sharply-presented circular obstacles become grey globs of corroded junk. They'll still claim one of your lives should they make contact, but it's one less wave on gunfire to worry about!

Scrape through all the above -- and more -- and the obligatory end-of-level boss will scroll into view. Taking up half your screen and held aloft by the tendril-like power cables that tether him to the wall, the beast is a nightmarish fusion of biology and technology. A serrated tail trails from the rear end of its cocoon-shaped form, one that strikes out at anything foolish enough to stray near. A strobiloid skull glares from behind a gaping Neanderthal jaw, each snout crowned by a solitary but threatening fang. Eyeballs hang from filaments provided by both the plug-in circuit-lines and the living beast, two sitting upon the target's belly, bordering the much fabled 'weak spot', a canine head that snarls at you from behind its many defences. 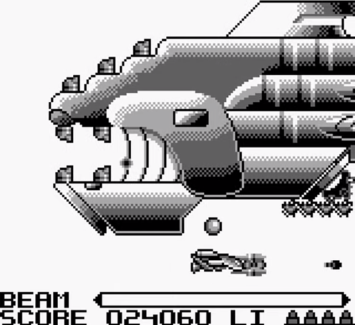 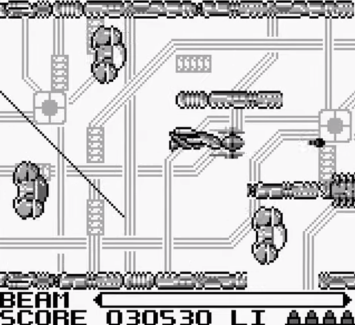 If you managed to get to this point with your Force Device intact, then it's simply a matter of launching it past the whiplashing tail and into your desired target. All you need to then do is keep the firepower flowing, and dodge rings of plasma as you try to avoid coming into contact with that pesky tail.. If not, then you'll instead have to find some semblance of safety to hide in, timing your attacks carefully to deliver overcharged blast of laser while avoiding unwanted attentions.

Quite the handful for the first level. Not that the others make it any easier.

The next level assaults you with wave after wave of tiny leeches that swarm towards you while mutated jellyfish float from the bottom of the screen, trying to end your quest early. Pick up enough power-ups and slogging through these becomes all the easier. The wave gun fires a slew of ring-shaped blasts that plough a path through anything that gets in your way; reflective beams emit from your craft at varying angles, bouncing off borders and eradicating any targets they happen to touch; missile strikes stream from your rear, seeking out explosive mayhem and making those skies a little more friendly. The appositeness of their application only makes it all the more heartbreaking when they're all taken away from you. To die is easy in R-Type; to survive is the challenge.

Blast off and strike the evil Bydo empire, the game mockingly displays on the start-up screen. Easier said than done! You'll need a lot to see this one through to the end: patience, dedication, split-second reflexes, and luck. Shmups were built upon this challenge once upon a time, and it's no coincidence that R-Type remains a phenomenon that revolutionised a genre. The blueprints for greatness remain locked in a game that wants nothing more than to frustrate, to destroy, to see you work towards completion. There's no hand-holding, no cheap shortcuts, no easy rides. There is only a game's sadistic glee in the burning wreckage of a R9's mangled hull and a player's insatiable urge to right this wrong.

A lot of shooters have forgotten this. But we'll always have R-Type to remind us.
4.5/5

If you enjoyed this R-Type review, you're encouraged to discuss it with the author and with other members of the site's community. If you don't already have an HonestGamers account, you can sign up for one in a snap. Thank you for reading!

© 1998-2021 HonestGamers
None of the material contained within this site may be reproduced in any conceivable fashion without permission from the author(s) of said material. This site is not sponsored or endorsed by Nintendo, Sega, Sony, Microsoft, or any other such party. R-Type is a registered trademark of its copyright holder. This site makes no claim to R-Type, its characters, screenshots, artwork, music, or any intellectual property contained within. Opinions expressed on this site do not necessarily represent the opinion of site staff or sponsors. Staff and freelance reviews are typically written based on time spent with a retail review copy or review key for the game that is provided by its publisher.