No, your eyes dont deceive you  someone really had the balls to go and make a video game out of the infamous Texas Chainsaw Massacre. That knowledge alone probably isnt going shock someone familiar with the 2600s proud tradition of dick-munching alligators and ornery cowboy rapists, but in a bit of a switch you actually portray a famished Leatherface as he chases down helpless girls and then butchers them for dinner.

While playing the role of a frenzied cannibal might have had slightly more impact if he wasnt a bright blue blob sporting a misshapen gourd in place of a head and a water faucet protruding from his chest, in all honesty it doesnt make much of a difference. The most offensive thing about this game isnt the ghastly premise; its the mind-numbingly awful gameplay. With your puttering chainsaw burning gas the entire time, an average playthrough consists mostly of blundering into the wheelchairs and thorny bushes that fill up the screen and stop you dead in your tracks until you waste more fuel to escape them. 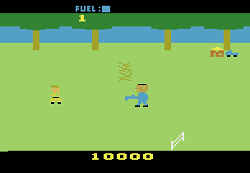 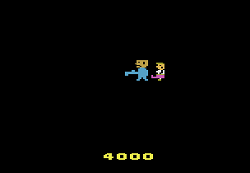 When you do catch up with one of your innocent dinner guests, easily differentiated from the not-so-innocent bushes in that they magically teleport behind you while a phone rings, you casually rend them into hamburger, run around some more, and eventually run out of fuel. Then your would-be victim kicks you in the butt. Since youre constantly losing fuel and yet have to score a ton of kills in order to get a refill, this is pretty much guaranteed to occur in less than five minutes.

So while it certainly pushes the envelope in terms of content even by todays standards, this massacre of good taste quickly runs out of gas both metaphorically and quite literally. Wizards stab at Halloween is actually surprisingly decent, but this ones so bad it could probably give even that evil-smelling General Custer nightmares.

© 1998 - 2022 HonestGamers
None of the material contained within this site may be reproduced in any conceivable fashion without permission from the author(s) of said material. This site is not sponsored or endorsed by Nintendo, Sega, Sony, Microsoft, or any other such party. The Texas Chainsaw Massacre is a registered trademark of its copyright holder. This site makes no claim to The Texas Chainsaw Massacre, its characters, screenshots, artwork, music, or any intellectual property contained within. Opinions expressed on this site do not necessarily represent the opinion of site staff or sponsors. Staff and freelance reviews are typically written based on time spent with a retail review copy or review key for the game that is provided by its publisher.