With a title like Sexy Droids it should be pretty obvious what to expect from this game: R2-D2 in a sequined bikini parading about like a two-credit trollop in order to distract a platoon of Imperial Stormtroopers from Princess Leias bedroom, where C-3P0 is hard at work demonstrating his unparalleled fluency in cyborg-human relations. Well unfortunately your expectations arent going to be fulfilled, because these droids arent anything like the ones youre looking for, PERVERT.

So put away that throbbing lightsaber of yours, because this is actually a simple but engaging puzzle game for the whole family. Unless your family happens to be offended by nudity, because theyre the sort of puzzles where you gradually reveal pictures of women revealing themselves. Only instead of Penthouse Pets in the buff, youll be treated to chrome-plated gynoids posing provocatively in skimpy swimwear  and Robocop helmets. Because Robocop is hot. But dont get so caught up in uncovering hydraulic hotties that you ignore the mechanized moans of passion theyve inserted into Soul II Souls song Back to Life, which is always sure to get a sexy droids firmware online. 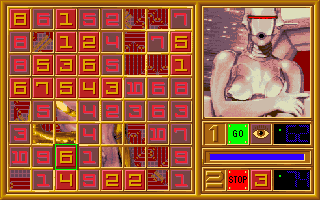 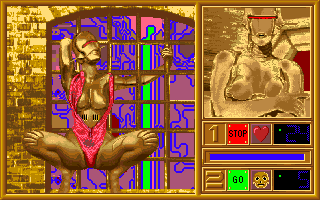 I have to admit that while Im all for battle droids, assassin droids, and even snooty fashion droids that help you become a drag queen, personally I am not at all aroused by bioroid females fashioned out of futuristic plate mail. Thats no reason to write them off though, because its actually a well done puzzle game that coincidentally happens to be totally insane.

You and the computer (or a friend, if you have one) take turns removing numbered tiles that cover the grid; the catch is that one player can only move horizontally and the other vertically. While the red tiles add the amount to your score, the black ones will deduct it, leaving you to hopefully force your opponent into falling behind without leaving them in an advantageous position for their next turn. To this end youll have to think several steps ahead and consider the whole playing field; the AI will often make what initially appears to be a dumb move in order to ream you later. If that sounds familiar its because this is a more graphic variation of the old BASIC game MaxIt in every sense of the word. You get all the bizarre hilarity of a Miss World 96 Nude except that its actually fun to play and has absolutely NO big-haired skanks or rotting corpses! 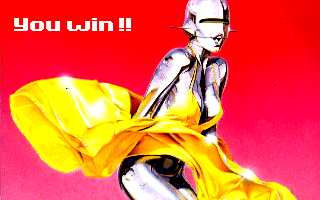 Now thats all very well and good, but youre probably still wondering why the fuck anyone would make an adult game about high-voltage vixens. Fear not, I shall put your mind at ease! After minutes of painstaking research on the internet, I have learned that the droid designs are the work of Hajime Sorayama, who is apparently a famous Japanese illustrator, so that makes it all perfectly acceptable.

In conclusion, it is my completely fair and unbiased opinion that Sexy Droids is the best game of its kind  which is to say, the softcore mathematical puzzle genre  at least until the release of Carnal Kunoichi: Naughty Ninja Nurses.
3/5

If you enjoyed this Sexy Droids review, you're encouraged to discuss it with the author and with other members of the site's community. If you don't already have an HonestGamers account, you can sign up for one in a snap. Thank you for reading!

© 1998-2021 HonestGamers
None of the material contained within this site may be reproduced in any conceivable fashion without permission from the author(s) of said material. This site is not sponsored or endorsed by Nintendo, Sega, Sony, Microsoft, or any other such party. Sexy Droids is a registered trademark of its copyright holder. This site makes no claim to Sexy Droids, its characters, screenshots, artwork, music, or any intellectual property contained within. Opinions expressed on this site do not necessarily represent the opinion of site staff or sponsors. Staff and freelance reviews are typically written based on time spent with a retail review copy or review key for the game that is provided by its publisher.