When a vengeful (aren't they all?) maniac named Michael Myers escapes from the mental hospital just in time for the holidays, it's a pretty safe bet that pumpkins won't be the only things getting carved up tonight. And being the nubile yet teasingly chaste babysitter that you are, you're horrified (but not terribly surprised) to discover that the murderer has sliced a path right to your door  TRICK OR TREAT!

There's only one person who can possibly pluck the precious children away from this pasty-faced menace! Unfortunately Michael Jackson is nowhere to be found, so with certain death lurking only a few steps behind, you'll have to get the little darlings to safety while eluding the killer's blade. Naturally they're scattered randomly throughout the house, running back and forth while flailing their arms wildly in a clever attempt to completely dumbfound any murderous onlookers. Thus as the sole voice of reason in this house of a thousand crackheads, you'll have to herd them one by one to the Safe Rooms on either edge of the hall. You might stop to question why such an easy to reach and completely unlocked location would be considered "safe," but I guess this will simply have to remain one of the many unexplained mysteries of the universe.

And while it's true that the Atari 2600 is about as well preserved as any corpse its age, Halloween actually does a pretty good job of being creepy. Everything's deathly quiet until Michael suddenly pops up to chase you complete with his famous music, and in true slasher fashion he'll go from being right behind you to lurking just ahead. The halls are lined with doors for him to emerge from, and just for good measure a few of the rooms suffer from flickering lights and temporarily plunge everyone in darkness to increase the tension. Of course, let's not forget the ridiculous 4-bit violence: fail to get away quickly enough and he'll make a beeline for any defenseless child you might have with you  and down they''ll go in a puddle of blood! And then he'll turn his attention to you. 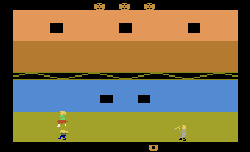 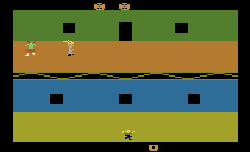 Hahaha! A small fountain of spurting blood shoots out of your character's neck and she blindly flees into the next room despite the obvious inherent difficulties of headless navigation. But just in case you suffer from an unusually pronounced sense of self-preservation for a chaste terrorvixen and leave the children to their grisly fates, you can also progress by tracking down a randomly placed knife and ramming it through your attacker's jugular.

Unlike Wizard's other effort for the 2600  the Texas Chainsaw Massacre  here the gameplay actually works. Not only is it easy to grasp, but there are two different ways to move on to the next round, you can actually get to the next round, and it manages to feel like a very early attempt at survival horror instead of just another action title with ugly graphics and some primitive gore. Of course, nothing in this game can possibly match true horror like the existence of Custer's Revenge. Sleep tight, kiddies!

If you enjoyed this Halloween review, you're encouraged to discuss it with the author and with other members of the site's community. If you don't already have an HonestGamers account, you can sign up for one in a snap. Thank you for reading!

© 1998-2021 HonestGamers
None of the material contained within this site may be reproduced in any conceivable fashion without permission from the author(s) of said material. This site is not sponsored or endorsed by Nintendo, Sega, Sony, Microsoft, or any other such party. Halloween is a registered trademark of its copyright holder. This site makes no claim to Halloween, its characters, screenshots, artwork, music, or any intellectual property contained within. Opinions expressed on this site do not necessarily represent the opinion of site staff or sponsors. Staff and freelance reviews are typically written based on time spent with a retail review copy or review key for the game that is provided by its publisher.