Get those tortured visions of Friday the 13th on the NES out of your head, because this Commodore 64 tape isnt nearly as bad (possibly because its a completely different game.) And besides, this one does a way better job of capturing the essence of its source material. Of course considering that the movies are basically cheap kills, cheap sex and even cheaper production values, the worth of this is debatable. And speaking of debatable worth, the only reason this isnt as bad as the Nintendo cart is because its SO MUCH WORSE.

As one of eleven campers wandering aimlessly across a crudely drawn Camp Crystal Lake that consists of 4x4 looping screens, you're left to:
a.) endlessly cover the same ground in search of the nonexistent lake
OR
b.) investigate a house constructed almost entirely out of living rooms. 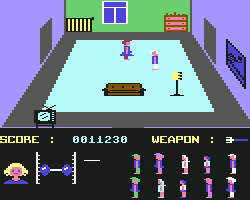 Okay, so maybe the graphics are pathetic, but the C64 has a reputation for great chip music  and this game does its best to undermine that position. At least it makes sense to play something like Toccata and Fugue, but you really have to wonder about the inclusion of the Bridal Chorus, Old MacDonald Had A Farm, and Teddy Bears Picnic. Its probably supposed to be humorous, but they neednt have bothered; theres already plenty to laugh at.

In an uncharacteristic attempt at cleverness, that shambling zombie bodybuilder Jason Voorhees has figured out how to successfully pass himself off as little girls and the elderly. Thats right, one of your campground companions is actually the homoerotic homicidal maniac in a cunning disguise! So while youre walking around in circles, that seemingly innocent man/woman/blocky-sprite-thing you pass by might actually be slaughtering your friends one by one until he works his way to you . . . which might have been more unnerving if the gameplay wasnt crappier than a Mystery Science Theater marathon.

Trying to fend him off with mere fists would (theoretically) be a bad idea, so there are a bunch of different weapons just lying around all over the place, which is rather pointless since the axe is the only one thats any good. Even then the controls are awful  you have to walk towards Jason while attacking in order to actually swing at him; merely pressing the button drops your weapon on the ground.

Since theres not a whole lot to the above scenario youre expected to play through it as five different characters in a set order, not that it really matters because theyre all exactly the same. Well, except for a couple of them having less health than the rest (idiotically enough, the characters in the middle) and each one sporting a meaningless introduction like: GERRY KING
Gerry has a taste for adventure. He would never refuse to help anyone and is a natural leader. He uses his combination of strength and intelligence with great success. But what is his hidden weakness?

And your reward for killing Jason with all five of these exhaustively developed souls? You start all over again with that brainy hunk Gerry King in the vain hope that youll at last uncover his hidden weakness. (If history teaches us anything, its probably his penis.)

But the best (and worst) part is that you can attack any of the other campers yourself, and if your current victim is actually Jason hell reveal his true self for a moment but wont fight back.

HE WONT FIGHT BACK.

You can seriously finish every round by giving everyone a quick whack with a hatchet and then slicing up the right one with total impunity. But why stop there? Its far more efficient to just heartlessly butcher all your friends so you can better identify the real McCoy  and its no more lame than simply waiting around for him to do it on his own, only to eventually meet up and trade blows. In another example of fine programming at work, you can actually resurrect your deceased (former) buddies by repeatedly thwacking their corpses until theyre sufficiently persuaded to get back up and start living again. Just about the only legitimately cool thing here is the long, tortured scream that suddenly pierces your speaker every time someones killed, even off-screen. That and stumbling upon a dead body, which sometimes treats you to a close-up of some poor bastards head with a gory machete buried in it. You can't do that on Nintendo! Sadly, you never once stumble onto a hot new wave chick in the shower or a pair of randy teens clumsily pawing at each other, which would have truly reproduced Friday the 13ths particular brand of cinematic morphine.

© 1998 - 2023 HonestGamers
None of the material contained within this site may be reproduced in any conceivable fashion without permission from the author(s) of said material. This site is not sponsored or endorsed by Nintendo, Sega, Sony, Microsoft, or any other such party. Friday the 13th is a registered trademark of its copyright holder. This site makes no claim to Friday the 13th, its characters, screenshots, artwork, music, or any intellectual property contained within. Opinions expressed on this site do not necessarily represent the opinion of site staff or sponsors. Staff and freelance reviews are typically written based on time spent with a retail review copy or review key for the game that is provided by its publisher.