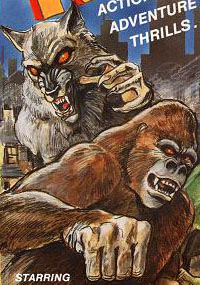 With the obvious exception of ninjas (because lets face it, ninjas are awesome), theres nothing that makes my pulse quicken faster than a little base villainy.

Oh, you know: securing indignant damsels to the local railways . . . leaving my captured adversaries to dangle precariously over a deadly vat of ice cream even as I confidently depart for the next caper . . . foisting shameless propaganda onto unsuspecting children under the guise of an official gaming magazine . . . and surely even you, dear reader, have considered searing your likeness into the surface of the moon at one point or another.

So you can well imagine my initial enchantment with Rampage, that dreadfully old coinop which sees one taking up the mantle of stereotypically gargantuan monstrosity and pounding the wonders of civilization into dust. If I had a moustache, let me assure you that it would be frequently stroked and accompanied by appropriately sinister cackles; Im sure youre feeling something similar. Bushy lip hair or no, after settling on one of the three selectable beasts  George the massive gorilla, Lizzie the leathery lizard, and Ralph! the rabid . . . wolf-like . . . thing  youll be off to foster a peaceful coexistence between humans and monsters through understanding and personal sacrifice, ultimately making the world a better place for everyone. Haha, just kidding. Its really time to SEEK AND DESTROY. Theres even simultaneous three-player action, which is definitely a brilliant feature  so you can attempt to stave off the monotony together.

For theres little sense of achievement to be found in outlasting one screen after another when they all feel idly slapped together; pretty much all you ever do in this tired cycle consists of scaling up and down one of the current levels array of buildings while simultaneously punching at its sides, only to hop to another as your titanic terrors perch begins to crumble into smoky ruin. The concept is pretty cute, what with all the unbridled smashery of passing vehicles and towering skyscrapers as tiny citizens wave helplessly from the windows (that is, before you knock said citizenry free and eat them), but it soon becomes monstrously stale after you advance to the next level and realize that its just like the last one, only with a slightly different placement of short-lived architecture and white bushes instead of green. Of course, thats not to say that nothing ever changes, which would be slipshod reporting; instead of being struck with a missile, you can be zapped by a lightning bolt.

This unshakable feeling of deja vu makes for a game that never really gives you either a sense of progress or a glimpse into the interminable lengths that stretch yet before you. In fact, Midway saw fit to program well over SEVEN HUNDRED screens for your enjoyment, a number of which are blatantly identical repeats of earlier levels rather than the merely spiritual repeats of earlier levels. Not that I speak from personal experience or anything; theres only so much mindless rampage I can possibly manage before redirecting my attention towards the vast hordes of worthy opponents lurking about the NeoGeo cabinets  or better yet, to my throngs of comely female admirers, what with all their slender waists, pert lips, and suggestive winks. Well alright, I have to admit thats a pretty flagrant exaggeration; the NeoGeo was never that popular.

Now theres certainly no shortage of irritatingly repetitious coinops to be sure, but this one further manages to drive nearly any skill out of the equation as surely as heroically swinging a longsword while sporting your 1-Up Mushroom t-shirt will send the ladies packing in droves. Despite their individual strengths it really doesnt matter which monster you select, since all share a few traits in common, namely their plodding pace and alarming vulnerability to damage. And damage is something that literally consumes the screen: a veritable army of minuscule soldiers protrude from the surrounding windows to lob their equally diminutive bombs, just as helicopters constantly pelt your hide with machine gun fire and the occasional tank leisurely treads by to shell you into oblivion. Many of these attacks are fairly aimless and none can inflict much more than a sliver of harm individually, but their overwhelming numbers and unrelenting assaults will gradually wear down your altered beast  and youre simply too large and ungainly a target to avoid them.

You can snack on the foodstuffs that are constantly being left behind after introducing a portion of wall to your mighty fist, but with a dozen more pinpricks being inflicted on you in the meantime, they simply arent enough to stem the tides of your inevitable demise. For that matter, there are also objects that drain your health instead and its pretty difficult to differentiate among the various types given their meager size, and the next thing you know youre chomping down a prickly cactus! It may appear comical to watch your battered monster shrink back down into his or her former (naked) human self and sheepishly creep out of view while covering the appropriate naughty bits  but not when its a cheap certainty that occurs every few minutes.

Consequently Rampages attempts at proper villainy ultimately fall flatter than an animated coyote (apetitius giganticus) who finds himself momentarily hovering with the clouds high above a desert ravine. Granted, at least it can briefly offer the mild joys of shallow destruction to the tune of two bits, but only a few screens later youll surely realize that your money is better squandered elsewhere; with virtually nothing new to discover and an unavoidable need for frequent continues, its flimsy idea of fun wears through far too quickly, and before they know it your remaining quarters may find themselves in grave danger of a NINJA AWESOMENESS ATTACK.

Because lets face it, ninjas are awesome.

If you enjoyed this Rampage review, you're encouraged to discuss it with the author and with other members of the site's community. If you don't already have an HonestGamers account, you can sign up for one in a snap. Thank you for reading!

© 1998 - 2022 HonestGamers
None of the material contained within this site may be reproduced in any conceivable fashion without permission from the author(s) of said material. This site is not sponsored or endorsed by Nintendo, Sega, Sony, Microsoft, or any other such party. Rampage is a registered trademark of its copyright holder. This site makes no claim to Rampage, its characters, screenshots, artwork, music, or any intellectual property contained within. Opinions expressed on this site do not necessarily represent the opinion of site staff or sponsors. Staff and freelance reviews are typically written based on time spent with a retail review copy or review key for the game that is provided by its publisher.