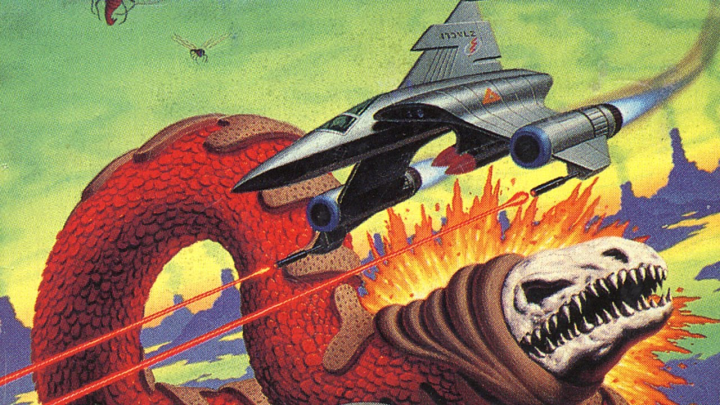 All things considered, a lot of us should enjoy getting our shoot on. A large slice of the gaming population likes to invest its time being washed over by random explosions, racking up huge opposition death-counts and guiding underdogs to total victory against overwhelming odds. The long standing defining traits of side-scrolling shooters, and gaming ingredients that are still today abused in mass abundance. So ask yourself this: where have all the shoot-'em-ups gone?

Perhaps the answer lies in the fact that it's a famously hard genre. Players need to memorise the wave of aggressors that assault them at set times to gain a higher percentage of survival. They must hone split-second reflexes to dance unscathed through a screen of glowing projectiles to unleash blistering counterattacks. Maybe this generation of gamers thirsts not for such an investment -- or maybe the genre simply ran out of life. Maybe it was the lack of innovation that stopped it in its tracks. Can it really be argued that most shooters don't all travel the same path? You scroll, you shoot, you dodge and not much else.

On the surface, this brave statement is not supported by the player's initial decision on which of the four insectile-looking craft they get to choose from, but those looking deeper will find more than their unique appearances separating them. Each intergalactic harbinger of doom utilises power-ups in its own way, some morphing everyday laser beams into devastating solar-charges that effortlessly disintegrate all in their path, while others take a substandard spiracle shot and transform it into a star-bursting eight-way beam that literally covers the screen in pulsating rays of plasma fire. 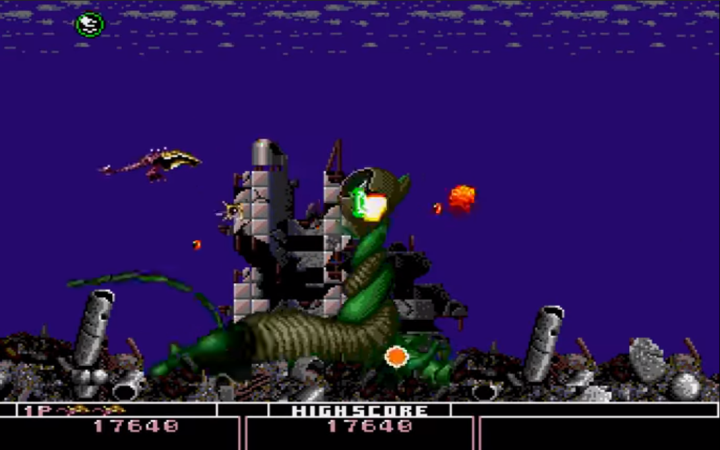 Being a random nasty in a side-scrolling shooter has never been so perilous!

Not that they need fear your ship's primary source of offence: a placid green laser that can be overcharged into something a little more fearsome with a hold of the fire button. The aforementioned heavy artillery all comes exclusively from the small satellite object that's equipped to your fighter of choice. Although these orbs have been seen in games as early as R-Type, what Bio-Hazard Battle does differently is give you complete control of your satellite and the chance to weave a wave of destruction 360° around your craft!

The travelsome orb moves conversely to the direction you pilot your craft in. Descending will make your fiery little helper scroll smoothly topside, whilst reversing will send it spiralling towards your nose. This leads to two possible scenarios:

1/ You let the satellite roam around unchecked while you zip around the screen nuking enemies with your less effective green laser blasts.

2/ You carefully position the satellite by employing minor, carefully-plotted movements and mow down aggressors with the heavier onslaught it offers.

The second option is by far the most effective of the two; remembering that your ship's lacking green cannon cannot be upgraded, you must rely on the raw power that only your orb can collect to reach your full potential. With that in mind, ask yourself this: what happens to the precise and fiddly satellite controls when you need to start weaving in and out of enemy fire? 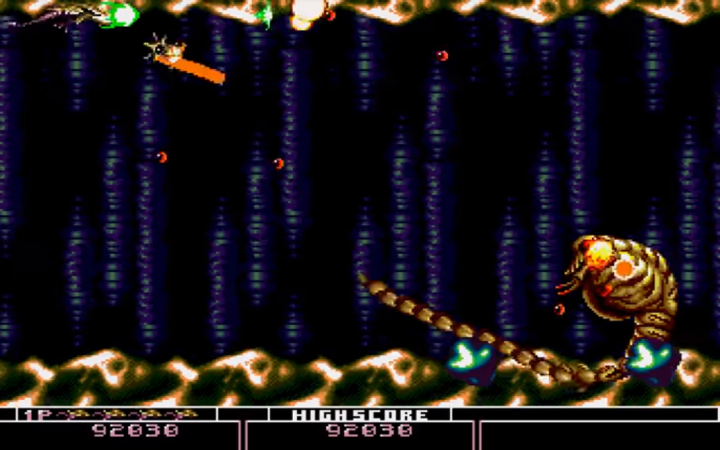 The answer is the bloody thing goes crazy, and you have to struggle to regain your most prominent form of aggression as it randomly swivels around your craft, painting the screen in a random coat of gunfire.

And while the first level never really makes that a problem as you descend from a starlit sky into a wispy, cloud-filled atmosphere to blow away giant wasps and strange airborne squids, it soon becomes clear that this is because it might as well have "training stage" flashing on and off in the background. Power-ups of all styles are plentiful, giving you chance to test out your pick of artillery on targets that are only too glad to glide carefree into your attacks. The level cumulates all too soon, sans even the obligatory end-of-stage boss, as the screen descends into darkness and you're informed Stage 2 is about to begin.

Then all hell breaks lose.

Immediately assaulted by a riot of crusty-looking fly larvae, you scramble to make the best use of your twin artillery, bathing the area in a non-stop assault to dissuade your numerous foes. These soon give way to serpentine worms with malformed heads who sneak out of the screen borders and chase your craft ruthlessly while something that looks strangely like Boba Fett's famed jetpack zips about if left unchecked, hurling tomahawk missiles. Just as you start to feel you have the situation under control, the screen is suddenly cut in half by thick steel scaffolding, forcing you into claustrophobic confines before introducing a heavily armoured bug that runs along the divider like an impromptu monorail.

Did I mention that it has a huge cannon capable of spewing flaming balls of magma grafted to it? You'll notice it on your own soon enough; it's aimed right at you.

Frantically trying to keep your satellite cocked at an angle that can hit your newest foe, you must also contend with the sudden lack of space you've been thrust into. Having to constantly dart through gaps in the metallic scaffolding to ensure you have room to work with, you must also endure the unwanted attention of those pesky killer bees and irate larvae once more, all the while trying to dial up the damage on that cannon-wielding creep keeping perfect time with you. Eventually, you either blow the damn thing up or it simply runs out of track and falls to a fiery death. But there is not yet time to gloat. 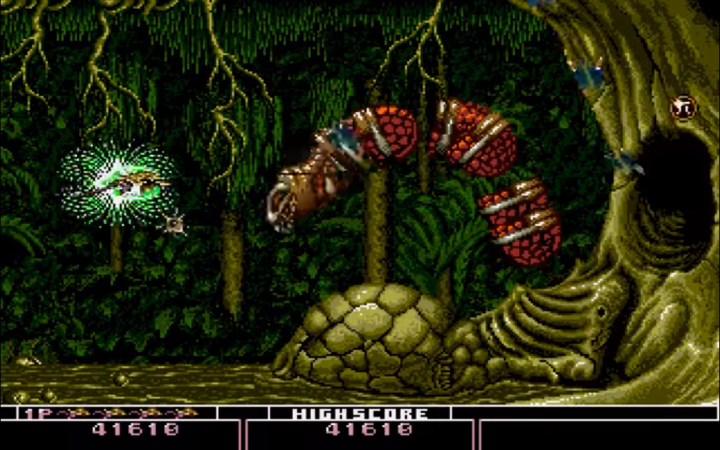 Bright red abominations closely resembling the chest-bursters from the Alien franchise crawl eagerly up the multi-story buildings in the heart of the post-apocalyptic metropolis that you've flown into, only to fling themselves towards your ship with reckless aplomb. This continues until you reach the outskirts of the now-dead city where the once-looming buildings have been replaced by mounded piles of rubble. From this wreckage emerges a slew of ambushes that have you constantly scramble to stay one step ahead of, finally cumulating in a bullet-spewing eyeball poking out of a crumbling factory building.

Destroying the concrete shell results in the whole creature emerging from the wreckage, its single eye still present but supported by a twisted column of green-tinted flesh. Scorpion-like in appearance, not only do you still have the rapidly-flung bullets to contend with, but it constantly assaults you with chunks of rubble excavated from its now-ruined home, hurling them in your direction with a flick of a slim tentacle.

And that's only stage two! There's another six to look forward to yet. 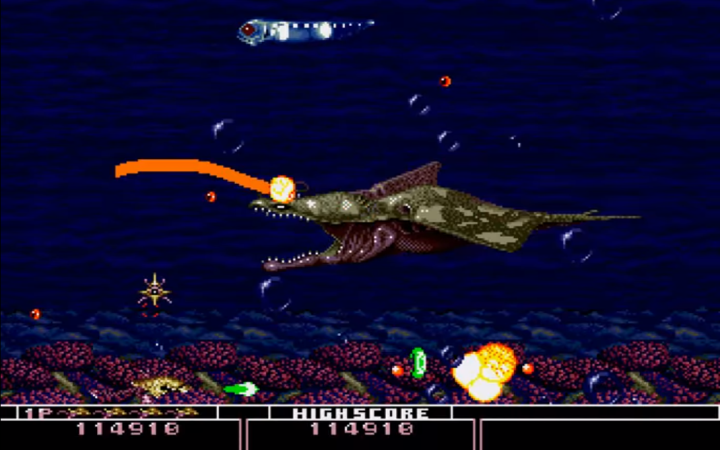 Levels that will see you braving a scenic jungle where palm trees that blend in cunningly with the outstanding background suddenly start spinning like a sycamore seed, launching upwards to try and harpoon you in mid-air. Levels like the moss-covered cave you must excavate while dealing with fleshy pink umbilical cords that routinely shut off the narrow, winding corridors, forcing you to pummel them into destruction so they can be safely bypassed. Levels that plunge you into an ocean's depths to take on angry aquatic onslaughts, and levels that have you soar into space to challenge an entire space-station, long since claimed by the biological nightmares that have plagued you all game. But more than anything else, you'll find levels that will not let up on the frantic pace. Levels that will insist you use your satellite to keep the enemy forces down in an invigoratingly unique way, and levels that aren't afraid to make you work for your victory.

And victory you will crave, for Bio-Hazard Battle succeeds where many other have failed; it breathes innovation into a crumbling genre. What makes the game even more special is that the gimmick it relies on never burdens the game, but instead serves only to highlight that within lies everything you can expect from a competent shooter: you scroll, you shoot, and you dodge. It's happy to give you all that, and then it smugly offers you even more.

If you enjoyed this Bio-Hazard Battle review, you're encouraged to discuss it with the author and with other members of the site's community. If you don't already have an HonestGamers account, you can sign up for one in a snap. Thank you for reading!

© 1998 - 2022 HonestGamers
None of the material contained within this site may be reproduced in any conceivable fashion without permission from the author(s) of said material. This site is not sponsored or endorsed by Nintendo, Sega, Sony, Microsoft, or any other such party. Bio-Hazard Battle is a registered trademark of its copyright holder. This site makes no claim to Bio-Hazard Battle, its characters, screenshots, artwork, music, or any intellectual property contained within. Opinions expressed on this site do not necessarily represent the opinion of site staff or sponsors. Staff and freelance reviews are typically written based on time spent with a retail review copy or review key for the game that is provided by its publisher.