What a horrible night to have a curse.

Here and there a brilliant streak of lightning illuminates the forlorn church, inviting us to glimpse into deeds better left concealed. A young beauty lies peacefully atop the aging coffin; thick strands of pale blonde hair cascade over its side as she sleeps, her slight form clad only in a simple white sheet. Sinister forms loom over her from the shadows, every blinding flash revealing their cruel faces  and the keenly-edged swords that hang expectantly over the womans breast. An angry bellow of thunder suddenly strikes along with an echoing scream of terror to mark this ghastly act as surely as the thick red stains that suddenly coat their blades. Mere moments later a cluster of bats burst forth from the casket and flap far off into the distance; the sacrifice has been accepted, and an ancient evil reborn  Dracula! 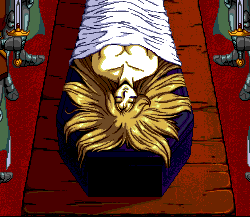 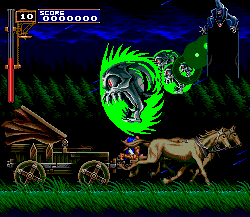 Ravenous for the taste of blood, this monster raises his legions of the dead to quickly descend upon the nearby villages and spirit away more innocent girls for a most unpleasant fate. He may be an inhuman horror from beyond the grave, but at least hes got style. That not all he has; from her prison high atop the towers of the demons castle, Annette Renard prays for the swift arrival of her fiancee  a certain Richter Belmont.

Those pesky vampire hunters! Our man of the (witching) hour was just on his way to work when he found himself warding off an unexpected brush with Death, that lovable harvester of souls having reinvented himself for the 19th century with a fine cloak and jaunty top hat. But you know what they say: the more things change, the more his gleaming scythe shears your fool head off. Thats not actually what they say at all, but nevertheless Dracula X strikes a masterful balance between old-school Castlevania action and all that newfangled exploration that dominates the series today as surely as our hero strikes an oaken stake into some luckless bloodsuckers heart. 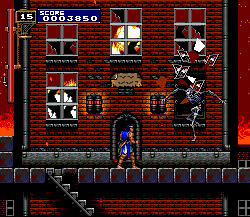 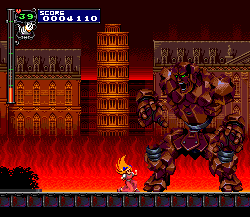 Theres plenty of the former from that first moment when youre dropped into the town of Aljiba, its familiar dreary brick houses and snaking staircases looking just like a seriously pumped up Simons Quest  or they would if the town wasnt burning to the ground. Youll have to dodge wooden barrels hurled by lumbering skeletal apes even as flakes of ash lazily descend onto our heros shoulders, much like the blade-wielding boneheads that explode through the blazing windows above. These are some of the best visuals youll find on the PC Engine, not merely because its a Super CD but because its crammed with a wicked sense of style that the NES games always wanted to have.

And theres plenty of the new as well: in place of rotating rooms and rocking chandeliers, youre instead presented with a non-linear journey into this dark world, a journey filled with secrets to be discovered tucked away in its murky corners. In days of old one would simply follow a straightforward path, perhaps smashing apart the odd nondescript wall and feasting on the juicy meat within before proceeding to slay a vile boss  Dracula X is certainly no stranger to horrific guardians and succulent wall-meat, but this is no straightforward quest. You could simply depart the hospitality (such as it is) of Aljiba trudging past the inferno of the town square and battling massive rock golems that try to pound you into a cloud of spraying gore, but uncover a hidden path and youll instead encounter a ravenous viper high atop a lonely stone bridge by the sea.

Every level harbors multiple routes, some in plain sight and other fiendishly concealed, that take you through a completely different part of the stage to fight a new boss and possibly even wander into an otherwise unreachable stage. Perhaps youll happen upon one of the kidnapped village girls, or perhaps youll just discover an army of the undead to whip into oblivion while rocking out to thrashing electric guitars and wailing organs as your favorite series tunes are done up in the PC Engines typically glorious redbook audio.

That and the gleeful laughter of the most savage instrument of destruction imaginable: a spunky little girl. 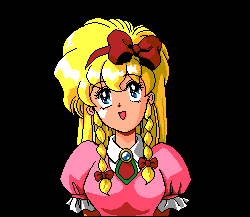 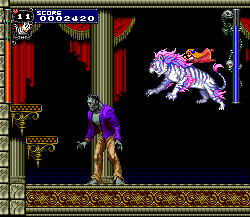 Soon after finding yourself pursued by a hideous ram-like creature that blindly plows through anything in its path, apparently unfazed by the fact that the lower half of its body has been severed at its gory vertebrae, youre likely to stumble upon the cell of something far more disturbing: Annettes little sister Maria. Yes, the very same Maria from Symphony of the Night, only back then she was a feisty twelve year old cutie whose painfully saccharine appearance belies the horrifying truth that shes even deadlier than a rampaging dragon. Picture, if you will, a sweet little thing clothed in a long pink dress with bright red ribbons nestled in her hair  and a glint in her eyes that is naught but pure, unmitigated EVIL to the undead. Oh yes, and Maria is a fully playable character; with long blonde locks fluttering behind her as she runs, hops, and occasionally flails about, this ostensibly innocent child brings a totally different playing style to the table with her far superior agility and ninja-like double jumps.

Rather than taking up a cumbersome whip or some equally impractical armament like her big brother (silly adults), Maria defends herself by firing small doves that fly out to strike enemies before returning to her grasp, tossing tabby cats that charge across the ground, or taking shelter from beneath an indestructible turtle shell while she leisurely creeps across the ground  not to mention annihilating foes with her horrible singing. And despite such examples of character design gone hopelessly mad shes definitely the stronger of the two thanks to her range, ease of movement, and smaller frame, which basically turns this game into a cakewalk for seasoned veterans. Luckily you traditionalists who like to keep it hard can stick with Richter in order to retain your sense of manhood and self-respect.

But whether youre playing as Richter or merely suck, you can look forward to plenty of trouble in the form of towering stacks of dragons skulls that bar your way by belching jets of flame . . . robed skeletons kneeling in position with sights firmly fixed upon you from behind their oiled muskets . . . or gaunt suits of armor twirling their long spears to deflect your attacks while their fellows pierce you from the walkways above and below. Upon meeting their frequently gruesome ends these horrors release pain-filled wails; such minute attention to detail abounds, from the tiny moths that gather about glowing lanterns, only to swarm around your character after (s)he smashes their source of light, to the ghastly green thing that you just know is going to appear in place of your reflection as you stroll by a hall of mirrors. 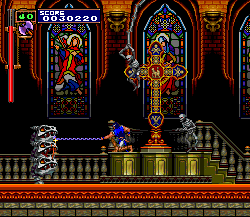 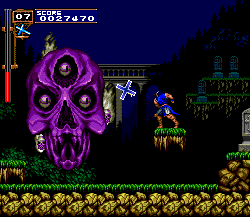 A trip to an ornate cathedral introduces skeletons clutching links of human bones to swing wildly to and fro before priceless stained glass windows, but perhaps youd prefer wading through the reddish mud  and gooey mudmen  in the rocky crags of a mountainous cemetery. Should you chance upon the Grim Reaper lurking somewhere within the gently rocking belly of a haunted ship, apparently mulling over whether or not his fashionable makeover is quite working out, youll discover that his old friends arent very far behind. Prepare to confront one familiar face after another as each level guardian from the very first game emerges from the depths of the underworld, accompanied appropriately enough by a menacing rendition of the original boss theme. And what fate has befallen the ubiquitous clock tower and its perilous gears? One shouldnt need even ask.

Dracula X is a ghastly skeleton cloaked in fetid rags and howling in rage as its cranium is sliced clean from bleached-white shoulders amidst a shower of blood. Yet its also cheeky little Maria hanging on for dear life astride a giant white tiger as it rockets across the screen with a destructive vengeance. Its a thrilling platformer rife with fierce action, and yet wrapped up in an overall sense of exploration and adventure. The brilliance of this rondo of blood is in its contradictions, but one thing but one thing remains constant throughout: that of an experience with the scarcest of peers.

What a wonderful night to have a curse.

If you enjoyed this Akumajou Dracula X: Chi no Rondo review, you're encouraged to discuss it with the author and with other members of the site's community. If you don't already have an HonestGamers account, you can sign up for one in a snap. Thank you for reading!

© 1998 - 2022 HonestGamers
None of the material contained within this site may be reproduced in any conceivable fashion without permission from the author(s) of said material. This site is not sponsored or endorsed by Nintendo, Sega, Sony, Microsoft, or any other such party. Akumajou Dracula X: Chi no Rondo is a registered trademark of its copyright holder. This site makes no claim to Akumajou Dracula X: Chi no Rondo, its characters, screenshots, artwork, music, or any intellectual property contained within. Opinions expressed on this site do not necessarily represent the opinion of site staff or sponsors. Staff and freelance reviews are typically written based on time spent with a retail review copy or review key for the game that is provided by its publisher.