Shadowrun chooses to start where most games end: the death of the main character. You join protagonist Jake Armitage as he's being filed away by morticians, watching as his now cold body is bagged, tagged and iced. Horrifyingly for them, but somewhat thankfully for players expecting more than a five minute game, he's quick to awaken from his so-called eternal slumber, kicking open his mortuary slab's drawer and stumbling around a little as the undead are wont to do.

Long used to corpses springing back to life, the brave and experienced morticians flee to the safety of the stationery closet, screaming out claims of another pesky zombie awakening. Had they hung around, they'd have been pleased to note that Jake's laundry list of problems doesn't include that particular vice. Instead the poor guy is disorientated, in quite the degree of pain and somewhat confused to why he has no idea who or where he is.

Chained to his newly found lease of life, Jake ransacks the place for any serviceable items and stumbles out the front door into the streets. Here, his misfortunes continue. He quickly finds himself verbally assaulted by a passing gang member and informed that he was a well-known target for professional hitmen. Though he learns he's widely believed to be dead, he's unable to extract further information about who he is or why he is such a wanted target from his reluctant subject. Unwilling to respond to further questioning, the youth flees with Jake in hot pursuit. 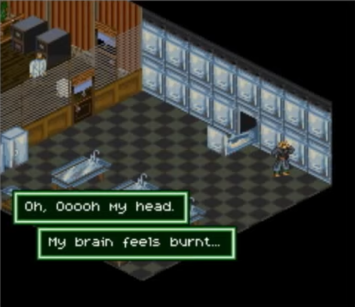 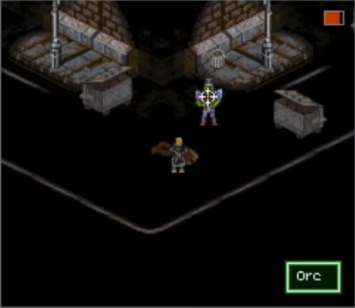 Running into a secluded alleyway will prove to be your targets undoing. He encounters a hostile gun-totting ork who quickly informs the unlucky ganger of his folly, guns him down heartlessly, then turns his attention to you. Shadowrun has absolutely no problems with killing you off so early on in the game, and if you hope to survive, you'll have to scoop up a firearm from the recently deceased kid and defend yourself.

Happily, this Gangland ork is particularly weak; you'll only need to waste a few bullets on him before he falls with an anguished yelp. With your first foe exterminated, your attention is caught by a small ruckus taking place in the very corner of the garbage-strewn back-alley. Upon examination, you find a small dog who informs you that he is your shamanic totem guide. He tells you that you have the ability to utilize magic within you, and following his vague instructions and mystic clues will help you awaken your true potential. He then disappears.

I know what you're thinking. Zombie outbreaks? Gun-totting orcs? Shamanical magic powers? Talking dogs? You ain't seen nothing yet!

What sets Shadowrun apart from the pack is the fact that it takes place in a pre-existing universe. Before it was a video game, Shadowrun was a moderately successful cyberpunk tabletop roleplay. Set sometime in the not-so-distant future, the human race experiences an age of awakening that allows mythical creatures to once again walk the earth. Through a virus that rewrites human DNA to mutate into forgotten species comes the rebirth of races such as the slender elves, stocky dwarves and fearsome dragons, amongst others. As an added bonus comes the rediscovery of magical forces, long dormant in the age of man.

But these old races have to be updated for a new world: a world where technology plays as big a part. Expansive corporations rule the globe with an iron fist, constantly powermongering and bickering in secrecy. To accommodate this trend, a fresh breed of mercenary has evolved from the underground. Sharing their name with that of the game, Shadowrunners utilize all the new skills they can, their loyalty and services always belonging to the highest bidder. 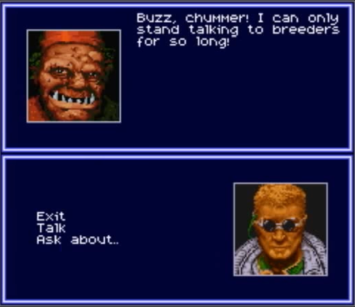 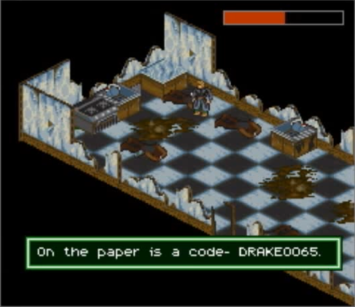 Mercs bring with them a deadly competence in all manner of firearms, while psychotic street samurai are packed full of cybernetic enhancements, allowing them quicker reactions and higher strengths than should be physically possible. Mages wield huge reserves of mana, able to command their mystical forces as they please. Deckers make use of the datajack implanted into their temples granting them the ability to transplant their thoughts directly into computers, allowing them to bypass secure networks and hack into sensitive areas effortlessly. There's others too, including the vehicular superior riggers, spiritual shamans or any mixed combination of the traits mentioned. The game takes place in a futuristic Seattle, a location that seems to be a popular hangout for such denizens of the underworld.

Not only can Jake hire the services of a shadowrunner or three should his credit allow, he can also learn to emulate them.

As noted, Jake isn't the most popular guy around and he can expect faceless henchmen to pop up in the most inconvenient of places. They'll snipe at our hero from building windows, toss grenades at him from behind dumpsters, or stand fearlessly in the open taking pot-shots. Mowing these would-be assassins down will reward you with two rather important rewards: currency and karma. Nuyen, Shadowrun's own brand of cash, allows you to purchase and upgrade all the equipment you'll ever want. Purchase Jake a nifty shotgun, a more robust armour or a cybernetic upgrade. Karma represents the games obligatory 'level up' system, and allows you to augment Jake's various statistics and skills. Plough points into making Jake a fearsome warrior, a mystical shaman, a cunning decker or a combination of the three. The call is yours.

Choosing to whip out your firearm and deal out your own brand of justice presents you with a crosshair (or pointer, should you wish to try nuking a target with magic) that you need to position over your less-then-friendly aggressors. And this is how the bulk of Shadowrun's interface works. The game presents you with an action/point 'n' click hybrid that for the most parts fits the game snugly. Collecting items lying around the game is made easy, and it's only when it comes to combat that problems arise. Battles play out rather monotonously: not only do you pump lead into a usually stationary target, but you yourself can't move while doing so. It's a little comical when gunfights are presented to the player as the two combatants standing stock still and only a few feet apart, plugging bullets into each other until one of them falls down. Even more so when, depending on your firearm and appropriate statistics, you will suffer your fair share of misses, irrelevant of how well placed your crosshair is. 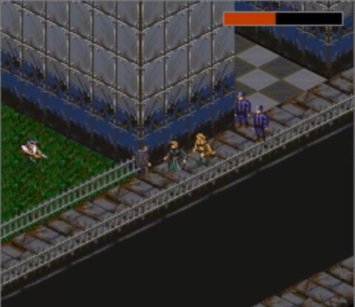 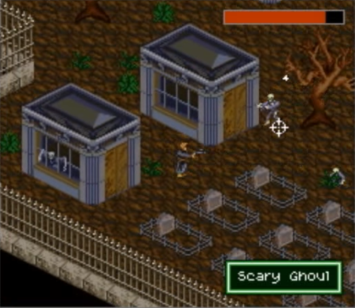 But that hardly matters when you and your crack team of runners are ploughing through the gang-chocked docks, with its collection of wrecked ships and gathering of mythical sea beasties. You don't really care about standing stock-still while your opponents' bullets ping off of your shiny new body armour, and your recently purchased assault cannon is employed in mowing people down with a flurry of critical hits. You don't care about the myriad of multiple targets that disrespect you with their presence and are fried by your hired mage's barricade of fire spells for their efforts. The same is true while fighting a rogue Rat Shaman in the vermin-infested sewers beneath Seattle, the two of you trading shards of pure mana in an attempt to gain the upper hand. The frantic action always more than compensates for the somewhat dodgy interface. You'll hardly notice any of the smaller flaws when you finally storm a corporate building full of hired goons with heavy arms. Take the building floor-by-floor, destroying the corporate security forces and abuse a newly-repaired datajack to unlock your decker skills, allowing you to run rampant in the computer networks within. Or simply hire a competent runner to do it all for you.

Because what Shadowrun presents you with is an engaging action game blessed with a deep veneer of freedom and housed in a pre-existing world oozing with depth and personality. Whether you are fighting for you life in a slums arena against the many clones of a competent mage, slicing through the ghoul population of the local cemetery or locked in combat with a towerblock-tall dragon, it's the sense of authenticity that shines through. Jake lives, breathes, struggles and fights in as believable a setting as you are ever likely to find. And when you transplant yourself into it, you are promised a thrilling experience that, despite the game's relative shortness, will stay with you for a long time after.

Besides, who hasn't wanted to hunt zombie terrorists down backed up by a slightly insane dwarf with a cannon twice the size as him, and a loquacious ork with twin uzis? This may be the only chance you ever get to do so.

If you enjoyed this Shadowrun review, you're encouraged to discuss it with the author and with other members of the site's community. If you don't already have an HonestGamers account, you can sign up for one in a snap. Thank you for reading!

© 1998 - 2022 HonestGamers
None of the material contained within this site may be reproduced in any conceivable fashion without permission from the author(s) of said material. This site is not sponsored or endorsed by Nintendo, Sega, Sony, Microsoft, or any other such party. Shadowrun is a registered trademark of its copyright holder. This site makes no claim to Shadowrun, its characters, screenshots, artwork, music, or any intellectual property contained within. Opinions expressed on this site do not necessarily represent the opinion of site staff or sponsors. Staff and freelance reviews are typically written based on time spent with a retail review copy or review key for the game that is provided by its publisher.